The Rolling Stones: It's only rock & roll but Tel Aviv loved it

Playing nonstop for two hours, the legendary British band easily won the crowd with their first appearance in Israel. 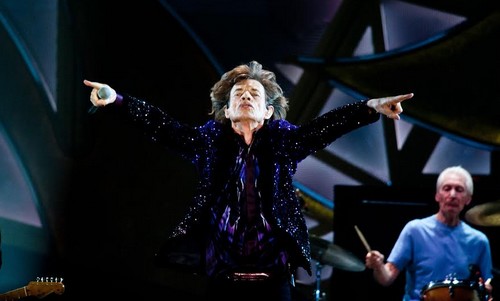 Eran and his wife, Orly, Jerusalem residents in their 30s, arrived at Yarkon Park on Wednesday night two hours before Rami Fortis was due to take the stage warming up for the first Israel performance by the Rolling Stones.“Despite the hefty cost of the tickets, I wasn’t about to miss this,” said Eran. “They may not be as great as they once were, but they’re still legends.”It turns out that Eran was errant in only one of his observations.The Stones may actually now be as phenomenal as they once were when they roamed the land as the “best rock & roll band in the world.”Seventy-year-old singer Mick Jagger had them at “Erev tov, hag Shavuot sameach,” (“Good evening, happy Shavuot”), his greeting to the 50,000 fans crammed in the sold-out park on a sweltering Tel Aviv night following the band’s opening song, “Start Me Up.”Video: Leah Lublin But even without Jagger’s endearing, Hebrew betweensong patter (like “Atem nehanim?” – “Are you enjoying it?” or “Hacol sababa?” – “Is everything cool?”) – the British superstars could have won the crowd over on musical merit alone. Playing nonstop for two hours in what was essentially a 19-song greatest hits revue – including “Jumpin’ Jack Flash,” “Tumbling Dice,” “Brown Sugar,” a powerful “Gimme Shelter” and “Sympathy For The Devil” – the Stones, as guitarist Keith Richards promised in a TV interview last week, were indeed “firing on 12 cylinders.”Richards in particular, beaming, white-haired and healthy, led the band into battle with ringing riffs and rakish grins, like he was in on a personal joke with 50,000 of his closest friends. And Jagger was simply a wonder of nature – running and dancing kilometers in a body a 20-year-old would be envious of, while belting out the classics, cheerleading and keeping the show running with unflagging energy and showbiz panache.Although they’ve long outgrown their beginnings as a pure blues band on their way to becoming the biggest rock & roll act in the world, those roots are still very much evident – on the show-stopping “Midnight Rambler” with special guest, Stones’ alumnus Mick Taylor, on the Richards-led gem “You Got The Silver,” which allowed guitarist Ronnie Wood to shine on acoustic slide, and on the still sinewy mid-’60s hit “Get Off My Cloud.” With stoic drummer Charlie Watts (whom Jagger wished a “Yom huledet sameach” (“Happy birthday”) leading to a crowd sing-a-long for the bashful septuagenarian) and like-a-rock bassist Darryl Jones holding the songs together with their unwavering rhythm, the Stones possessed a collective power and yin-yang tightness/looseness that takes about 50 years to perfect.
Video: Steve Linde The song selection could have been more imaginative and less reliant on the old war horses like “Satisfaction” and “Miss You,” but within the context of playing it safe, the Stones refused to stick to a written script, with open-ended jams, Richards- Wood guitar exchanges and the occasional missed cue (at one point during “Midnight Rambler” when Jagger wanted to go into a rap, he rasped, “Shut up, band” to the jamming guitarists), giving the evening a night-at-the bar ambiance.For the non-purists, it was the fine touches – from bringing students from the Buchman Mehta School of Music at Tel Aviv University’s Swiss Friends Choir onstage for the first encore, “You Can’t Always Get What You Want,” to Jagger’s good-natured Hebrew phrases read flawlessly off the teleprompter to the long catwalk that he frequently utilized and cajoled some of his band mates into roaming out in the midst of the audience – that elevated the show from a stunning concert to an event to be remembered.The Stones didn’t make any political statements, or unscripted comments like Elton John, Paul Simon and Leonard Cohen made during their respective shows here. Richards came closest, saying “It’s great to be someplace new,” before throwing it away with his stock punchline, “Hell, it’s great to be anywhere,” referring to his previous precarious lifestyle.But it wasn’t a night for political statements or slogans against the BDS movement. The Stones showed support for Israel by playing their hearts out, and treating Israel like they treat every country they visit – like we’re the only place on Earth they want to be.Spent from the heat and revelry, Eran and Orly, shirts clinging to their backs, trudged out of the park exhausted but exhilarated.“It was amazing, so much better than I had hoped for,” he said. “It was worth every shekel.”Echoing that thought, it wouldn’t be accurate to say that the Stones were phenomenal for their age. They were phenomenal.Period.