Between 2006 and 2008, lots' hammer prices exceeded, on average, their pre-sale estimate ranges.

By DANI KOREN
MAY 4, 2010 13:50
art market graph 311
(photo credit: Courtesy)
Advertisement
A snapshot of the photography art market showed clear signs of recovery in the second quarter of 2010 as mid-April sales held in New York achieved outstanding results. This initial market rebound follows a significant downturn since 2007. In 2009, photography auctions grossed 71% less than in 2007 and 60% less than in 2008.This contraction is most evident in mid-end and high-end lots. Fewer mid-end items were offered and sold, although these lots successfully maintained price levels of former years. High-end items, however, suffered a sharper downfall in the number of lots sold and a decline in hammer prices. In 2007, 152 items were sold for a hammer price of at least USD 100,000. In contrast, 2009 sales yielded only 15 items that were sold for the above price. Average prices of high-end items also dropped approximately 25% between 2007 and 2009.Between 2006 and 2008, lots' hammer prices exceeded, on average, their pre-sale estimate ranges. However, 2009 hammer prices were less remarkable as they barely topped the average high estimate.Three leading international auction houses - Sotheby's, Christie's and Phillips de Pury & Co - presented outstanding modern and contemporary selections, featuring notable photography masters as well as contemporary artists. This four-day mid-April New York celebration attracted much attention, achieving excellent results.The April 13th Sotheby's Photographs sale ended with 196 lots sold out of 244 offered, with a high percentage of sold lots exceeding their high estimates. The top lot sold was Edward Weston's Nautilus, 1927, which was bought for USD 1,082,500.Christie's Three Decades with Irving Penn sale on April 14 turned out to be a "white glove" sale (in which all lots are sold). The sale, totaling USD 3,840,635 with a top lot of USD 314,500, demonstrated a strong demand for the work of the late artist.The following day, as many as 48 lots out of 180 offered were bought-in at Christie's Photographs sale, although several items achieved hammer prices at twice their high estimates. The sale's top lot was Woman in Moroccan Palace by Irving Penn, which was sold for USD 446,500.Later that day, 86 lots were sold at the Selections from the Baio Collection of Photography sale, all of which resulted in or above the estimate range.The last Photographs sale of the week - held at Phillips de Pury & Co - offered 349 lots with a high presence of contemporary artists' work listed with rather attractive estimate ranges. Edward Steichen's Wheelbarrow with Flower Pots from 1920 was the sale's top lot, selling for USD 194,500. It was Steichen's The Pond-Moonlight (1904) that sold for the second highest price ever paid for a photograph - USD 2,928,000 - at a February 2006 Sotheby's New York auction. The top slot belongs to Andreas Gursky, whose 99 Cent II Diptychon (2001), was sold at Sotheby's NY in February 2007 for USD 3,340,000.The following table clearly demonstrates the 2009 downturn in the photography art market. It illustrates price range distribution of lots sold in photography auctions by leading auction houses from 2008 to 2010: 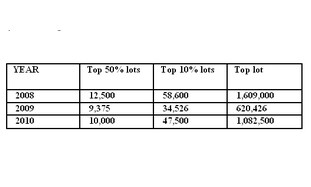 In 2008, top hammer prices and other exceptional works auctioned for over USD 58,600 accounted for 10% of auctioned lots. In contrast, the top 10% in 2009 were auctioned for over USD 34,526, a 40% drop. In 2008, over 50% of lots were auctioned for over USD 12,500 compared to only USD 9,375 in 2009. So far, the results of 2010 signify a recovery as all price segments are climbing back towards their 2008 levels.The various mid-April auction results clearly demonstrate a renewedconfidence in the photography art market, showing firm demand for thismedium. The great start of 2010 and forthcoming auction results willlead the trend line and set the pace towards expected market recovery.Traditionally, the photography market is undervalued compared to othersegments of the art market. One can purchase quality work bywell-established artists for a relatively low price. In addition, thismarket segment is less volatile than contemporary art. It has its bluechip and well-established artists with a growing market and risinginterest.The photography art market most definitely holds unrevealed potential.Will this find expression in the near future? The Sotheby's Photographsfrom the Polaroid Collection sale next month will prove an excellenttest.Article provided by MutualArt.com - a personalized art information service covering thousands of sources across the web.
Advertisement
Subscribe for our daily newsletter