The long-running cartoon follows in the footsteps of The Simpsons, and looks at the most enduring of conflicts.

By SARA MILLER
South Park Middle East 370
(photo credit: Courtesy South Park Studios)
Advertisement
It has been parodied by The Simpsons, fantasized about by novelists, and even resolved thanks to a , and now notorious satirists Matt Stone and Trey Parker have turned their own South Park cross-hairs on the Middle East conflict. 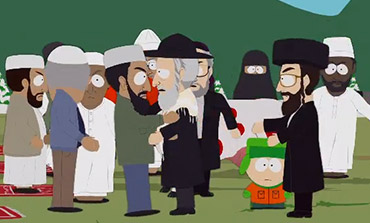 In the latest episode of the no-holds-barred cartoon, the discovery of a red heifer has a positive impact on decades of discord, with Jews, Muslims and Christians gathering together in harmony in the Holy Land. (The use of a red cow highlights certain conscientious research - or inside knowledge of Jewish law two thousand years ago.)  Unfortunately, the miraculous find is the work of South Park's resident sociopath Eric Cartman, whose actions have unwittingly led to a positive outcome - the very opposite of his intent. Of course, Cartman cannot resist threatening to destroy the peace, much to the chagrin of his Jewish chum Kyle Broflovski, who succumbs to repeated humiliation in order to maintain the fragile calm. The two travel to Jerusalem, talk to God and even appear on stage with Van Halen. The show is never shy of tackling contentious issues - it recently focused on the controversial trial of George Zimmerman for the murder of Trayvon Martin, and has in the past touched on themes such as homophobia and prostitution.  This episode, in the seventeenth season of the show, takes aim at religious extremism and bullying, as well as the anti-Semitism exhibited by Cartman on a regular basis. But it also examines the lengths people will go to in the quest for peace, and the way in which one character handles sudden martyrdom. If you like gross-out humor, strong language and crude imagery with your satire, then this is for you. If not, steer clear.