From Burberry, to Vivienne Westwood and Topshop Unique, it has been a smashing week as British designers showcased their Fall/Winter 2011 collections.

By KATHRYN RUBIN
Topshop Unique 311
(photo credit: Associated Press)
Advertisement
Only a few short hours after the New York Fashion week came to a close, fashionistas, celebrities and most importantly magazine editors and major department store buyers, set their sights across the Atlantic on the royal city itself - London. Five days, 65 catwalks, 45 smaller salon shows, tons of private events and presentations, the London Fashion week is the second of four back to back runway events this winter. Considered the most creative of all the shows, London Fashion Week is renowned for showcasing new cutting edge-talent side by side established British brands. While the British Fashion Week is notorious for discovering hot new talent, iconic English designers - from Burberry, to Vivienne Westwood, to Kate Middlleton’s favorite, Issa London – still rule the runways. RELATED:
Trend spotting: The looks of a year to come
The looks of New York Fashion Week The chosen one: BurberryThe most anticipated event of the week, Burberry showcased its Fall/Winter collection on Day Four of the London Fashion Week. A parade of vivacious colors, the Burberry Prorsum show embraced plaids, fur and piping as the new collection had a definite 60s chic feel about it. However, while chunky wedges and retro dressed made an appearance, it was the outerwear that truly dominated the catwalk at Monday's show. 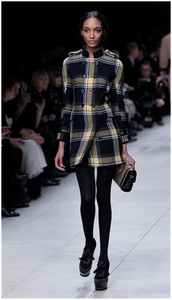 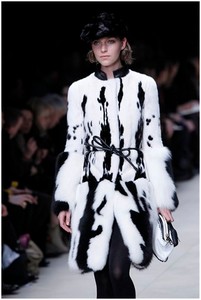 Burberry CoatOnce upon a time, the British super brand made its name with a simple coat, and it looks like the new line is returning to its roots with its "Coats of Many Colors" collection. From plaid and tweed, to fur and cashmere to bold shades of purple, orange and blue, models graced the runaway at Kensington Gardens in some version of this iconic piece. Decorated with heavy military buttons, to kimono sleeves, to dropped waists and half belts, all the coats were modeled with matching arm candy and "flat caps."For those who could not get front row seats, Burberry live streamed the show in London's Piccadilly Circus – a world first – as well as 40 other global locations. “Here we go round the mulberry bush, on a cold and frosty morning”And it most certainly was a frosty morning last Sunday, when Mulberry showcased its new Autumn/Winter 2011 collection. Inspired by Roald Dahl’s Fantastic Mr Fox, the British brand's creative director Emma Hill transformed the Claridges Hotel lobby and ballroom into a fairytale fantasy forest decorated with stuffed foxes, silk birds perched in trees and the sounds of owls hooting softly in the background. The “English countryside” theme mirrored the luxury designer’s collection, which emphasized heritage fabrics and traditional ladylike ensembles. Models graced the runway in pleated midi length skirts, gold lame maxis, duffel jackets in elephant cord and quilted trench coats. Colors hovered around somber autumn hues of deep blues, violets, khakis and some metallic shades, combined with classic camels and browns; however intense blasts of color – electric green, bubbly pink and lavender - did pop up now and again.  Since it was Mulberry, all eyes were focused on the accessories, specifically hand bags, which included the new Polly Pushlock. Other bags were given face-lifts, including the Bayswater’s bag, which earned poacher-style straps and stud closures to form the Heritage Bayswater satchel and the famous Alexa bag, which was revamped with fox locks. 101 DalmatiansHigh street brand Topshop Unique was another British designer that drew its inspiration from a children's classic. As the lights began to dim at the show, the infamous Cruella de Ville theme song began to play. Moments later, one by one, models came bounding down the runway decked out in Dalmatian prints. Turning the catwalk into more of a “dogwalk”, the classic monochrome print was everywhere to be found – from the show’s opening furry white coat covered with black Dalmatians spots (Ms. De Ville's dream), to platform ankle boots, to collars and trims, to belts and shawls. Even the model’s hair was styled into “dog-ear” buns, while their nails were painted with black and white spots and their noses tinted with black triangles. While the Dalmatian print led the pack, greyhounds and whippets also made an appearance as prints on blouses and shoes. Besides the spots, other eye-catching prints included art deco 1930s skylines - with one stand out piece based on the Brooklyn Bridge. 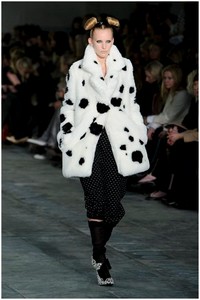 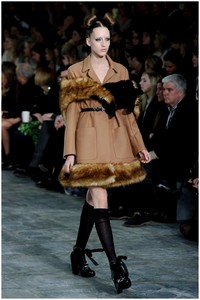 Topshop UniqueA royal interest When future princess Kate Middleton appeared at her engagement announcement in an Issa royal blue silk jersey dress, the British brand was immediately propelled into the glaring fashion spotlight – making it one of the most sought-after tickets this week. With all eyes now focused on the British brand,  Issa's designer Daniella Helayel showcased her new Fall/Winter collection on Day Two of London's Fashion Week – Helayel's first set of new designs since her royal publicity boost last year. From silk jerseys in warm colors to a bold, full-skirted red coat and a beaded hunter green gown suitable for a "royal" event, the wearable collection seemed almost fitting for a London girl (or even a future princess) that is seeking the perfect balance between sophisticated and casual hip. The new collection was filled with classy earthy prints, varied skirt lengths (including maxi, midis and even minis) rustic colors, elegant cut cocktail and low back monochrome dresses.  Accessories varied from eye-catching orange gloves to noticeable, yet understated, jewelery. 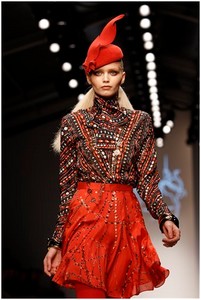 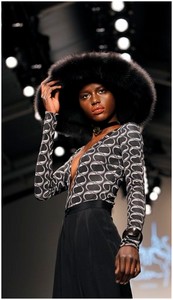 Isa LondonThe Queen of HeartsYet another designer that seemed to draw inspiration from a fairytale, Vivienne Westwood's Fall/Winter 2011 Red Label collection was a twisted mash up between the Royal Family and Alice in Wonderland.  The iconic British designer, who showcased her latest collection at the Royal Courts of Justice on Day Three of London's Fashion Week, sent some models down the runaway with their face painted in gold, red or blue while others sported crowns made from felt, or even their own hair. The "mad hatter" take on the regal inspired look was portrayed in all of Westwood's designs, from skirts paired with striped shirts, to pinstripe suits, tartan prints, crooked ties and patchwork jackets. Wool skirt suits, corset dresses and silk leopard print, were all given the Westwood eccentric touch; however, it was the multicolored feather cape that really caught the audience's attention. 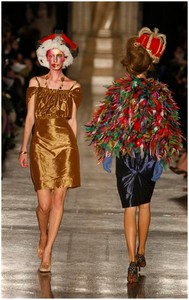 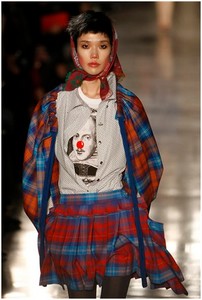 Vivienne Westwood Red LabelUp next: Fashion Week says ciao to Milano, as some of the biggest names in the industries gear up to showcase their new designs on the Italian runways.
Advertisement
Subscribe for our daily newsletter