Mad for Mad Men’s wardrobe? Love Audrey's simple and yet elegant attire? You're in luck then, as these two decades 'lady like' looks are back.

By KATHRYN RUBIN
JANUARY 13, 2011 10:45
60s fashion
(photo credit: Associated Press)
Advertisement
When most people think of 60s fashion, images of shockingly teeny tiny miniskirts, tie-dyed shirts, peasant blouses and go-go boots, swirl to mind; however, while these retro styles are some the looks of 60s, they belong to the later part of the decade. This year fashion designers will be traveling slightly further back in time – to the early 60s and late 50s. Think Jacki-O's infamous pink  suit, think Audrey Hepburn as Holly Golightly in Breakfast at Tiffany's, think classic chic as the styles of the late 50s and early 60s make a graceful "ladylike" entrance. Related:
Trend forecast: Blast from the past – are the '70s back?
It’s all in the detail Here are some of this era's classic looks that will make an appearance this year: Your shoes will purr...
Often thought of as the ugly step-sister of the high heel shoe family, the 50s kitten heel is on comeback tour this year.  While at first the kitten's appearance on the catwalk was not so widely applauded (the 1-1 1/2 each heel does little to lengthen or define our legs and is generally considered more sensible than sexy), its appeal has gradually grown as more and more designers have adopted the style into their collections.  And whether you like it or not, dressed up in bold tones and decorated in exotic patterns, this once seemingly plain shoe will strutting its way into this year's spring/summer fashion lines. Your eyes will roar...
Cat eye sunglasses first became popular in the 50s and 60s, when the style icon herself, Audrey Hepburn, immortalized the look in the timeless classic - Breakfast at Tiffany’s.  Once seen only in black and relatively simple tones, the modernization of the look will have us sporting these glasses in bright monochrome tones as well as wild (cat like) prints. While traditionally, the frames high arch typically suits lean and long oval shaped faces, this year will see it available in two different versions – the extremely high arched frame as well as a softer, more docile scoop – making this once passé look wearable by (almost) everybody. 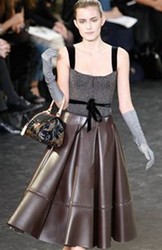 The full skirtNot so "desperate housewives"
The 60s are often associated with the birth of the miniskirt; however this is not the only skirt that defined this infamous decade. Before the rise of the mini (in the late 60s) woman's fashion gave way to a different (and longer) look.  While short skirts have ruled our closest for some time now, this year fashion designers will be lengthen our hemlines as they return to slightly more demure "full" skirt that flowed through the late 1950s and early 1960s. To add a touch of the 21st century, designers have well designed this piece in an array of fresh pastels as well as floral patterns and even stripes. Pucker up and be bold...
By far the most noticeable style on the runway, the statement lip will be one of this year's  biggest trends. Inspired straight from the 60s notorious big bold and red
lips (as seen on Mad Men), this year will see woman pucker up and dab on lipsticks and glosses from hot pinks to dark berry shades to even bright orange.  A lady like do
What better way to complement all these 50s/60s clothes than with these decades infamous do. Spring/Summer 2011 fashions shows saw models pin up their long locks and sport the notorious vintage twist.  Leading the pack is none other than the infamous "beehive" hairstyle (or B-52).  Invented by Margaret Vinci-Heldt in the early 60s, this over the top do, reached new heights in the mid 60s – becoming a symbol of this fashion classic era.
Advertisement
Subscribe for our daily newsletter