By YONI COHEN
Eliad from Molly Blooms bar
(photo credit: Yoni Cohen)
Advertisement
Somewhat of a Tel Aviv institution among locals and tourists alike, there’s never a dull moment at Irish pub Molly Blooms. With a great selection of Irish whiskies and a relaxed atmosphere, it’s clear to see why the place has a loyal following. Bartender Eliad fits right in with a laid-back attitude and a desire to put people at ease. He effortlessly serves up the drinks behind the bar and uses his natural charm to entertain anyone who walks through the door. When not bartending, Eliad can be found focusing on his passions, including art, music and writing.How did you get into bartending? A few years ago I needed a job that I could work both full-time and part-time, and I also needed a job where I could make a lot of money. I’d always thought of bartending because it involves interacting with people and I’m very good at that. I am very much a people’s person. Where did you learn the trade? I read a couple of books on bartending in a week or two and I figured I pretty much had it all covered. I went to a restaurant in Petah Tikva and was lucky enough to start working there straight away. Then I just worked my way up. 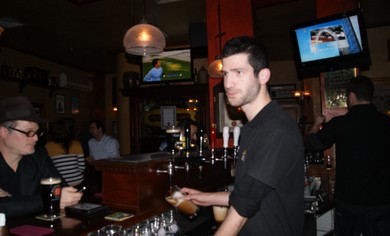 Molly Bloom
Who is the most interesting customer you’ve ever served? Here we get so many interesting characters. I was working this Friday and into the pub walked this amazing blond girl with her short fat boyfriend. It turns out that she is Victoria’s Secret model and had just converted to Judaism. Among the crazy things that she said to me that night was, “Honey, come to LA and I will introduce to all the pretty girls.” I would say she was one of the most interesting customers.Who would be your dream customer as a bartender? There are so many people. Can I name more than one? Yes of course.Ernest Hemingway, Kurt Cobain, Bob Marley, Bruce Lee and Batman. So many people.What drink would you want to serve them? Ernest Hemingway – is a cognac kind of guy, you know classy. Kurt Cobain – either beer or even whiskey and coke. Bob Marley –rum – he’s from the Caribbean. Bruce Lee – sake [laughs]. No that’s racist. That’s bad. And Batman, he would just drink absinthe right out of the bottle. What is your favorite drink to serve? Well my favorite drink is whiskey. How do you like it? Neat, maybe one ice. I have to say that we have a lot of good whiskey here. I like people who drink what I like. What is your least favorite to make?Irish coffee.Why? Because it involves so much preparation. All the whipped cream and making the coffee – it’s just a big headache. What is the best tip you have ever received? I did get good tips a few times from people who are just so happy and want to give you lots of money. I usually refuse but there was once this Irish guy and we really connected and at the end he left a NIS 150 tip on a NIS 140 bill. I told him it’s too much but he just insisted. Sometimes it’s just because people don’t understand the currency. Like this one guy who when he asked “should I leave a tip?’ I said that it’s customary so he just got all the change out of his pocket and slammed it on the table so I thought maybe it was NIS 30 but when I looked it was all tens and fives so there was probably around NIS 150 there. I said it was too much but he had no idea how much the currency was worth. Even after I explained to him, he still left it. 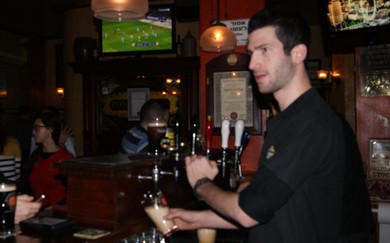 Molly Bloom
Do you get a lot of tourists here? Of course. Half of them are tourists.Because of the location? Yes.Does that create a nice atmosphere? Yes, a very nice atmosphere. I love the tourists. They are always interesting and it’s always fun to meet people from all around the world. Tourists are always up to something. What does it take to be a good barman? Every good barman is a bit of a megalomaniac. You have to be an attention seeker because the focus is always on you. You are always on show. You have to be a good talker and be interested in people otherwise you get bored easily. 2 Mendele Street (corner of Hayarkon) 03-522-1558
Advertisement
Hot Opinion