Ask the Barman: Make mine a double

No trip to Norma Jean in Tel Aviv would be complete without an explanation by bartender Orly Levinton on the the huge collection of whiskeys available.

By YONI COHEN
Bartender Orly Levinton 311
(photo credit: Yoni Cohen)
Advertisement
Is it a bar? Is it a restaurant? Is it a bistro bar? No, its Norma Jean. With its excellent food menu and extensive beer and whiskey collections, Norma Jean could fit any of these descriptions. Bartender Orly Levinton, who claims to be something of a whiskey expert, looks comfortable behind the busy bar talking about the drinks and making sure that all the customers are satisfied. With years of experience behind her, Orly takes everything in her stride, even as the place really starts to fill up.Set in south Tel Aviv’s Florentine neighborhood, Norma Jean boasts one of the largest whiskey collections in Israel, with over 220 varieties to choose from. Orly says that she loves nothing better than finding the perfect drink for each customer. A Chinese therapist by day, Orly fits in well with the relaxed and comfortable atmosphere at Norma Jean. She took some time out from serving up the great food and drinks to talk about who her ideal drinking partner would be and the time a married woman hit on her.

Photo: Yoni CohenHow long have you been making drinks?Thirteen years. Where did you learn to the trade?I did a course, but that was a long time ago. We learned to make all kinds of cocktails that people don’t even make anymore, like Tequila Sunrise.What’s the craziest night you’ve ever had?There was one night when a few people came in and this guy bought everyone drinks because he was celebrating making a [business] deal. I also drank with him, [drink for drink], although he was much bigger than me. I was completely drunk, and by the time I had finished the shift I couldn’t even count the money.  I went back to the storeroom and I banged my head and then I dropped a bottle of beer. You really have to do your job once while drunk to understand what it's like. Who would be your dream customer?A whisky lover. Someone who wants to try new drinks that they haven’t drunk before. I would love to ask them what they like so I could recommend them something. I would find them what they want.So do you consider yourself a bit of a whiskey expert?Yes. And I have learned a lot of what I know here at Norma Jean.What is your favorite drink to make?Whiskey. I like lots of different whiskeys, whether it’s American or Scottish. How do you like to serve whiskey?Neat, with water on the side. 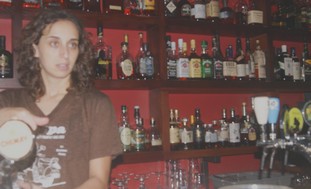 Photo: Yoni CohenWhat is your least favorite drink to make?Gin, because it’s the most non-Israeli drink. I know people like Arak, vodka and tequila, but gin is the worst!  Funny cocktails are also not so good.What is your pet peeve about being a bartender?Going to sleep very late. Especially here in Israel - people go to sleep at seven in the morning. What is the best tip you've ever received?Well the bill was NIS 150 and the tip was  NIS 100.
Who would be your ideal drinking partner?It would have to be someone like a master whiskey maker from Scotland from one of the great distilleries. 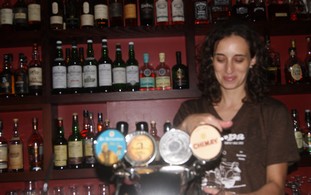 Photo: Yoni CohenWhy?Because if you appreciate your drink then you will be able to talk about your experiences, and about life in general. Talking about life when you drink is the best. It’s important that someone can appreciate a drink.How many people a night try to hit on you?It happens all the time. I have had a few weird encounters though. One time, there were two girls and two guys sitting separately at the bar. The boys on one side and the girls on the other. I quickly understood that they were in fact two married couples. One of the girls proceeded to ask me for my number. I was in shock. Her husband was sitting at the same bar. Do you have any tips for those looking to be a bartender?Always try to predict what people will need. If you see that someone has finished a drink then ask them if they want another. See what people need before they ask. Norma Jean, 23 Elephelet Street, Tel Aviv.Open Sunday to Friday from 6:30 p.m. till the last customer leaves. Saturday from 4 p.m. till the last person leaves. Not kosher.
Advertisement
Subscribe for our daily newsletter