Ask the Barman: Shaking up the cocktails with pride

By YONI COHEN
Barman at Evita 370
(photo credit: Yoni Cohen)
Advertisement
After a long winter, the gay nightlife in Tel Aviv has started to come alive once again and a whole host of events are heating things up. With an influx of tourists and anticipation of Gay Pride Week at the beginning of June, as well as the Eurovision Song Contest and Madonna’s upcoming concert, the gay bars of Tel Aviv have lots to celebrate. Evita bar just of Rothschild Street is, as always, leading the way when it comes to themed parties for the community. Somewhat of an institution in the gay bar scene, this intimate venue welcomes everyone and has an almost legendary following among gay tourists and locals alike.Unlike many gay bars in the city, there’s never a cover charge at Evita and it attracts people from throughout the community including recently-out-of-the-closet guys finding their way through the scene or older men who want to relax in a more laid back atmosphere. The crowd at Evita knows how to have a good time and barman Nimrod Livanov loves shaking up cocktails for the fun-loving punters. Although he is not gay himself, he has been known to flirt with the customers enjoying one of the bar’s signature themed events. With drag queens on stage, Eurovision music blasting in the background and an international crowd, it’s easy to see why Nimrod says he enjoys his job. Fresh out of the army, Nimord is currently saving up to go on his post-service “big trip” around the world. While it’s not the kind of place that he would choose to go out to with his friends, he says that the infectious good spirit has kept him there for over six months. When not serving up the drinks to the colorful crowds at Evita, Nimrod can be found at the beach hanging out with his friends and juggling another day job. Staying up all night behind the bar doesn’t bother Nimrod as he sees himself as a “night person” who can survive on very little sleep.

Click for special JPost features
How did you get into bartending?It happened by chance actually. A friend of mine gave me the idea to do a bartenders course while I was in the army. I really liked it so when I finished the course I started working at a bar near where I used to live in Karmiel during my army service. When I finished the army I came to Tel Aviv to work. So was Evita the first bar you started working at in Tel Aviv?Yes. As soon as I moved to Tel Aviv, I started working here.What’s the craziest night you’ve ever had behind the bar?Wow, I really couldn’t narrow it down to one specific night. There are so many crazy nights here. There are always surprises.Who is the most interesting customer you’ve ever served here?Here at Evita there are lots of interesting characters. All types of people from all over the world come here. We have group of Delta flight attendants that come here all the time and they love it here and they really like me. We are even in touch via email.So do you enjoy working in a place that’s popular with tourists?Yes. There all people from all over the world so it’s never boring. 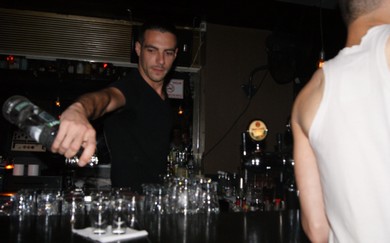 Who would be your dream customer?Katy Perry.Why?She seems like she’s a crazy kind of woman. I would love to have her sit at the bar and serve her alcohol. What drink would you serve her?I would serve her straight from bottle whatever it was. What’s your favorite drink to serve?I love making sours because they have a fresh and sharp flavor. I also love to make it with the shaker and pour it into the glass. I really enjoy making cocktails. What’s your least favorite drink to make?There’s nothing that I don’t like. 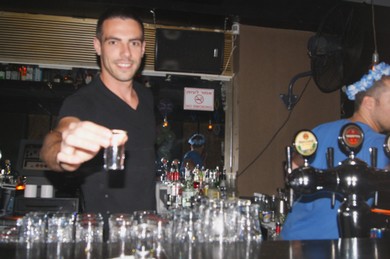 What do you think it takes to be a bartender?You need to be a social person that likes people. It depends what bar you’re going to work in though. For example, if you work in a dance bar like Evita then you need to know how to flirt. That leads me to my next question: Do a lot of people flirt with you while you’re behind the bar?Yes, all the time. Every day in fact.So it’s part of the job?Yes, you could say that.Are you gay?No.So is it fun that you have all these guys flirting with you?It’s a compliment at the end of the day. But it depends how it’s done.Are most of the barmen here at Evita gay or straight?I would say it’s a 50/50 mix. But do you think that most people who come here expect all the barmen to be gay?Yes definitely. It’s the first thing people think. Whenever I tell anyone that I work at a gay bar they automatically ask me if I’m gay.So do people who get here get disappointed when they find out you are straight?Yes, lots of them do. It happens a lot. But what can you do. It’s also important to remember that [straight] girls come here too. 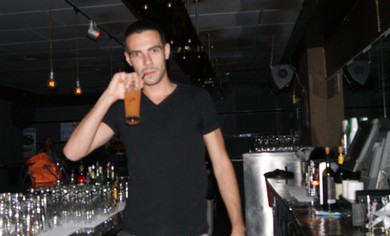 So do you enjoy that side of things then?Yes. I actually met a girl here once while I was working behind the bar. Really? That’s ironic for a straight guy to pick up a girl in a gay bar.Yes, it was a girl that came with her friends. She sat on the other end of the bar and near the end of the night I saw her sitting there and she looked quite sad and defeated so I asked her if she was alright. She said that no one was taking any notice of her because they aren’t interested in girls. So I said I’m not sure about anyone else in here but I like girls. The rest, as they say, is history.A lot of people say that gays know how to have more fun when they go out, do you think that’s true?At gay places I think there is definitely a more fun atmosphere. I don’t have too much experience other than here [at Evita] but I do think there’s a better atmosphere.31 Yavne Street Tel: 03-5669559Open every day from 9 p.m. till late
Advertisement
Subscribe for our daily newsletter