Nanuchka serves vegan food with a Georgian twist in the heart of Tel Aviv. 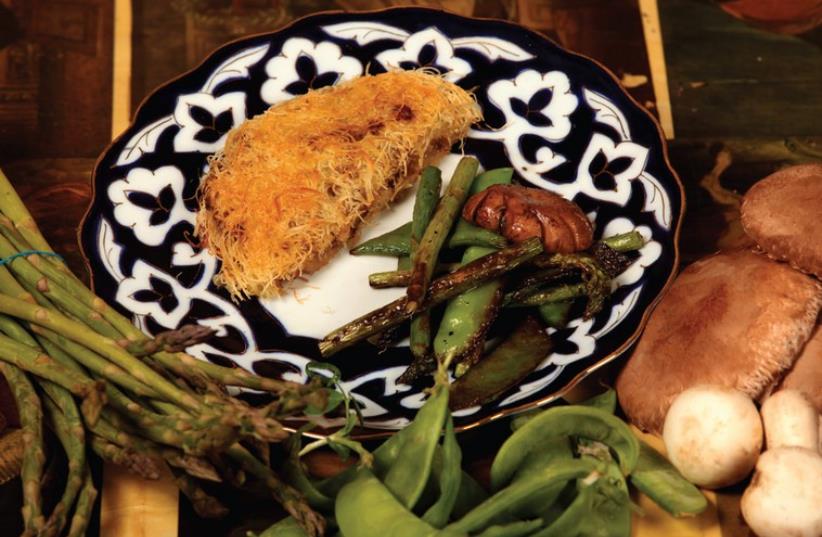 Nanuchka previously a hot spot of Georgian cuisine, turned vegan
(photo credit: Courtesy)
Advertisement
There are two Nanuchkas – the old one where almost topless women danced on the tables, diners lingered into the small hours over their steaks and wine and the epithet “debauched” appeared in some of the reviews; and the new one, sedate and pastoral, where clients bring their pets, the music is subdued and the atmosphere is genteel to a point.What happened? Nana Schreier, the owner and power behind Nanuchka opened the restaurant seven years ago. It served hearty Georgian food and quickly became a magnet for hedonistic Tel Avivians looking for an exciting night out.A few months ago, Schreier had an epiphany. She describes how she would surf the net after a busy night overseeing the restaurant and came upon horror scenes put out by the evangelical vegan community of Israel, pointing to the iniquities of the local meat industry. She discovered things about egg and milk production that shook her to the core. And within a few days she made a decision that was a huge gamble for the single mother of two – her restaurant was going to become vegan.“I had no idea if I was going to destroy my source of income or not – I just knew I had to do it,” she says.To her amazement, Nanuchka became more popular than ever.Today, it is an established part of the Tel Aviv scene, serving vegan food with a Georgian twist.I was invited to sample the food and took as my companion a vegan of several years’ standing who I knew would really appreciate what was offered. It turned out to be a very interesting evening with some flavors and combinations that were totally new.The place, on Lilienblum in the heart of Tel Aviv, is in an office building but once inside, one could be in any colorful pub in a Bohemian part of any city.Indoor gardens, exotic décor and vivid old floor tiles brought from the older location of the restaurant all add to the unconventional feel of the place.We were seated in the back garden, surrounded by frangipane and bottle brush trees with tall buildings all around. Our waiter brought the Veganshvili menu, a nod to the Gruzini (Georgian) origins of the restaurant.For a first course, we shared a plate of Phalli (NIS 57) – several different salads served up in aesthetic mounds on a large platter. This came with Lavash, Georgian bread that was crusty, slightly oily and delicious. The accompanying tehina was very creamy and garnished with pickled lemon – an excellent combination.The salads included mangold leaves chopped with walnuts and spices, vine leaves stuffed with rice and almonds, thinly sliced kohlrabi with a piquant dressing, a fairly conventional beetroot salad, eggplant salad and sliced eggplant stuffed with nuts and herbs. All were tasty and light, far from the traditional idea of heavy Georgian food.For my main course I chose a mushroom pirashki (NIS 55), advertised in the menu as Georgian dough stuffed with five kinds of mushrooms. This was totally scrumptious, the yeast dough having been rolled out very thin and the filling substantial, with a lingering flavor of cilantro.My companion had spinach and nut Hinkali – stuffed dumplings served with soya yogurt. (NIS 55).Both dishes came with tomato salsa as a sauce.Our friendly waiter, Yotam, insisted we try a dessert and brought us something not even on the menu, a rich layered chocolate cake with a nougat base and a topping of chocolate sauce. (NIS 38). It was superb and we relished every mouthful.We left the restaurant happy and satisfied, knowing that we had enjoyed an excellent meal and no animals had suffered in the process.The writer was a guest of the restaurant.Nanuchka
Vegan
30 Lilienblum St., Tel Aviv.
(03) 516-2254 Open Monday to Sunday, 12 noon until 5 a.m.
Advertisement
Subscribe for our daily newsletter