"No German MP should ever be associated with a global campaign seeking demise of the Jewish State.” 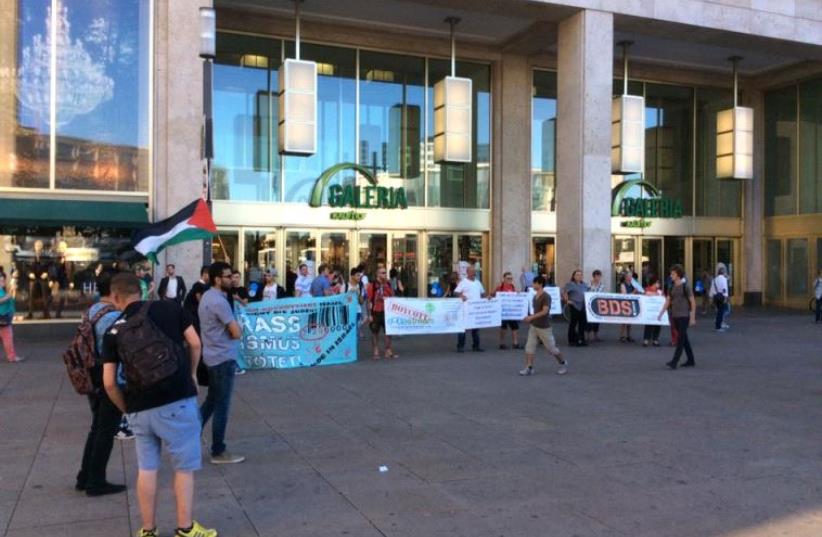 BDS activists in Berlin.
(photo credit: ACTION FORUM)
Advertisement
The German federal government along with authorities in the city-state of Berlin refused to take action against three MPs who are on the advisory board of a Boycott, Divestment, and Sanctions (BDS) entity targeting Israel in ostensible violation of an anti-BDS Bundestag resolution.The Jerusalem Post reported on Thursday that the US State Department took three alleged anti-Israel German MPs to task for engaging in pro-BDS activities with the German-Palestinian Society—an organization that promotes the destruction of the Jewish state. When asked about David Peyman's comments, the deputy special envoy to combat antisemitism for BDS, Eurasia and special projects in the US State Department, the German foreign ministry told the Post that “it is aware of the statements … but we do not comment on them. The federal government rejects BDS and has repeatedly made this clear.”Heiko Maas is the country's foreign minister, coming from the social democratic party. The social democratic party MP Aydan Özoguz is on the advisory board of the pro-BDS group.The three MPs are ostensibly in violation of their political party's vote not to support BDS activities or BDS groups contained in the 2019 resolution. Rabbi Abraham Cooper, the associate dean of the LA-based human rights organization Simon Wiesenthal Center, told the Post that “This is a pivotal moment for German leaders to emphasize the non-partisan commitment of leaders in all parties to reject anti-Semitic and extreme anti-peace BDS. No German MP should ever be associated with a global campaign seeking demise of the Jewish State.”Cooper added that “Key figures in all mainstream parties need to send that message loud and clear to every Parliamentarian in their party.”The Post reached out to the recently appointed official in charge of addressing and combating, according to critics, the rise of antisemitism in Berlin. The official, Samuel Salzborn, refused to comment on the BDS activities of the MPs in Berlin. The spokesman for the Berlin agency responsible for combating discrimination, Sebastian Brux, declined to comment.It is unclear if Salzborn and Brux intend to shield the "Red-Red-Green" government – made up of the Social Democratic party, the Green party and the Left party – from criticism. Christine Buchholz, a MP from The Left Party, is on the board of the pro-BDS group. Buchholz has defended the “resistance” of the terrorist movements Hamas and Hezbollah against the Jewish state.Politico's chief European correspondent, Matthew Karnitschnig, asked on Twitter, "How can German MPs belong to a group that openly supports BDS?"The Bundestag defined BDS as an antisemitic movement that has parallels to the Nazi's "Don't buy from Jews!" campaign of the 1930's.Volker Beck, a Green party politician, faced criticism on Twitter from the German-Jewish anti-BDS activist Malca Goldstein-Wolf for his alleged failure to confront the Green party MP Omid Nouripour, who is on the advisory board of the pro-BDS organization.Goldstein-Wolf tweeted about Beck: “It is shocking that you have to put pressure on people who present themselves as friends of Israel and Jews and yet look the other way when injustice happens in their own ranks. Only taking action when it fits into his stuff shatters credibility. Sad.”Beck frequently criticizes BDS activities but has largely gone silent about his party’s pro-BDS campaign activities and pro-Iranian regime conduct over the years.Two politicians, the Frankfurt deputy Uwe Becker, and the Free Democratic party MP Olaf in der Beek, have said that the MPs should resign from the German-Palestinian Society. Olaf in der Beek was on the advisory board of the German-Palestinian Society until May. He resigned becuse the pro-Palestinian entity refused to disavow the BDS campaign against Israel.A Post query to German Chancellor Angela Merkel’s office was not immediately returned. Felix Klein, the federal commissioiner to combat antisemitism, has refused to publicly condemn nor comment on the alleged antisemitic BDS activities of the three MPs. The Israeli expert on German antisemitism, Arye Sharuz Shalicar, tweeted about the three MPs: "When German politicians are in cahoots with antisemites who boycott 'Jewish' things, then it reminds of the darkest days of German history and under no circumstances should be tolerated. Period."Shalicar, who was born in Germany and has Iranian Jewish parents, has written two books in German about contemporary antisemitism in the federal republic.