I'm Disgusted with my Prime Minister!

By LEON KUSHNER
Advertisement
I'm a proud Canadian. Always have been. But I'm disgusted with Justin Trudeau, our Prime Minister.

I'm also a proud Jew and as any such person would do, we have an obligation to bravely stand up to anti-Semitism or anti-Zionism (the 2 are really one and the same). I have been an activist since childhood for Jewish/Israel causes and I am proud for all of my efforts in this regard.

We were blessed with (in my humble opinion) the best Prime Minister in our history with Stephen Harper who did great for all Canadians and especially the small Jewish population with his steadfast support of Israel. A tiny little country, always under existential threat from mostly a super large Muslim dominated Middle East. So she well deserved the world's support but mostly got world condemnation except for the odd state leader, like Stephen Harper. 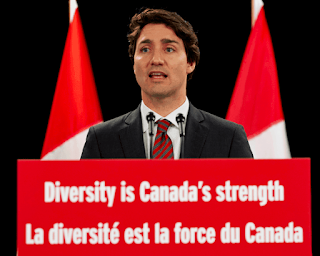 Fast forward to our sitting Prime Minister, Justin. He has proved himself consistently as no friend to the Jews while madly in love with the Muslim world.  When he first got elected I dubbed him Obama light. The truth is actually quite different. Thankfully he only rules Canada and Canada is very far from a world power. Because if it was, the world would be a darker place with Justin at the helm. While most people on the right (those who didn't vote for him or his Liberal party) see him as a good looking fool, I see him as a dangerous idiot.

1. He recently quietly gave a convicted Muslim terrorist (who happened to be born in Canada), Omar Khadr, 10.5 million dollars and a public apology because he was held in a US prison for killing a US medic in Afghanistan years ago.

2. Our federal food inspection agency decided to ban Israeli wines coming from Judea and Samaria (West Bank) with the label 'Made in Israel'.

Even many on the left who support Trudeau admit that he made a mistake (ie. went too far) on the Omar issue # 1.  To me this is offensive to give my money as a taxpayer to an unrepentant murderer and worse still try to hide it! He and his administration along with our national government sponsored media giant, the CBC, have made Omar into a hero or at least are actively trying to do so.

It reminds me of how the PA or Hamas glorify suicide bombers after they kill innocent Israeli civilians. Omar's family including his wife are active Al Qaida members so you can bet where his new found money will go. The family of the murdered US medic have a court ordered judgement against Omar. It will be very interesting to see what the Canadian courts will do: will they protect the new millionaire, Omar or comply with the US judgement and give that money to the American widow and her family? Either way, by the time our courts decide on it, Al Qaida will already have spent it.

Regarding the Israeli wine labelling issue, this reminds me of what pre-war Germany was doing.

There are hundreds if not thousands of disputed, international territories that our food inspection agency could have got involved with regard to labeling. But they focused only on Israel. Whereas we have serious issues with unsafe food products in dire need of inspection, they are very busy with this 'high profile issue'. This is antisemitism folks.

I'm not too worried about any economic repercussions to Israelis about this since the BDS movement tried this before and it backfired as supporters of Israel supported the Buycott and bought even more Israeli wine. However since this order comes directly from our federal government - now I am worried. The latest on this is that this order has been reversed. We shall see but the fact that it was even considered as an order in the first place is downright scary.

I can't say this enough: I am revolted with our Prime Minister. I'm saying this now before anti-Islamophobia bills which are currently being considered, are passed in parliament and in which case I could face prison charges for this blog.