Defense Minister Benny Gantz said: We equip the State of Israel with the capabilities to defend itself against developing threats.

Amid ongoing tensions with Iran, Israel’s Defense Ministry, the IDF and the US Missile Defense Agency successfully conducted a planned interception test of the Arrow-3 missile-defense system on Tuesday morning.

The test, led by Israel Aerospace Industries in collaboration with the Israel Air Force, took place in central Israel.

During the test, the Arrow system’s radar detected the target and transferred the data to battle management controL, which analyzed the data, established a defense plan and launched two Arrow 3 interceptors toward the exo-atmospheric target, successfully destroying it.

“The success of this test is an important milestone for Israel’s operational capability to defend itself against existing and evolving threats in the region,” the Defense Ministry said, adding that it was part of the IDF’s multi-year development program.

IAI President and CEO Boaz Levy said the system was tested in a “challenging scenario” against “future threats” and that throughout the test, it gathered “essential information that will be used by the defense establishment and the company’s engineers for the development of future technology.” 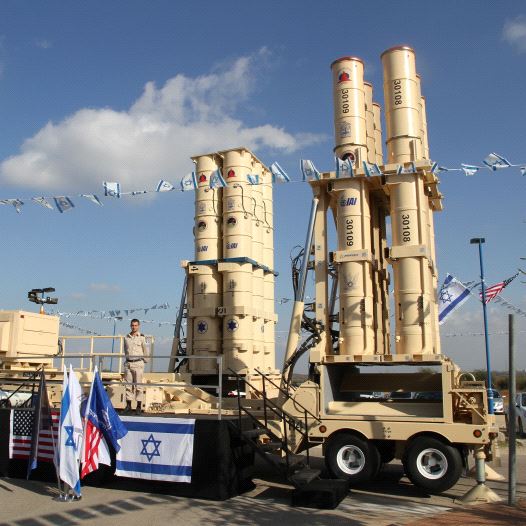 He said the two interceptors had “two different missions” with different flight paths to shoot down the same target.

The Arrow system, he added, “proved once again that Israel holds one of the world’s most advanced defense systems against ballistic missiles.”

The system was tested against targets similar in behavior to advanced missiles being developed by Iran as well as future threats that Israel might face, such as a ballistic missile barrage against the country.

Israel and the United States are concerned that Iran has continued to work on both its nuclear and ballistic missile programs despite international criticism.

Defense Minister Benny Gantz applauded the successful tests, saying, “With every step forward, with every development, we equip the State of Israel with the capabilities to defend itself against developing threats. Our systems provide Israel with the freedom to maneuver strategically.”

IDF Chief of Staff Lt.-Gen. Aviv Kohavi said the test on Tuesday morning “is another element in our ability to respond to developing threats in the region, and is a part of the implementation of the IDF’s multi-year plan.”

“The IDF and Israel’s defense establishment see great importance in constantly upgrading and improving our air defense capabilities,” he said.

THE ARROW-3, one of the joint programs between Israel and the United States, was co-managed by the US Missile Defense Agency and IMDO, a division of the Israeli Defense Ministry.

The primary contractor for the integration and development of the Arrow Weapon System is IAI’s MALAM Division, which is responsible for the radar functions, along with Elbit Systems’ Elisra Division, which developed the firing management systems, and IAI’s TAMAM Division together with IMI and Rafael Advanced Defense Systems, which jointly developed the interceptor. America’s Boeing is also a partner in the system.

There have been several tests of the system, the last being in Alaska in 2019, when a series of experiments over the course of 10 days saw three successful interceptions. Taking place at Pacific Spaceport Complex-Alaska (PSCA) in Kodiak, Alaska, it was the first such test outside of Israeli territory.

IMDO director Moshe Patel told journalists that since the series of tests carried out in Alaska, there has been a “significant” expansion of the Arrow’s capabilities in all of its systems.

“We have made a breakthrough in every part of the system – in the detection arrays, in the launches, even in the interceptors themselves – so that they match the threats that are expected in the region,” Patel said, adding that the breakthroughs “can be used by the air force immediately.”

The Arrow 3 is a highly maneuverable system designed to provide air defense by intercepting ballistic missiles when they are still outside the Earth’s atmosphere. It is considered one of the world’s best interceptors due to its breakthrough technological capabilities. The Arrow 3 is the only interceptor that doesn’t carry a warhead but intercepts an incoming missile by crashing into it.

The latest generation of the system is believed to have better intercepting capabilities at a much higher altitude and much further away from Israeli soil.

The Arrow 3 forms the uppermost layer of Israel’s multi-layered defense system along with the Arrow 2, David’s Sling and Iron Dome. Together, they provide Israel with a protective umbrella able to counter threats posed by both short- and mid-range missiles used by terrorist groups in Gaza as well as the threat posed by more sophisticated long-range Iranian ballistic missiles.

With tensions increasing over Iran’s nuclear program and regional hostility, both Jerusalem and Tehran have been threatening each other. Senior officers have stated that the military is capable of carrying out a strike. In November, Iran fired 16 ballistic missiles toward a target simulating Israel’s nuclear facility in Dimona at the end of five days of military drills.

The IDF knows that should a strike be ordered, the response would be a multi-front war with Hamas, Hezbollah and other Iranian proxies firing thousands of rockets – including precision missiles – toward Israel and its strategic assets.