Incident is the second in the past six months 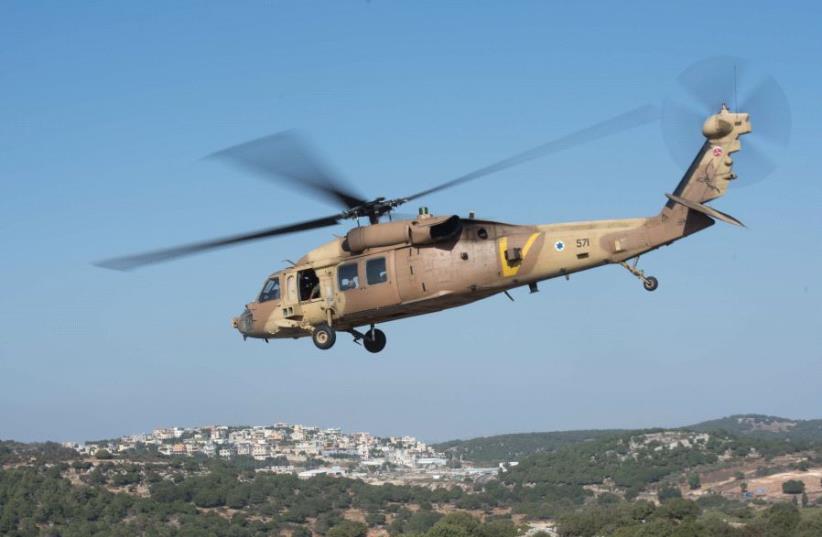 Blackhawk helicopters take part in IDF Air Force drill, July 2017
(photo credit: IDF SPOKESPERSON'S UNIT)
Advertisement
A Sikorsky UH-60 Black Hawk helicopter carrying IDF Chief of Staff Lt.-Gen. Aviv Kochavi, was forced to make an emergency landing on Sunday following an engine malfunction, the military said.
The twin-engine helicopter, whose Israel Air Force designated Hebrew name is “Yanshuf” (Owl) landed safely at a base in the center of the country and there were no casualties or damage, the military said, adding that the incident would be investigated. Kochavi continued to his destination by car.
The incident is the second in less than six months that a Yanshuf carrying Kochavi has been forced to make an emergency landing because of engine trouble. In July, he was heading to Tel Nof air base but the helicopter had to set down shortly after take-off from the Knesset.
The incident occurred as the pilots switched off a faulty engine, but the good one also cut out and the helicopter began to plummet before the pilots managed to reactivate it some 30 meters above the ground.
According to a statement released by the military at the time, one of the engines had a “technical malfunction” and while the IDF said that “at no time was there a threat to the lives of the passengers,” a report by Channel 12 said that the incident nearly ended in “disaster” due to the incorrect handling of the situation by the flight crew as they shut down the working engine along with the one that was faulty.
The military said that in August, Israel Air Force Commander, Maj.-Gen. Amikam Norkin had ordered the Yanshuf fleet to be grounded following a number of engine problems and that they would only be used for operational activities, until a detailed investigation was concluded.
The Blackhawk was originally designed in the 1970s as a tactical transport aircraft for United States forces and can carry a dozen troops with equipment or over one ton of supplies. The medium-utility helicopter, has been in service in the IAF since 1994 and was first used in combat during Operation Grapes of Wrath against Hezbollah in southern Lebanon in 1996.