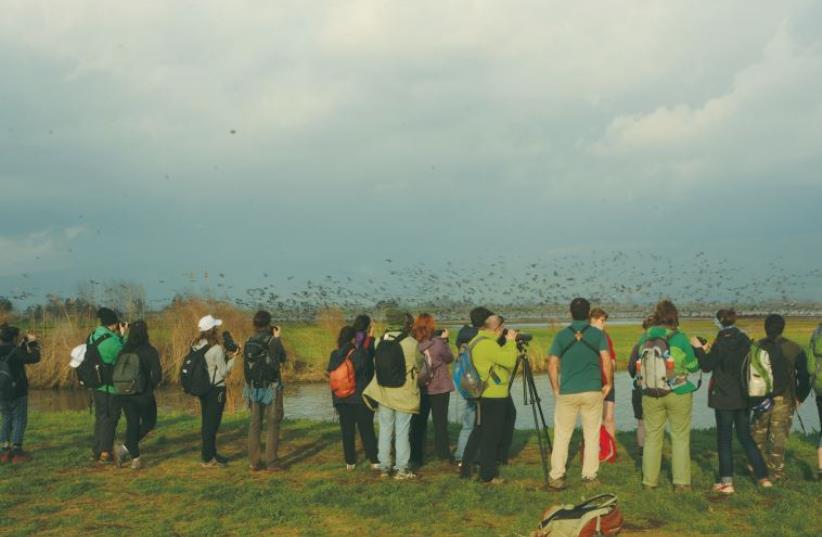 MEMBERS OF FIVE European environmental groups visit the Hula Valley last week
(photo credit: URI ELIYAHU/SPNI)
Advertisement
Hiking along the Israel Trail this past week, the pastoral scene was interspersed with the sounds of Italian, German, English and more. Since Monday, representatives of five European environmental groups have been traveling the Israel Trail and touring the country as guests of the Society for the Protection of Nature in Israel, in honor of the trail’s 20th anniversary.During six days, the group traveled from North to South, hiking the trail part of the way as well as engaging in fieldwork and learning about Israel’s ecology. They began at Mount Hermon, continuing on to birdwatching in the Hula Valley, with stops on Mount Meron, in Jerusalem (including a tour of Yad Vashem), and sites around the Negev, and ending at the Dead Sea before heading to the airport.Along the way, the group met with members of the Druse, Circassian and Beduin communities, which is also part of an effort to get a diverse group of people involved in caring for the environment, according to the group’s tour and trek guide, Eyal Gary.The trip was designed to “advance environmental issues, change minds regarding the environment and preserve the unique ecology of Israel.”For Christiana Melinioti, project manager at the AKTI Project and Research Center in Nicosia, Cyprus, the trip was eye-opening.Before this trip, she would have never thought to travel to Israel, even though she lived so close. She said that it just didn’t seem like a travel destination since she is not a very religious person. And some of her colleagues did not come on the trip out of fear that it would be dangerous.Speaking to The Jerusalem Post, she gushed with amazement over discovering that Israel is not a war zone but instead a nation of green, with plenty of ecological diversity packed into a small space.“Anyone who loves beauty and history should check it out,” Melinioti said. “I will talk about this and possibly even write about it.”She said that she is going to start reading up on Israel as soon as she gets home. “It’s a shame that more people do not travel here.”