Sewage leaks into Kishon River near Haifa after power outage

An effort is now underway to upgrade the existing system in cooperation with the Environmental Protection Ministry. 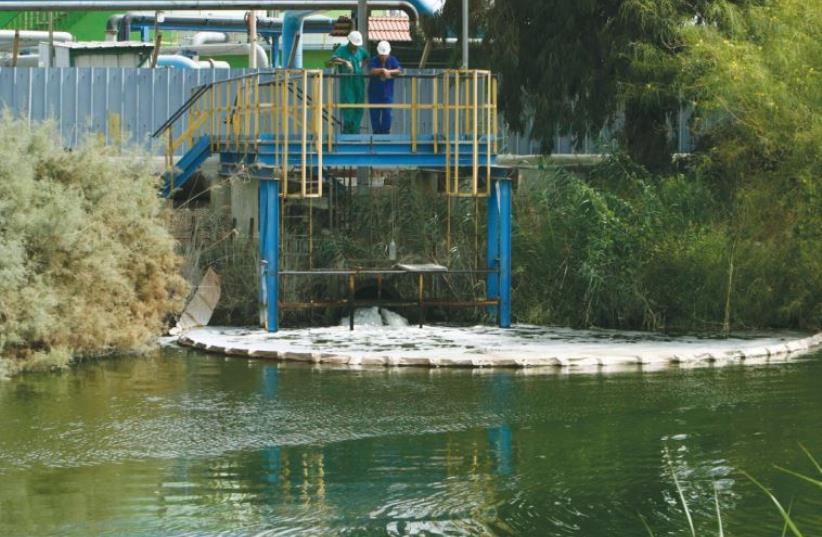 FACTORY WORKERS watch sewage flow into the Kishon River in 2007
(photo credit: REUTERS)
Advertisement
The Environmental Protection Ministry on Sunday opened a criminal probe after a power outage caused sewage to leak into the Kishon River over the weekend in Kiryat Tivon, near Haifa.Authorities were able to stop the leak and repair the infrastructure at the Mayanot Haemek Water Corporation waste-treatment plant on Saturday, and said sewage will remain present in the water for days to come.An initial investigation showed the leak was caused when a water-pumping station became overworked, causing a power outage.As a result of this outage, wastewater was able to leak out, but there was no warning system in place to alert authorities of the malfunction.An effort is now underway to upgrade the existing system in cooperation with the Environmental Protection Ministry.Yonatan Shavit, head of environment department at the Kishon River Authority, told The Jerusalem Post on Sunday the leak does not pose any danger to humans unless they swim in the river, but that animals in the area could be seriously hurt since this part of the river serves as an ecological corridor for wildlife.Though claiming the river is safe, overall, Shavit warned against entering the contaminated waters for now since pathogens could enter the body while swimming, causing diarrhea or even death for those who are weak.Incidents like this are all too common, according to Shavit.“Fortunately, we reacted quickly this time,” he said. “But this kind of leak happens each and every month.”Shavit said a sewage leak of this nature in the rainy winter months can be washed away in two to three days, but that in the dry summer months the same result takes almost a week.A big leak that occurred over the summer killed hundreds of fish.Meanwhile, Shavit recommended that pumping stations install back-up generators for when the power goes out, as well as to make sure that the companies responsible pay fines and are brought to court.“Hopefully, in the future, people will be able to enter the Kishon River.”After decades of sewage contamination, beginning in the 1930s from petrochemical plants, efforts have been made in recent years to clean up the notorious Kishon.In August 2015, an effort began to pump 1.1 million cubic meters of standard drinking water into the Kishon annually to increase its flow and improve water quality.Sharon Udasin contributed to this report.