Israeli entrepreneur filling up the space with shipping app 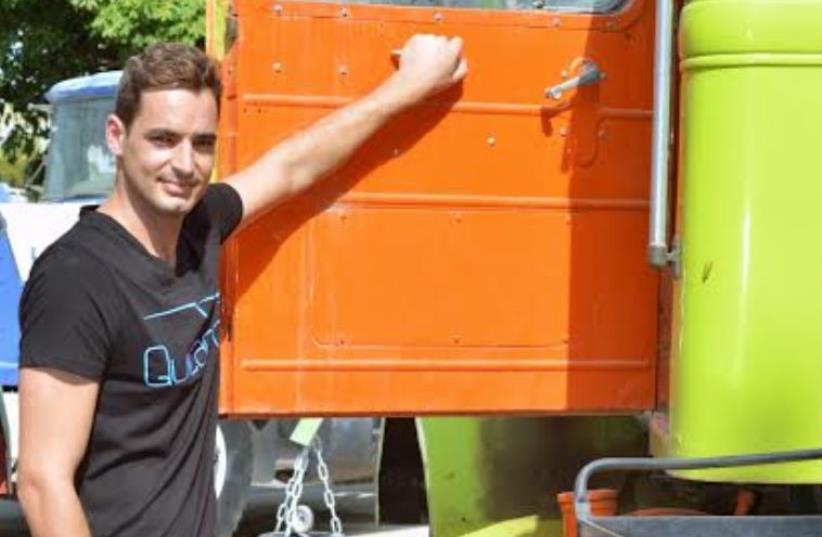 Avishai Trabelsi and a truck.
(photo credit: COURTESY OF QUICARGO)
Advertisement
After years working in his family’s transportation firm, young entrepreneur Avishai Trabelsi grew increasingly frustrated as he saw trucks returning from their destinations empty or near-empty.“I saw that half the time our trucks were returning back empty or going to their destinations not full in the cargo space,” Trabelsi told The Jerusalem Post on Wednesday. “I tried to look for different technologies or systems that can make it better. I didn’t find anything that could exactly solve my specific problem, to make it easier and practical.”Determined to solve an issue that leads to immense wastes of fuel and manpower, while generating excess air pollution and road congestion, Trabelsi established Quicargo Technologies Ltd. – the Moshav Tekuma-based champions of a forthcoming app that aims to connect shippers with truck drivers on an anticipated route.The app, accessible online or via smartphones, enables businesses to identify nearby truck drivers who have available cargo space and are headed to a specific destination. Most of the participating trucking companies will charge less than normal shipping costs, according to Quicargo, as otherwise the space would go unused.Trabelsi, now the CEO and co-founder of the new firm, worked as a dispatcher for 10 years at his family’s transportation firm, RT-Fresh, eventually rising to CEO. He resigned from that position in January and created Quicargo a month later.Using the Quicargo app, shippers will be able to post a request, and carriers can then bid on the shipments in real-time, the company explained. The shippers then will have the opportunity to choose the most relevant bid – based on the carrier’s price, location and rating.Citing data from the World Economic Forum, information from Quicargo said that the total global cost burden of unused loading space in European trucks alone amounts to roughly €160 billion.After the recent completion of a successful pilot in Israel, Trabelsi and his team said they will be seeking strategic partners, and will be presenting their technology at the Warsaw Wolves Summit next week and the Dublin Web Summit in November.In the pilot program, which ran for a month and concluded in July, Trabelsi and his team targeted the commodity enterprises sector, involving 80 shippers and 10 carrier companies – about 100 trucks in all.“Most of the pilot was to see if the product was working well and how the client felt about it in the interface,” he said.While Trabelsi noticed two problems at the beginning – trust issues among shippers and truckers, and resistance to adopt the technology – he said the pilot proved a success.“Once they tried the app platform, they saw it was very easy,” he said.Although the pilot was carried out in Israel, and Quicargo is planning a full-scale Israel launch in January, the company is primarily seeking expansion into the European market, Trabelsi explained. He and his team are at the moment looking at possible partners in five countries, he said.“We love Israel and we are from here,” he continued. “This is our beta site and we would be happy to run our product here as well. We are looking in the European market at the moment.”Although at this point users must manually identify when they have a need for cargo, Quicargo is developing automated systems to handle the process. In addition, the firm hopes to tailor the app to fit the needs of various types of shipping companies, such as those that require refrigeration, Trabelsi said.One technology Quicargo is working is a system that integrates with a fleet management’s software, capable of sensing empty space in a truck and updated the shipping firm’s larger in-house computer system, he explained. A second technology the company is working on is a detector that can be installed in individual trucks, without involving an entire fleet, to measure how much space remains in that vehicle.“The vision is to take the empty spaces in the world and try to find them in an automatic way using different technologies and sources,” he said.