"We need your help, and know we can count on you to be there for us," Kahlon told leaders of Israel Bonds in Washington

By JAMES S. GALFUND
AUGUST 1, 2017 19:13
Israel Bonds President & CEO Israel Maimon (left) greets Finance Minister Moshe Kahlon
(photo credit: FREED PHOTOGRAPHY)
Advertisement
Finance Minister Moshe Kahlon, in Washington for talks with Treasury Secretary Steven T. Mnuchin and other officials, scheduled time to meet leaders of the Washington Israel Bonds campaign.
At a dinner in his honor held July 23 at a private home, the finance minister addressed several issues, beginning with Israel’s economy, calling it “very strong.”The finance minister cited low unemployment, a record low debt-to-GDP ratio of 62.1 percent and additional measures such as opening the market to increased imports and cutting corporate taxes.He also shared an update on his initiative to provide qualified first-time buyers with subsidized housing through a lottery system. Kahlon discussed three security challenges:   Syria; Iranian support for terror, which he termed “unprecedented’; and cyber warfare.  “It is,” he said, “a challenge to live in our area.”He nonetheless assured his audience “Israel is strong and resilient,” adding, “We need your help, and know we can count on you to be there for us.  Your help,” he emphasized, “is fundamental to us.” 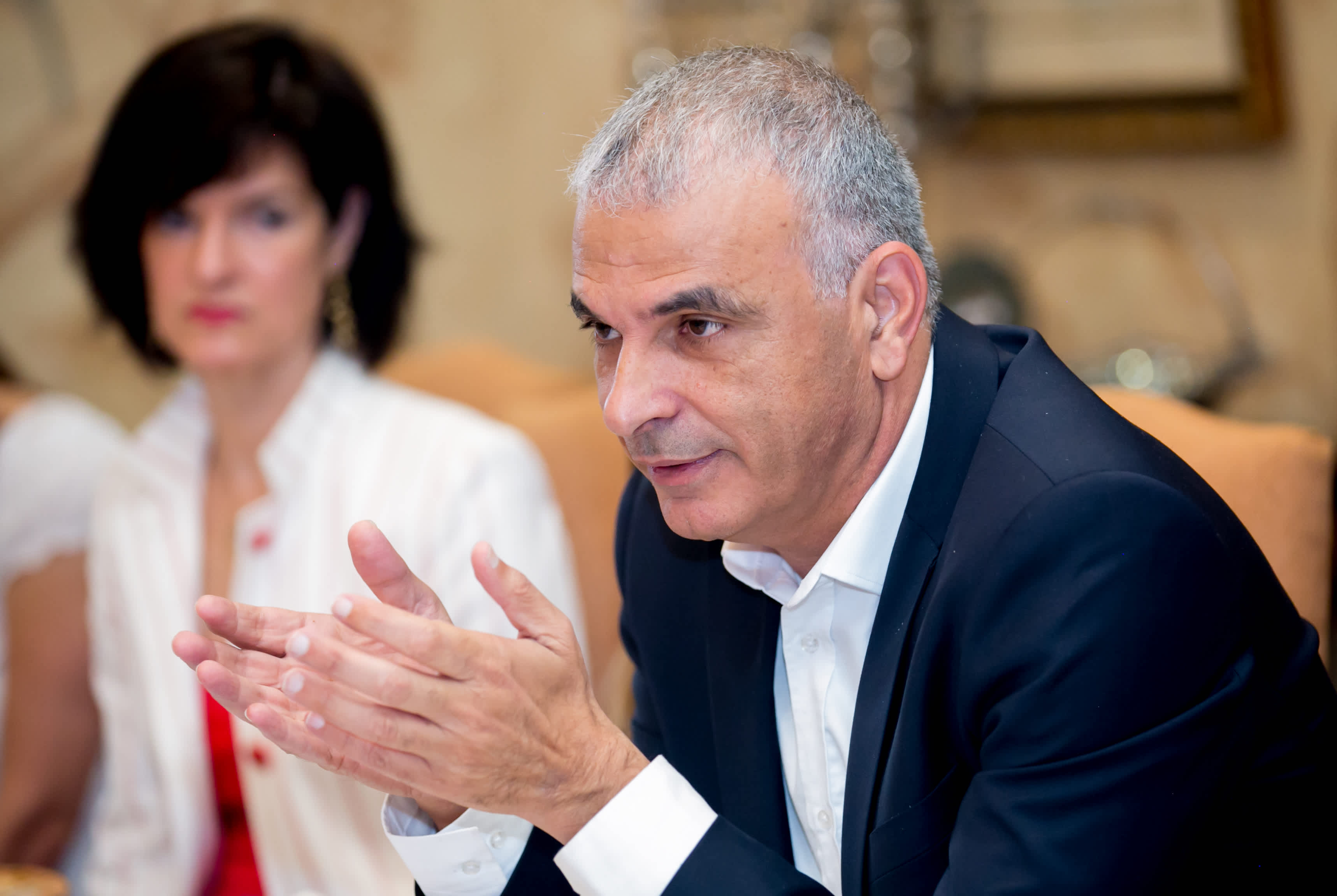 Finance Minister Moshe Kahlon tells Bonds leadership "We know we can count on you." (Credit: Freed Photography)Kahlon subsequently tweeted about the evening, saying, “Yesterday I met with leaders of Israel Bonds in Washington. I thanked them for their incredible and historic contribution to the State of Israel.” Israel Bonds has indeed made “an incredible and historic contribution to the State of Israel.” The finance minister put it into context earlier this year when he wrote, “Since its founding, Israel Bonds has been a cornerstone of Israel’s economy.  Crossing the $40 billion mark exemplifies the organization’s dedication to Israel, and the way in which its message of economic support has resonated on a global scale. On behalf of the government and people of Israel, I wish to thank Israel Bonds and its worldwide client base for helping to build every sector of our economy.”
Witnessing Israel’s rapid development is an extraordinary experience for Israel Bonds supporters.  National Women’s Division Chair Shira Lewis says, “It seems like the world today revolves around Israeli technology and the Israeli concept of making the world a better place. One is hard pressed to go through daily life without being affected by Israel in some way, large or small."
Board member Dr. Andy Hutter adds, “I have had the privilege of co-chairing five medical delegations on behalf of Israel Bonds. Seeing how Israeli technology is saving lives is an unforgettable memory for every participant.”
I recently had my own opportunity to visit Israel for a look at three areas in which the country has exceled – water solutions, sustainability and transportation.
WATER
The National Water Carrier, a frequent stop for Israel Bonds delegations, is arguably Israel’s most iconic undertaking. Begun in the late 1950s, it stretches from the Sea of Galilee to the Negev, and was instrumental in the realization of Ben-Gurion’s determination to “make the desert bloom.”But there was a problem.  As Israel’s population grew, the amount of water needed for drinking rose exponentially, and scarce water resources had to be diverted from agriculture to meet the growing requirements of Israel’s citizens.That’s where Israel’s well-established reputation for innovation came into play.  With the Mediterranean Sea as the country’s western border, desalination became the obvious answer. Now, eighty-five percent of Israel‘s drinking water comes from the sea.
Now, Israel’s water supply is no longer dependent on nature. Even in the event of a major drought, Israel would still have sufficient resources to meet the needs of its population.
SUSTAINABILITY
Israel is at the forefront of groundbreaking technology and innovative environmental solutions.  An outstanding example of the way in which Israel combines the two is the Shafdan wastewater treatment plant, located five miles south of Tel Aviv.
Over the course of a year, Shafdan treats 35.6 billion U.S. fluid gallons of wastewater that supply fully 70 percent of the irrigation needs of the Negev and 10 percent of the water needs of the entire country.   Another example of Israel’s cutting-edge approach to green solutions is Ariel Sharon Park, once a massive landfill that is now a model of sustainability. At one time, the huge landfill contained so much trash that it rose to a height of nearly 200 feet and was dubbed ‘Trash Mountain.’ 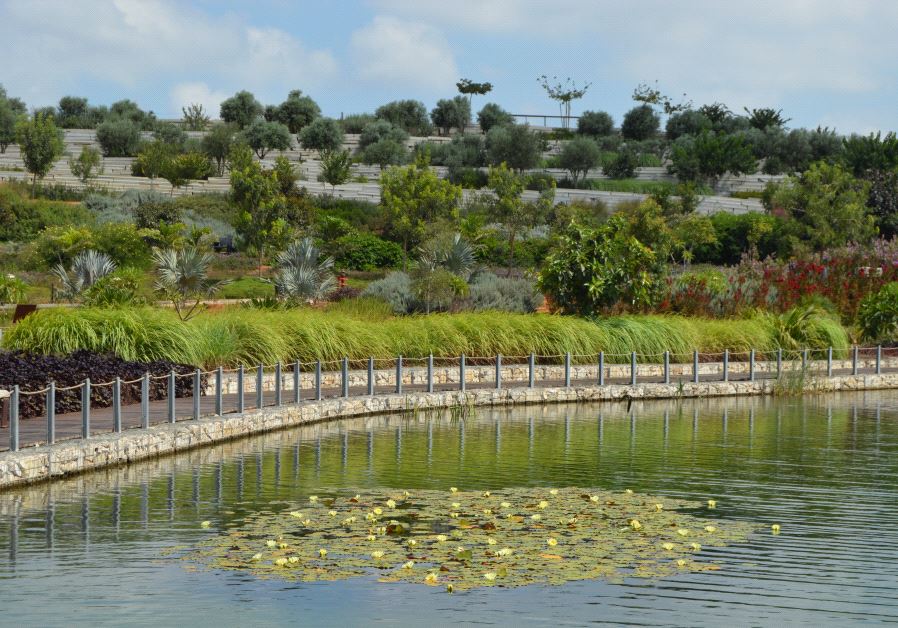 Ariel Sharon Park, built on the site of a former landfill once dubbed ‘Trash Mountain,' is an outstanding example of Israel’s cutting-edge approach to green solutions (Credit: JAMES S. GALFUND)Today, thousands of Israelis flock to Ariel Sharon Park to enjoy its hiking trails, bike paths, artificial lakes and groves of trees. International representatives from countries including China, Sri Lanka and Mexico have also come to the park looking to benefit from yet another example of Israeli ingenuity.
TRANSPORTATION
During an Israel Bonds delegation to Israel, New Leadership Council member Jason Langsner listened intently to Jerusalem Mayor Nir Barkat. “I vividly remember Mayor Barkat discussing planning goals associated with construction of the new high speed train connecting Tel Aviv and Jerusalem. He predicted that as a direct result of the project, Jerusalem would construct 13 new towers, adding over 10 million square feet of office space in the coming years.” 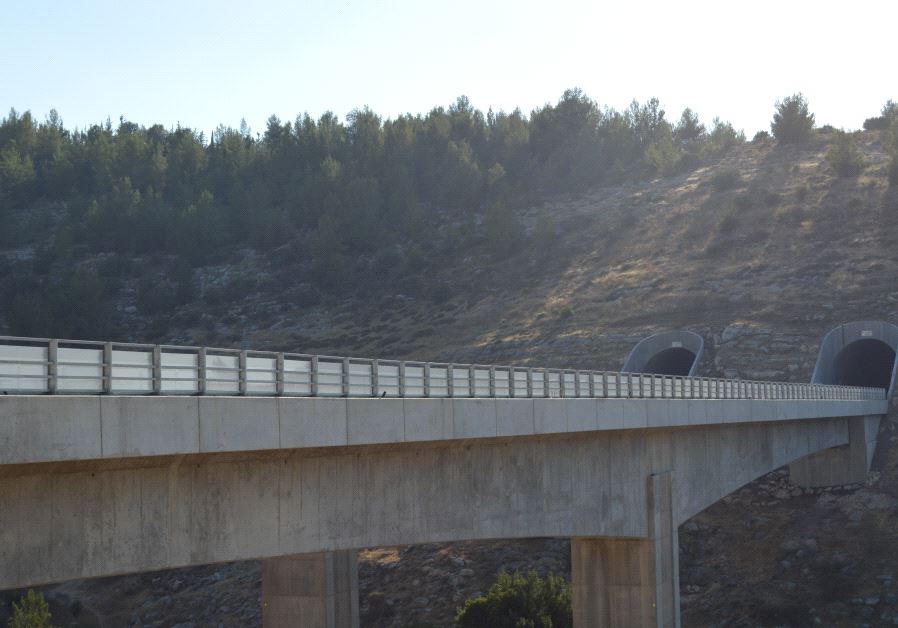 Israel's high-speed trains will race 100 mph along a network of eight bridges and six tunnels that constitute one of the largest infrastructure projects in Israel’s history (Credit: JAMES S. GALFUND)The high-speed rail is indeed a game-changer. Officially launched in 2005, the Capital Express is expected to become fully operational next year.

When that happens, passengers will travel from Tel Aviv to Jerusalem on trains reaching speeds of 100 mph. The journey, currently a tedious 1 ½ hours each way, will be whittled down to just 28 minutes. The high-speed electric trains will race along a complex network of bridges and tunnels being hailed as one of the largest infrastructure projects in Israel’s history.
“AN EXTRAORDINARY SUCCESS STORY”

Seeing Israel’s amazing advances in so many fields always inspires the nation’s supporters.  Israel Bonds Chairman of the Board Richard Hirsch sums it up: “Every time I’ve been to Israel, I’ve never failed to be moved by the scope of development.  The fruition of Ben-Gurion’s vision of a worldwide partnership with the Diaspora through Israel Bonds can be seen throughout the country. Together, every Israel bond investor has played an important part in this extraordinary success story.”
The feeling is reciprocal.  As Finance Minister Kahlon put it, “For us, you are our friends.”
The writer is national director of marketing & communications for Development Corporation for Israel/Israel Bonds (“DCI”), a broker-dealer that sells Israel bonds. The content in this article was prepared by DCI and the Jerusalem Post as part of an advertising campaign for DCI. www.israelbonds.com