There are still three countries in the world that have not eradicated polio and large numbers of the population are not vaccinated against it. 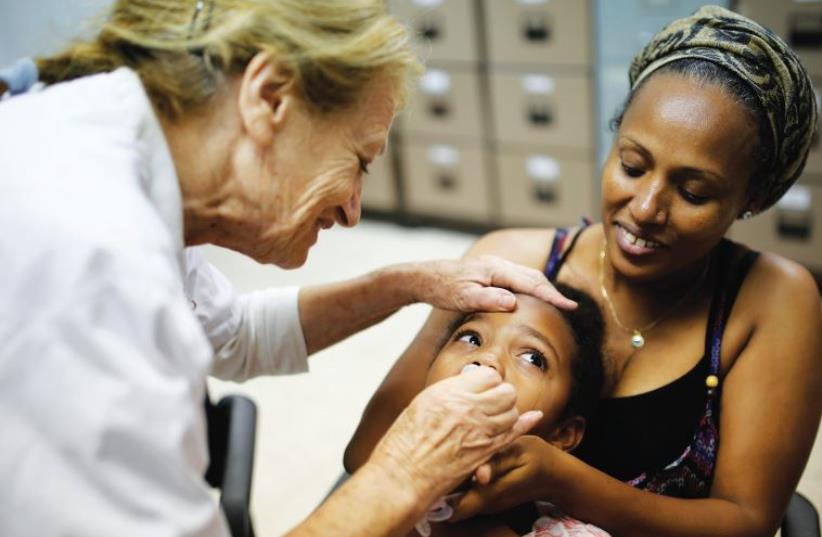 AN ISRAELI CHILD receives the polio vaccine in 2013
(photo credit: REUTERS)
Advertisement
Although polio has been virtually eradicated around the world, Ben-Gurion University of the Negev researchers and their colleagues have developed a new model to detect and assess outbreaks and help eliminate it completely.The findings of the study headed by Prof. Dr. Yakir Berchenko, a member of BGU’s industrial engineering and management department, have just been published in Science Translational Medicine.The model could have shortened and simplified the Health Ministry’s dealings with the wild polio virus outbreak that hit Israel some four years ago but did not cause any people to take sick.One of the obstacles to wiping out polio completely is the reintroduction of a wild polio virus from an endemic country to a previously polio-free country.In 2013, Israel experienced an outbreak of wild polio that was detected in the sewage through a process known as environmental surveillance (ES), which involves regular checks of sewage or wastewater for signs of the virus.Even if a country had eradicated polio years earlier, as in Israel, wild polio virus can sometimes be carried over from a neighboring country. There are still three countries worldwide – Afghanistan, Pakistan and Nigeria – where polio has not been eradicated, and high percentages of the population are not yet vaccinated against it.Health officials could wait for a case of paralysis to be reported or utilize ES. Until now, however, its sensitivity for assessing the outbreak as a whole has been unknown, so ES is not trusted and not applied globally.Berchenko and his colleagues – from the Gertner Institute and including Health Ministry associate director-general Prof. Itamar Grotto who led the battle against the wild virus in 2013 – developed a model that establishes the sensitivity of ES and even how it is, in fact, much greater than the alternative. They wrote that by demonstrating that ES is much more sensitive, outbreaks can be detected earlier; the extent of the outbreak determined more quickly and accurately; and the termination of the outbreak declared more definitively.While the data are derived from the Israeli case, the model is applicable all over the world, they said.In 2013, the ministry spent several million shekels on as many as a million doses of the live attenuated polio vaccine in drop form for vaccinating children mostly in the South where the wild virus was found in the sewage plus more on nurses and publicity.