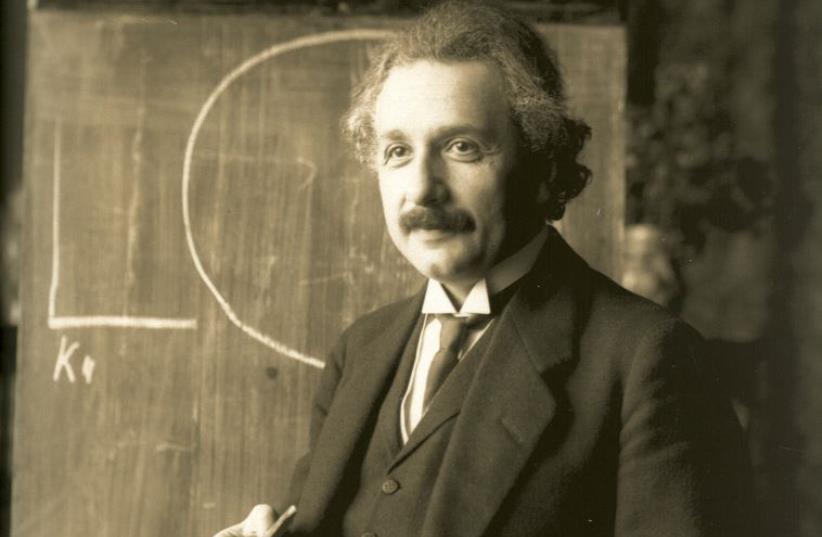 Albert Einstein Archives, Hebrew University of Jerusalem
(photo credit: ALBERT EINSTEIN ARCHIVES)
Advertisement
If Albert Einstein were alive and able to sit in the Hebrew University of Jerusalem’s Einstein Archives on Thursday, he would have taken “great satisfaction” to learn that his century-old major theory on the existence of gravitational waves has been objectively proven.So said Hebrew University Prof. Barak Kol, a Racah Institute of Physics expert on theoretical gravitation and a member of the high-energy physics group. His press conference briefing corresponded with the official announcement of the California Institute of Technology, the Massachusetts Institute of Technology and the Max Planck Institute in Germany.“It’s a special day, a holiday for us. Einstein, who was a founder of the Hebrew University and willed all his intellectual property to us, would have been curious what more will be discovered regarding his one-man theory and be happy to see scientists in Jerusalem and elsewhere continuing his journey,” Kol told The Jerusalem Post, adding that the discovery is the top scientific news of the decade and one of the most important in the last 50 years.The sophisticated equipment at two locations in the US – Louisiana and Washington state – and one in Europe, whose evidence of faint gravitational waves was presented at the National Press Club in Washington, DC, was built 15 years ago and upgraded in 2012, making it much more sensitive and able to detect gravitational waves emitted by a pair of giant black holes spiraling around each other and located some 1.3 billion light years from Earth, Kol explained in Jerusalem.Dr. Roni Grosz, curator of the Einstein Archives – the largest of its kind in the world, with some 80,000 documents – held up to photographers two German-language documents: a plastic-laminated manuscript with hand-written equations relating to gravity from 1915, and a bound article with formulas that predicted the existence of gravitational waves, published the following year in the Journal of the Prussian Academy of Science.Theoretic physics professor Hanoch Gutfreund, the Hebrew University’s emeritus president and director of its Einstein Center, who is personally responsible for Einstein’s intellectual property, was at the Washington press conference rather than in Jerusalem.Einstein’s central discovery was the Theory of Special Relativity in 1905.“But he understood that it didn’t work well with gravity, so he went on a journey that lasted for 10 years to find a theory that suited the first theory.There were many twists, but his main thought was the warping of space-time,” Kol said. “He was thrilled when, in 1916, he ‘saw the light’ about outbursts of gravitational waves.”There are ocean waves, light waves and radio waves, visible light, infrared light, X-rays and gamma rays. But these encounter interference as they move across the universe. “Einstein formulated his Theory of Gravity in 1915 predicting that gravitational waves should exist in oscillating spacetime,” Kol noted.“If his theory were proven today, we would have had to change our basic understanding of gravitational waves.This work announced today means a Nobel Prize for Physics for sure” for some of those involved, Kol predicted.The Hebrew University physicist is part of a small group of researchers in gravitational ways that includes himself, HU Prof. Tsvi Piran and Prof. Amos Ori of the Technion-Israel Institute of Technology. But they are not alone.For five decades, hundreds of engineers and scientists have worked on this aspect of Einstein’s theory, closing a chapter of a journey that began 100 years ago, said Kol.The importance of the discovery is that it will open “a new window to the universe and orbiting binary stars with the masses of 29 and 36 suns that could not be detected before. In the more distant future, we will be able to obtain more information about the beginning of our universe, the Big Bang,” said Kol.“We cannot always predict all the repercussions. Imagine what was known about X-rays or radio waves when they were discovered. But there will be changes in the way we see the world. Don’t expect major technological applications soon, but who knows what will happen in the distant future?” Reuters quoted the scientists at the Washington press conference as stating: “Like light, gravity travels in waves; but instead of radiation, it is space itself that is rippling. Detecting the gravitational waves required measuring four-kilometer-long laser beams to a precision 10,000 times smaller than a proton... They are able to detect remarkably small vibrations from passing gravitational waves. After detecting the gravitational wave signal, the scientists said they converted it into audio waves and were able to listen to the sounds of the two black holes merging.”“We’re actually hearing them go thump in the night,” said MIT physicist Matthew Evans. “We’re getting a signal which arrives at Earth, and we can put it on a speaker, and we can hear these black holes go, ‘Whoop.’ There’s a very visceral connection to this observation.”“We are really witnessing the opening of a new tool for doing astronomy,” MIT astrophysicist Nergis Mavalvala said. “We have turned on a new sense. We have been able to see and now we will be able to hear as well.”