Enjoy Tu Bishvat fruit and nuts, but beware of choking danger to children, high calories to all

Pieces of hard dried fruit, walnuts, pecans and various snacks can get stuck in the windpipes of young children and cause them to choke. 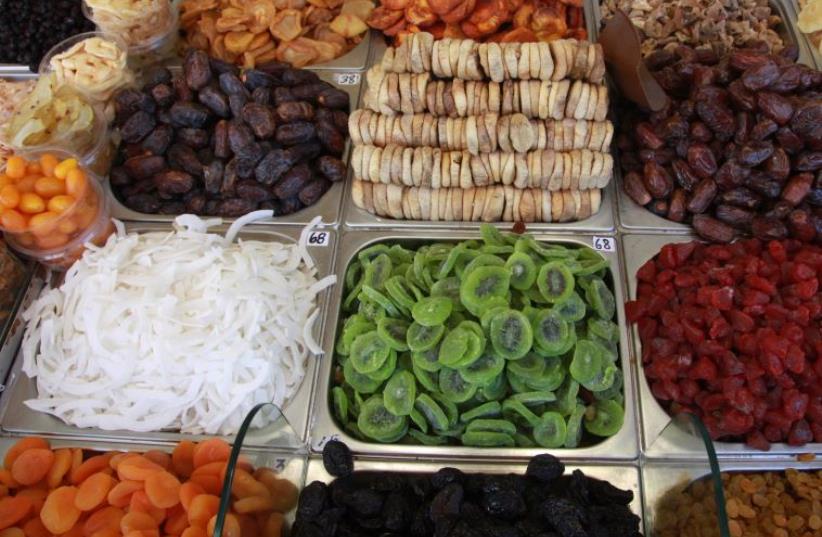 Tu Bishvat
(photo credit: MARC ISRAEL SELLEM/THE JERUSALEM POST)
Advertisement
When Tu Bishvat, the 15th day in the Hebrew month of Shvat, arrives (as it will on Shabbat), Israelis think the winter is nearing its end. But the New Year of Trees, celebrated by plantings and eating nuts and fruits, can pose dangers, especially to children.Pieces of hard dried fruit, walnuts, pecans and various snacks can get stuck in the windpipes of young children and cause them to choke. In addition, the heavy amounts of sugar in fruit can be a caloric bomb for any age.Prof. Aviv Goldbart, head of the Pediatrics B department at Schneider Children’s Medical Center in Petah Tikva and a lung expert, said children under the age of five are at the highest risk of choking on edible objects this season.Keep them out of their reach, he said. Even those aged five to eight should not be allowed to eat such goodies without adult supervision.If a foreign object or bit of food does get stuck in the trachea or esophagus, hold the child upside down and give four strong blows between his shoulder blades to help get it out.If that fails, he said, don’t waste time. Bring the child for immediate medical care or call for an ambulance.Liat Vered Chen, head of the southern region of Beterem at Soroka University Medical Center, added that choking is the leading cause of death in babies and toddlers, comprising 53% of all unintentional deaths in that age group.Between 2012 and 2016, 49 such children died from choking. Young children’s airways are narrower and smaller than those of adults, and the swallowing mechanism is not as well developed, she said.Various foods swell when mixed with saliva, making them more dangerous, especially if they are round and can cover the whole trachea opening. Fruits, whether dry or fresh, must be cut up into very small pieces or be cooked and mashed. When children eat, they should sit at a table and not run about. Seeds in grapes and other fruits should be removed before serving. Teach children to chew their food well.Clinical dietitians at Schneider recommend eating fresh fruits on Tu Bishvat rather than dried ones full of sugar. If you do eat dried fruits, wash them well in water and dry them to remove some of the sugar. One can put dried fruits into baked goods and salads rather than eat them as a snack and overdo the consumption of sweets.People with high levels of triglycerides or sugar should strictly limit the amount of such foods they eat on Tu Bishvat and throughout the year.
Sign up for the Health & Wellness newsletter >>