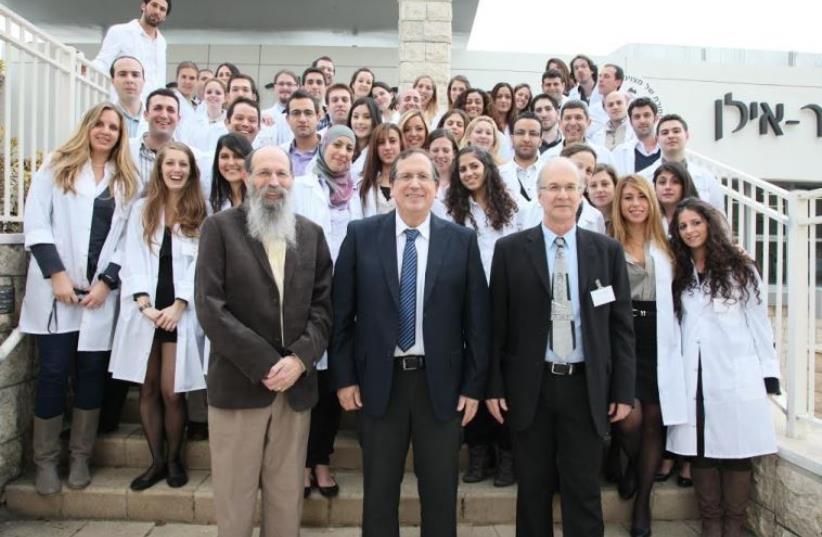 Galile’s medical facilities first graduating class
(photo credit: Courtesy)
Advertisement
Bar-Ilan University’s Faculty of Medicine in the Galilee in Safed graduated its first class on Wednesday evening.Forty-eight graduates – 25 women and 23 men, among them five Arabs – received their diplomas at a ceremony in Beit Yigal Allon at Kibbutz Ginossar on the Sea of Galilee in the presence of Prime Minister Benjamin Netanyahu, Health Minister Ya’acov Litzman, Galilee and Negev Development Minister Arye Deri and Education Minister Naftali Bennett.Next year, there will be 110 medical graduates. Some participate in special programs for Israelis who studied pre-clinical medicine for three years abroad and came home to do their clinical work year, and others are bachelor’s degree holders who decided to study medicine.“It is a national, social, Zionist and historic achievement,” said faculty dean Prof.Ran Tur-Kaspa, an internal medicine and liver specialist who has been involved in the medical school since its establishment was approved by the government in 2009.The veteran medical faculties argued that it would be a “disaster,” but the view of 11 members of the 12-strong Halevy Committee, chaired by Shaare Zedek Medical Center director-general Prof. Jonathan Halevy, prevailed.Halevy said in 2009 the government’s decision was “the fulfillment of a dream. There will be more competition among the medical schools, and some of the Israelis who were previously not accepted and went to study in Eastern Europe and elsewhere will come home to study – today, there are 1,000 of them studying medicine in Hungary alone.”Halevy added the first four faculties – in Jerusalem, Tel Aviv, Haifa and Beersheba – produce only a few hundred graduates a year due to Treasury limitations via the Council for Higher Education, as teaching medicine is a very expensive process. But producing doctors is vital, as many who emigrated in the 1970s from the former Soviet Union are now retiring, and the growing number of women physicians tend to work less than full time.Tur-Kaspa told The Jerusalem Post in an interview Wednesday morning that the faculty’s campus has 500 students, including 140 who are pursuing master’s of science and doctoral degrees while doing research in 18 labs. This includes researchers who left Israel for post-doctoral work and emigrated. “I think that today, the other medical faculty deans accept us warmly due to their realization that we are not only producing much-needed doctors but have also greatly upgraded medicine in the North,” said Tur-Kaspa. “Since the launching of our faculty, there have been significant beneficial changes. Many doctors applied to head departments and fill other management positions in Galilee hospitals.A good director brings with him teams of other doctors.”The new medical school is affiliated with Poriya Medical Center near Tiberias, Ziv Medical Center in Safed, Western Galilee Medical Center in Nahariya, Nazareth’s Scottish Hospital and its Italian Hospital, and the Mazra Mental Health Center. Medical students and residents also train in health fund clinics in the Galilee.There are also new hospital departments and facilities such as neurosurgery in Nahariya, radiotherapy in Ziv and heart surgery in Poriya; this means that residents of the North don’t have to travel long distances to undergo procedures.The students come from all over the country, with only a few raised in the Galilee.“We started a new program with the Jewish Agency and Bar-Ilan. This mahzor [cycle], first, most will not be in periphery, but we started a new program (Boharim Galil; Choosing Galilee) for students who want to remain in the area,” said the dean.“We put great importance on translational, biomedical research, “added Tur-Kaspa, “and prefer disease-oriented centers. We have also set up a center for population health, including prevention, public health, disease prevention and projects with community.In a project called RAFAEL, community leaders come to us with suggested projects; we give them mentors and funding. We have medical students visiting discharged patients at their homes to make sure that they are following instructions in taking care of their condition and are in touch with their doctors in the community.”