If a sperm were the size of a human being, it would swim several kilometers to reach its destination. Thus, sperm need to be guided by various cues. 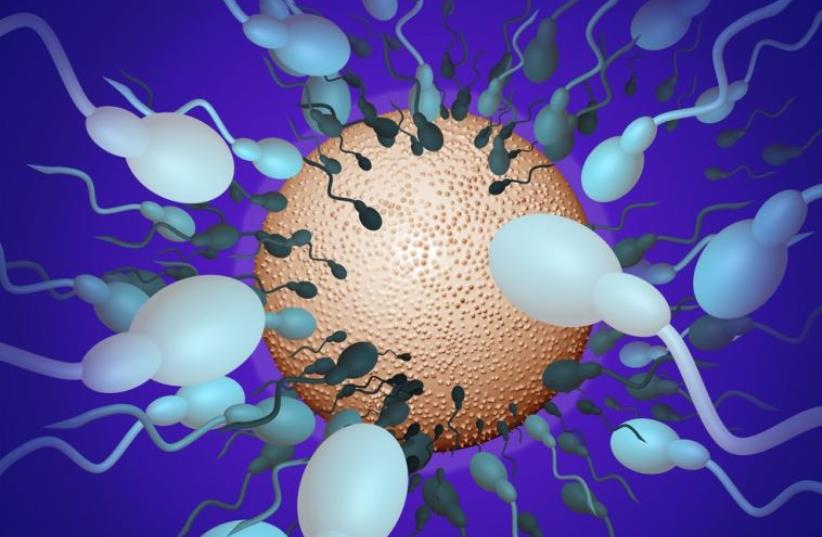 Sperm (illustrative)
(photo credit: INGIMAGE)
Advertisement
In their arduous journey to reach the egg, sperm “feel” the heat of the Fallopian tube and “taste” the chemical signals of the ova. But a new Weizmann Institute of Science study published in Scientific Reports shows that sperm actually make the use of sensors that belong to the visual system.If a sperm, about 46 microns (thousandths of a millimeter) long, were the size of a human being, it would swim several kilometers to reach its destination. Thus, sperm need to be guided by various cues.In earlier studies, Weizmann Institute’s Prof. Michael Eisenbach and his team discovered two of these guidance mechanisms – heat-sensing and chemical cues. The heat attraction works across the longer range – the site of the fertilization is warmer than the spot at the entrance to the Fallopian tube where the sperm pause for maturation, and this temperature difference points them in the direction of the egg. When they get closer to the egg, they pick up its chemical signals.“As in all important processes in nature, the sperm rely on more than one mechanism in their navigation, so that if one breaks down, others can provide a back-up,” Eisenbach explained.The heat sensitivity of sperm is extremely high. From a distance equivalent to the length of one sperm cell, they can sense differences in temperature as minuscule as 0.0006 of a degree Celsius. This sensitivity enables them to be guided by a very gradual increase in temperature on the way to the fertilization site.In the new study, Eisenbach’s team – Dr. Serafín Pérez-Cerezales, Dr. Sergii Boryshpolets, Oshri Afanzar, Dr. Reinat Nevo and Vladimir Kiss of the biological chemistry department and Dr. Alexander Brandis of biological services department – set out to discover exactly how sperm sense the heat.The scientists examined a particular category of receptors that, based on their previous studies, were thought to be involved in conveying signals to the sperm. Within this category they zeroed in on a family of proteins called opsins.These are best known for their role in an entirely different sphere – the visual system. One major protein in this family, called rhodopsin, serves as a photoreceptor in the cells of the retina. But studies by other researchers working with fruit fly larvae had found this protein involved in responding to heat, hinting that this could also be the case in sperm.The Rehovot institute scientists found that several proteins in the opsin family of receptors were present on the surface of mouse and human sperm. Each opsin had its own distribution pattern on the sperm, and each apparently made a contribution, through its own set of signals, to heat sensing. When the researchers blocked the signals from these opsins, the sperm failed to swim from a cooler to a warmer chamber. These rather surprising findings may explain the enigmatic presence of opsins in organs that are not exposed to light, including the lungs and the liver.They suggest that the mammalian opsins may be performing heat-sensing functions in these parts of the body.RISE IN INFANT DEATHS FROM CRIB BUMPERSAlthough safety experts have long warned that it is dangerous to put crib bumpers in infant beds, they are routinely sold in Israel and abroad. Now a new study shows that the number of infant deaths and injuries attributed to crib bumpers has spiked significantly in recent years, prompting the researchers to call for a nationwide ban on the bedding accessory.The findings stem from an analysis by longtime experts on the topic – a professor emeritus of pediatrics at Washington University School of Medicine in St. Louis and two former researchers with the US Consumer Product Safety Commission (CPSC). The findings indicate that in the majority of incidents studied, crib bumpers were the sole cause of harm, rebutting beliefs that other items also in the cribs – such as blankets, pillows and stuffed animals – caused the deaths and injuries. The research shows that the 23 crib-bumper deaths reported to the CPSC over a seven- year span – from 2006 through 2012 – were three times higher than the average of eight deaths reported in each of the three previous seven-year time spans. And alarmingly, the researchers report, the lack of data gathered on cribbumper deaths and injuries over the decades suggests that the actual number of related deaths and injuries is likely much higher than what is now known.“Crib bumpers are killing kids,” said senior author pediatrics Prof. Bradley Thach, at the School of Medicine and the author of a landmark study published in 2007 that first documented crib-bumper deaths. “Bumpers are more dangerous than we originally thought. The infant deaths we studied could have been prevented if the cribs were empty.” The findings were just reported in The Journal of Pediatrics.There are no federal regulations regarding crib bumpers.In 2012, a voluntary industry standard was revised to improve crib-bumper safety by limiting the items’ thickness.And in 2013, the CPSC directed its staff to explore rule-making options, suggesting change, but it has not resulted in any federal action.According to the new research, a review of CPSC data showed that 48 infant deaths from 1985 to 2012 were specifically attributed to crib bumpers. An additional 146 infants were involved in crib-bumper incidents in which the babies nearly suffocated, choked or were strangled.The mean age of death was 4.6 months, with an age range of one to 22 months. The researchers determined that 32 of the 48 deaths they examined could have been prevented if crib bumpers had not been used in the cribs. Most of those infants died due to suffocation because their noses and mouths were covered by a bumper or were between a bumper and a crib mattress.Originally designed to protect infants from slipping through crib slats, entangling their limbs in the gaps or bumping their heads, many parents consider bumpers necessary safety precautions. However, since 1973, federal regulations have required that crib slats be narrow enough to prevent a baby’s head from going through.