Ze’ev Weiner, a member of the PHR-I ethics committee, said many southern residents not only suffered acutely, but sometimes their emotional problems became chronic and caused ongoing disability. 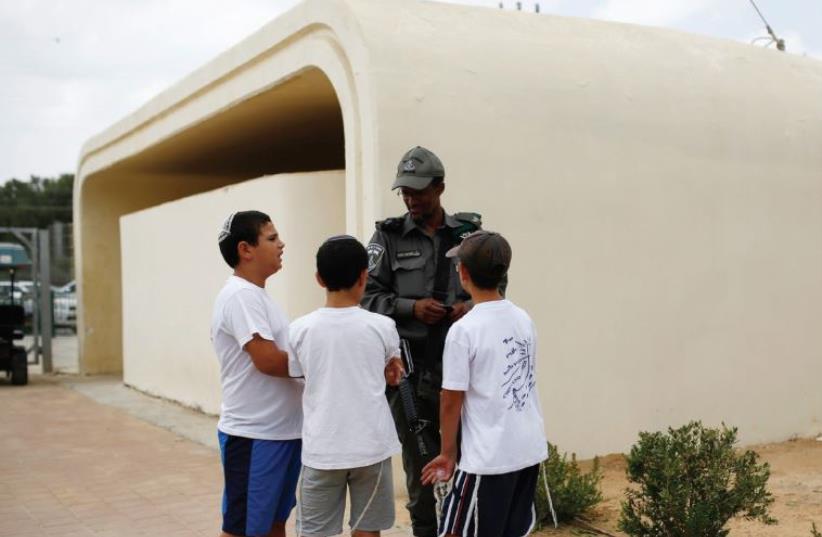 SCHOOLCHILDREN CHAT with a member of the Border Police near a bomb shelter at Kibbutz Sa’ad
(photo credit: REUTERS)
Advertisement
The Physicians for Human Rights-Israel (PHR-I) NGO issued a report for publication on Thursday criticizing the Health Ministry’s “inadequate mental health services” in the South during Operation Protective Edge last year.“The ministry failed by not carrying out its responsibility as a regulator of the mental health system that was privatized. Mental health services operated during the emergency without coordination, and private voluntary organizations hold sensitive information about patients without supervision,” the organization charges. “Treatment of patients with anxiety and emotional trauma is vital for residents of the South not only in war, but also in routine emergencies as the last few weeks have proven,” the report said.The report was based on interviews of therapists and patients during emergency periods in the South in two specific locations: the city of Sderot and the unrecognized Beduin town of Ujan. PHR-I also communicated in detail with the ministry.The report presented a “difficult picture of this system, which was privatized without a public debate. There was no consideration for southern residents who suffered damage.”The report added that one of the three major problems was the lack of regulation by the ministry, “which didn’t function according to its own guidelines and helped push public services to private organizations to do its work. In addition, there was no single body supervising treatment, and professional treatment knowhow was not passed among the various bodies responsible for providing it.” The four public health funds were supposed to provide emotional assistance in routine and emergency times, but “it wasn’t clear how their work was coordinated.” PHR-I complained that access to mental health services was “not egalitarian, and privatization damaged the residents’ right to get treatment, especially the weaker elements in society.”After receiving complaints about this during the war with Gaza, the organization decided to investigate the matter a year later, it said. The first part of its report, now published, will be followed by a second part dealing with how Israelis and Gazans wounded in the war are coping and undergoing rehabilitation on both sides of the border. Psychiatrist Dr.Ze’ev Weiner, a member of the PHR-I ethics committee, said many southern residents not only suffered acutely, but sometimes their emotional problems became chronic and caused ongoing disability.Asked to comment, the ministry said PHR-I was “hostile” to it by raising questions unfairly.“The ministry’s mental health service created unique services to help victims of emotional trauma in real time in all parts of the population. It established mental health centers in the south, trained professionals specifically to help cope with the war, and set up five walk-in centers that gave emotional first aid to residents who suffered from anxiety due to the downpour of missiles. These facilities were ‘closely supervised’ by the ministry,” it maintained.It also dismissed PHR-I’s charges regarding how the health funds functioned before responsibility for mental health was shifted from the ministry to the insurers. The ministry said it offered up to 24 types of treatments by professionals to all relevant Israelis who suffered from acute anxiety, in an arrangement with the National Insurance Institute, without the patients having to get recognition as suffering from mental disability.“Israel is a leader in the field of mental health assistance to all of its residents without prejudice according to religion, race or gender, and is one of the leaders in developing infrastructure, services, training and research in the field of emotional trauma,” the ministry said, rejecting all the organization’s charges.