The research described a distant forerunner of the present-day gundi – a small rodent with a comb-like bristles on the two middle toes of its hind feet, also known as “comb rat.” 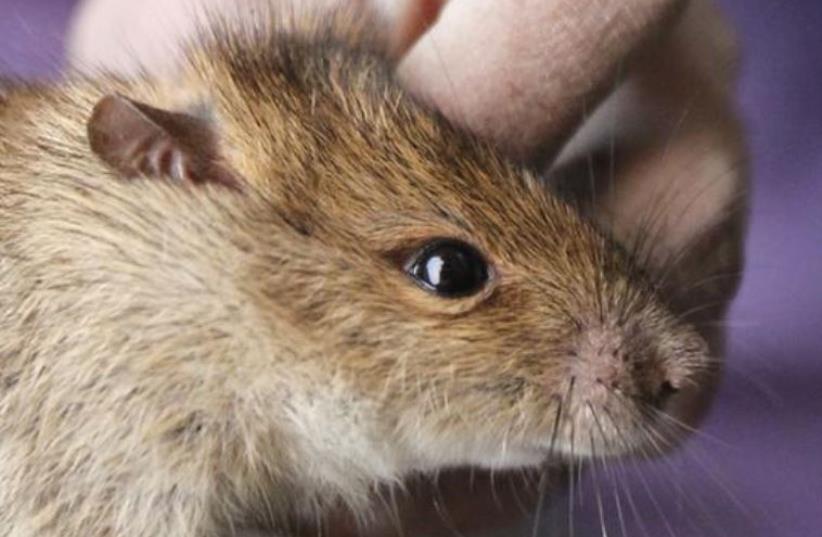 A rat
(photo credit: REUTERS)
Advertisement
A handful of tiny teeth found in the Negev led an international team of researchers to describe a new species of rodent which has been extinct for nearly 18 million years. The discovery of Sayimys negevensis sheds new light on the likely dispersal route of mammals and other species between Eurasia and Africa in the Early Miocene Epoch (23 million to 16 million years ago) and highlights Israel’s special paleogeographic position as the lynchpin of the Levantine corridor connecting Eurasia with North Africa.The research, recently published in the scientific journal PLoS One, described a distant forerunner of the present-day gundi – a small rodent with a comb-like bristles on the two middle toes of its hind feet, also known as “comb rat.”“It is a pivotal species that bridges the gap between an array of primitive Ctenodactylines and the most derived, Early Miocene and later, gundis,” researchers said in their article.Gundis are the last descendants of the family Ctenodactylidae, whose earliest ancestors appeared in Asia about 40 million years ago. They experienced their greatest diversification and widest distribution – from Far East to Africa – in Miocene times. Nowadays they live in groups on rocky outcrops in deserts and semi-deserts of East and North Africa.Researchers named the new species Sayimys negevensis after the Negev locality where it was found. Israel is the only place along the Eastern Mediterranean stretching from Anatolia to the Sinai where fossil sites of the Early Miocene period have been found.“The fossil sites of Israel are in a unique position to offer data on the early times of the large waves of faunal exchanges that took place around 19 million years ago between Eurasia and Africa,” said Dr. Raquel Lopez-Antoñanzas, a senior researcher at the University of Bristol, who led the research.During the Early Miocene period, Israel was still more firmly attached to Africa, and most of the mammals found there were of African origin. Sayimys negevensis is one of the few species discovered in Israel with Eurasian affinities.“The new Israeli species is closer in morphology to nearly coeval species found in Pakistan, therefore demonstrating that mammals were already using the Levantine corridor to travel between Eurasia and Africa in the Early Miocene period,” said research co-author Dr. Rivka Rabinovich from the Institute of Earth Sciences and the National Natural History Collections at the Hebrew University.OPTIMAL BRAIN ACTIVITY MAY LEAD TO HALLUCINATION STATE A recent Ben-Gurion University of the Negev and Weizmann Institute of Science study proposes that learning processes may drive networks of neurons in the brain to operate in the vicinity of a unique border state. On one hand, adapting to work in this state could enable peak performance in the ability to process incoming sensory information. On the other hand, it may also entail a risk of crossing over into an undesirable regime of fictitious neural representations, namely hallucinations. The study provides a theoretical basis for the idea that the brain operates near a critical state and is important for both characterizing healthy brain dynamics and understanding potential mechanisms for the development of brain disorders.The study was recently published in the open-access journal PLoS Computational Biology by BGU researcher Dr.Oren Shriki of the department of cognitive and brain sciences, in collaboration with Dovi Yellin from Weizmann’s neurobiology department.Neuronal networks in the brain include feedforward connections that convey information from one processing stage to another. However, neurons in each processing stage also talk to one another through recurrent connections.Recurrent networks display a rich repertoire of dynamic behaviors. In particular, they can maintain activity even without objective input, a state which can be interpreted as a hallucination. A major question is how the recurrent connections contribute to information representation in the brain and how they should evolve to optimize information representation.The researchers developed and studied a mathematical model of a neuronal network, which includes both feedforward connections from one layer of neurons to another, and recurrent connections among the neurons at the second layer, which represents the information.Similar to real neuronal networks in the brain, the network model is presented with external sensory outputs, and the recurrent connections among the neurons evolve through a learning process. The plasticity rules that govern the changes in the recurrent connections are designed to improve the information representation. The researchers found that the network tended to operate close to the border between normal information processing and a state of hallucinations.This can be explained through a simple analogy: Imagine that you have to speak through a microphone to a large audience. When you increase the volume of the amplifier, at some point you start to hear a sharp tone, which results from feedback between the microphone and the amplifier. To avoid this tone, which does not convey information, but still maintain a high volume, you slightly decrease the volume. Similarly, optimal sensitivity to external inputs is achieved when the recurrent dynamics in the neuronal network are strong enough to amplify the external inputs, but not so dominant as to generate hallucinations. These findings provide insights into what may cause several neurological and psychiatric disorders.In particular, these networks are very sensitive to small changes in the strength of the connections among the neurons. Such small changes can shift an otherwise healthy neuronal network into hallucinations and manifest as a neurological disorder. For example, it is known that during sensory deprivation, people start to develop hallucinations.The model proposes an interesting explanation for this phenomenon: when the inputs to the network are attenuated, the network approaches the critical point to further amplify the inputs, but may also cross over to the undesired regime of hallucinations.
Sign up for the Health & Wellness newsletter >>