Surgery – without the surgery 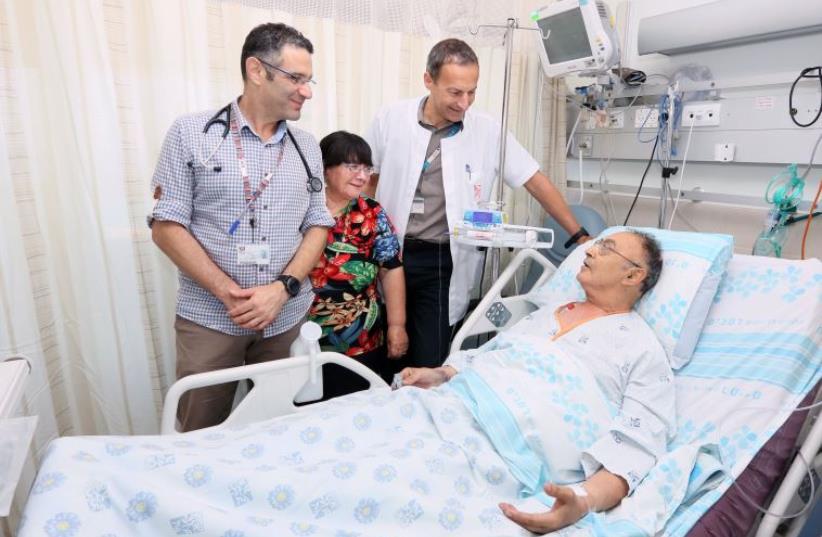 Shalom Cohen with wife with Prof. Bolotin (right) and Dr. Kerner.
(photo credit: PIOTR FLITR)
Advertisement
A 72-year-old man has undergone the country’s first-ever double heart-valve surgery using a catheter, Rambam Medical Center in Haifa announced on Monday. His defective human heart valves were replaced indirectly using a tiny tube that entered a vein in the grin instead of open-heart surgery. Until recently, such a procedure was only a dream for patients with cardiac insufficiency.Shalom Cohen, who lives in Kiryat Shmuel, underwent surgery a decade ago to replace two valves and thought his future would be trouble free. But recently. Cohen’s condition declined and he had difficulty breathing, carrying out simple tasks or moving about. His cardiologist found that the two biological heart valves that replaced his original ones had been eroded, causing the blood circulation problem.Last week he made Israeli medical history, when doctors in the catheterization room carried out the delicate and advanced procedure. Using the tiny tubes and video camera, Dr. Arthur Kerner of the interventional cardiology unit reached a defective tricuspid valve on the right side of the heart. Reaching the location is ordinarily very difficult even in open-heart surgery.Using the old defective valve as a framework, he inserted inside it a new but artificial valve. Before that, Associate Prof. Gil Bolotin  -- head of Rambam’s cardiothoracic surgery department -- had performed the replacement of mitral valve between the left auricle and ventricle. The two surgeons, by the way, had experience working together as Israel Air Force pilots.“This was an interesting challenge,” said Kerner. “The medical equipment we used had been developed originally to treat narrowing of the aortal valve. Inserting the previous biological valve made it possible to carrying out the necessary adjustments in catheterization techniques to treat the failed tricuspid valve. In these circumstances, we saw an opportunity to give our patient high-quality care, and we took advantage of it.”Until a few years ago, such a patient would have had to undergo a repeated open-heart operation that used a heart-lung machine. Such surgery could produce serious complications and require a long recovery period. But thanks to technological developments in the field, minimally invasive catheterization can be performed with a risk of fewer complications and shorter recovery times.Replacement of the tricuspid valve has been less frequent than replacement of mitral and aortal valves. Only a few thousand of such procedures have been done in the whole world. So replacing two defective valves between the auricles and ventricles is very, very rare, said Kerner.Soon after the surgery, the patient felt well, and he was discharged to his home a few days later. “The risk of this procedure is lower and the recovery period shorter than in open-heart surgery, and the results speak for themselves,” he continued. “In individuals such as Mr. Cohen, who need treatment at relatively older ages, this is significant.”Bolotin added that the new technique can have implications on the way patients are treated initially. “Statistically, ore and more people undergo biological-valve replacements at a relatively young age. The reason is the understanding that thanks to technological innovations, in the future it will be able to insert a new valve into the old one using catheterization. What we have done at Rambam proves that this thinking is correct also for other, more complicated cases. There is no double that patients benefit in quality of life.”