Melanoma results from the uncontrolled division of melanocytes in the skin. 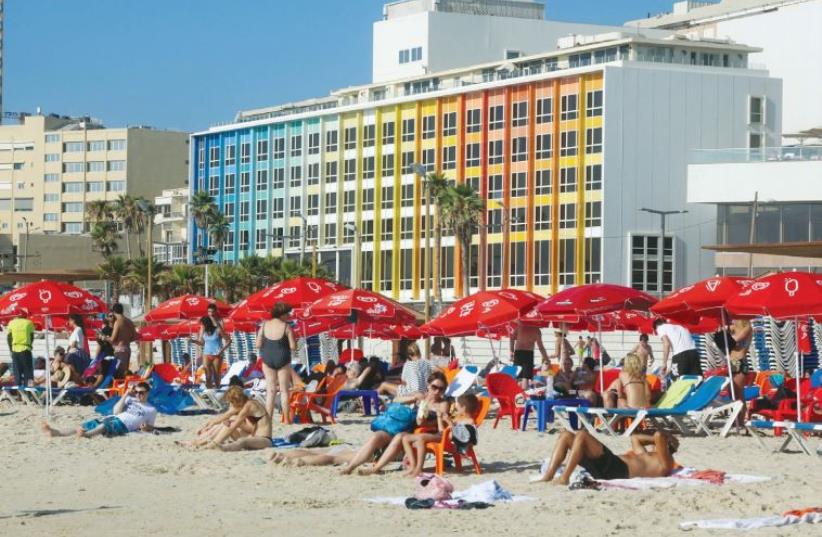 TEL AVIV BEACHFRONT
(photo credit: MARC ISRAEL SELLEM)
Advertisement
New research from Tel Aviv University offers hope for the effective drug treatment of melanoma, the most serious kind of skin cancer, according to a study published in the journal Molecular Cell.Melanoma results from the uncontrolled division of melanocytes in the skin.These cells, located in the upper layer of the skin, the epidermis, are responsible for the production of melanin, the pigment that absorbs short ultraviolet rays from the sun.“Melanoma spreads in two stages,” explained Dr. Carmit Levy of the university’s Sackler School of Medicine, who headed the team of researchers.“In the first stage, the cancerous cells multiply in the epidermis. If we diagnose the tumor in time, we can remove it in a simple procedure."“In the second stage, cancerous cells may penetrate the dermis – the lower layer of the skin – and then proceed to the blood vessels, which can cause metastases to various parts of the body,” she said.Levy had sought to determine what causes the cancerous cells in the epidermis to spread to the dermis.“In every classical scanning image of the development of melanoma of the type seen with any Google search, one sees something strange. The cancer cells first rise to the surface of the skin, and only later do they penetrate the lower layers.“Why does the cancer invest its energy in rising? Why not go straight to the dermis and the blood vessels?” she wondered.She discovered that the epidermis itself consists of different layers that are very different from each other.“I thought that the cells don’t just rise, but they also change the environment of the nearby cells and receive something – without which they can’t penetrate the blood vessels and metastasize.”To test her theory, she collected healthy skin tissue and separated them into all the existing layers. She then mixed them with cancer cells to test the gene expression of melanoma. The results backed up her theory: the meeting between the melanoma and the upper epidermal layer is what turns the simple cancer cells into aggressive ones.“One must understand that there are many genes that are not expressed in regular cells,” said Levy. “When cancer cells reach the upper layer of the epidermis, this is a new environment for them.There, they connect to keratinocytes, the predominant cell type in the epidermis that are responsible for the production of keratin, which is the key structural material making up the outer layer of human skin. The molecular connection leads to the activity of the Notch signal, which wakes up dormant cancer cells, changes their form and enables them to wander and penetrate the blood vessels,” she said. “This causes a genetic domino effect that leads to malignancy.”Levy’s discovery is not only a “breakthrough,” the university said in a statement “but also offers hope for clinical advances since the signal exists in many cells and there is a known drug called DAPT that suppresses its activation.”“We used it in a culture of melanoma cells and it worked: The link was blocked, the Notch signal was not activated and the cancer did not metastasize,” Levy explained.She suggested that since DAPT has already been approved by the US Food and Drug Administration that it possibly could be used in the future as a drug that prevents melanoma “and everyone will be able to rub it on the skin like sunscreen.”There also are implications for the diagnosis of melanoma.“One has to understand that this is a cancer that develops over many years. When a dermatologist orders a biopsy, he and the pathologist follow up the growth and, according to the depth of penetration of cancerous cells, decide if it is benign or malignant. If the growth is at the depth of a millimeter or two in the skin, the doctor will order radiation.”Levy’s research could lead to new clinical advances on which Wolfson and Sheba Medical Centers are already working “We are suggesting an additional and more exact technique: to sample the cells and test whether the Notch signal underwent activation in the melanoma cells. Then one can learn accurately if it is benign or metastasizing,” she said.