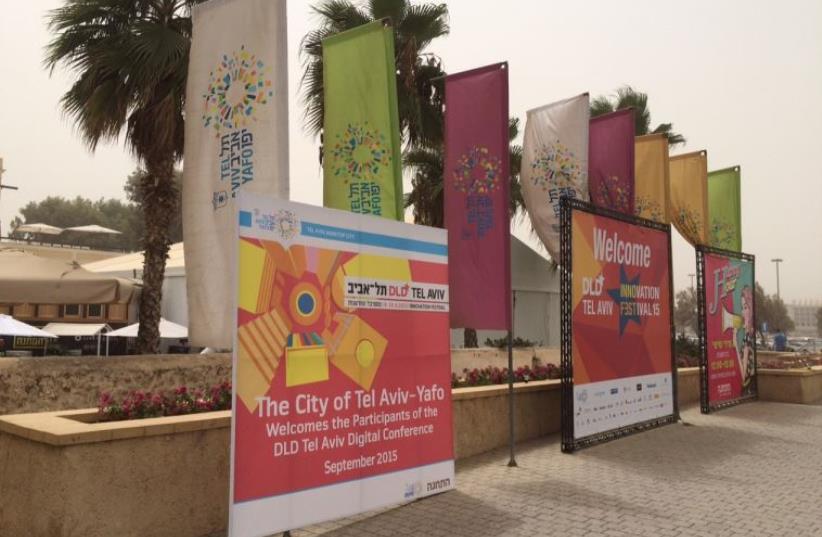 The DLD Tel Aviv Innovation Festival 2015
(photo credit: JULIE STEIGERWALD)
Advertisement
As Israel is the nation with the most number of start-ups per capita, navigating the innovative realm can seem just as daunting and overwhelming as dating in the digital age. However, when the opportunity arises to become acquainted with many of the budding companies - you see just how vast the ecosystem really is. In a fashion similar to that of speed dating, The Jerusalem Post sat down with a number of start-up executives last week during the 2015 DLD Tel Aviv Innovation Conference in an event designed to allow the innovators to briefly give a pitch and rotate among members of the press.While each “session” was supposed to be limited to 10 minutes, the brevity of each meeting was, like in the formalized dating system, noted by certain standout qualities.Of the nearly dozen start-ups encountered at the event, here is a list of six of the most unique and pertinent start-ups that met with the Post:Cimagine Furniture and home-ware consumers have the option of virtually visualizing products in their homes or offices prior to purchase with Cimagine’s augmented commerce technology.The Cimagine solution utilizes augmented reality (AR) technology to superimpose digital 3D images of an item onto a selected environment. Cimagine’s mobile device app allows users to scan  products in-store or online and overlay a 3D representation of the object in an accurate manner that provides views from all angles, distances and color variations. While the start-up founded in 2012 currently pertains to furniture and electronics, CEO and co-founder Yoni Nevo says in the future the company may expand to include jewelry and apparel.

Sage Recipe BoxAiming to change the way people discover cooking recipes, Sage Recipe Box is developing an app that seeks to serve as a social recipe-sharing platform. The start-up is developing a pilot and seeks to launch its free app in the coming two months. The food-based initiative’s vision is to provide a digitally-oriented recipe database cum social network where users can, for instance, upload images of their grandmother’s treasured recipes  and add in text, links and photos. The app will also include a subscription-based dimension for professional chefs, food bloggers and food companies that seek to gain more visibility. “Cooks like to brag about what they make, but fettering on various blogs and social media is time consuming. We bring cooks to one place with no need to surf around for like minded people,” says co-founder and product manager Nivi Chaimov.Shopnfly

Last-minute shopping during travels no longer has to be such a time-consuming concern with this pre-travel shopping platform that allows users to search and compare products at a duty-free price, and have the goods delivered to the airplane, duty-free stores or hotels. Established in 2012, the Tel Aviv-based online shopping marketplace has a partnership with El Al, and allows passengers to access its platform that compares prices in its network of international vendors. Shopnfly CTO and co-found Eylon Steiner says the start-up’s vision “is to be like booking.com but for shopping.”SecBiAs the age of cyber security become ever the more demanding, SecBi provides a solution using machine learning that drastically shortens the response time to cyber incidents.Based in Israel’s cyber capital of Beersheba,  the 2012-founded SecBi helps even the most experience security teams and analysts cut the time it take to recognize and respond to an attack by mitigating alerts and data, and automating analysis to determine legitimate threats. SecBi CEO Gilad Peleg says his company helps to “connect the dots” and sort through the vast information from log data and security information and event management (SIEM).
SCREEMOSCREEMO provides the next-generation of interactive branding and advertisement. The Tel Aviv-based start-up’s solution involves an algorithm that eliminates the need for developers so that retailers can use the platform to engage consumers with real-time games, voting and surveys that run on digital screens and customers can connect to via smartphones. The SCREEMO technology uses a mobile app and digital ad space in movies theaters, malls, concert venues and sports arenas to allow retailers to increase sales, create a social buzz and promotes products and services. For example, a beverage retailer can use the technology to engage customers in an easy game that provides winners with a coupon.CEO and co-found Adir Zimerman says the start-up, which turns digital screens into banners, is looking to expand its offices to New York and Shanghai. SeekretlyIf you are looking for a new job but don’t want the risk of your current employer to find out, the Seekretly platform acts as the cross between an anonymous headhunter, HR firm and resume depository. The Tel Aviv-based firm currently operates mainly for the tech industry and seeks to help both the employer and employee centralizing available talent with demand from companies looking for talent. The solution allows users to create an anonymous profile which is match to a relevant position sought after by an employer. Once a hiring company views a specific profile and decides it is relevant, Seekretly informs the applicant who can chose whether to proceed either under the continued veil of anonymity or by lifting secrecy. Ori Raz, Seekretly’s co-founder and CEO, says his product offers a marketplace that matches talent with opportunities and acts as a sort of “headhunter on steroids” at a much lower rate than its competitors.
Advertisement
Subscribe for our daily newsletter