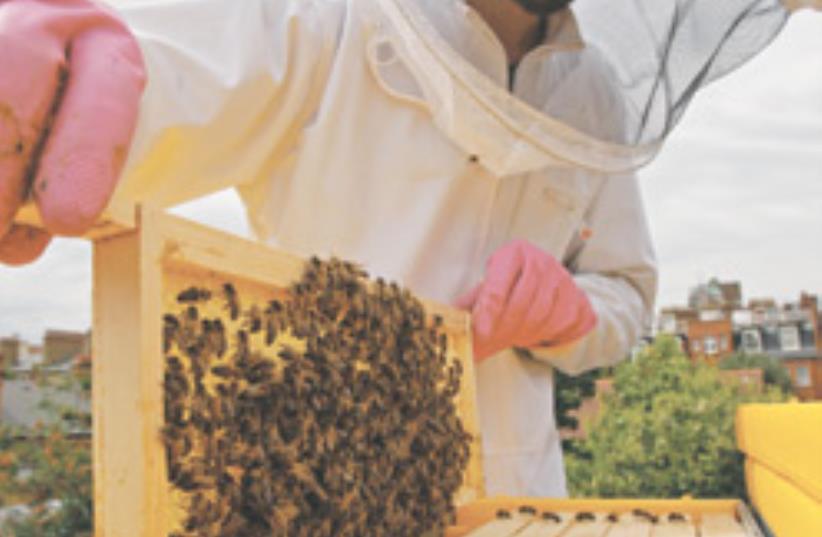 That, at least, is the hope of a Britishgovernment conservation agency, which is urging city-dwellers to becomebackyard beekeepers to combat the declining bee population.

Natural England on Wednesday gave its backing to a "new,contemporary beehive for the urban beekeeper" known as the Beehaus,which it hopes will help convince urbanites that honeybees are hot.

"[The Beehaus is] a great example of how easy it is for anyoneto bring the natural world closer to their doorstep," Natural Englandchief scientist Tom Tew said. "There's no reason why our towns andcities should exist as wildlife deserts."

Britain has 250 species of bees, but - as in othercountries - most are in decline. Scientists say pesticides,disappearing habitat, wet weather and a parasite called the varroa miteare among the culprits.

The makers of the Beehaus - a brightly colored plastic box,roughly the size of a backyard barbecue - say it has twice the room ofa traditional hive, is designed to reduce swarming and can yield up to20 kilograms of honey in a year.

The company behind the Beehaus is Omlet, whose previousinventions include Eglu, an urban chicken coop that has broughtpoultry-keeping to backyards across Britain.

Co-founder Johannes Paul said the Beehaus was designed to show that beekeeping is a "low-maintenance hobby."

"Keeping a hive doesn't take much space, so you can even keep them on balconies, rooftops and obviously gardens," he said.

Long-standing beekeepers welcome the new recruits, but worry some may not realize what they're getting into.

"Like puppies, bees are not just for Christmas," said Tim Lovettof the British Beekeepers' Association. "There is a certain commitmentto this."

The reasons for the decline in bee numbers are still not fullyunderstood. The Beekeepers' Association says almost a third of thecountry's honey-bee colonies were lost in 2007-2008, due in part to anexceptionally wet summer.

This year's decline is expected to be less severe, thanks largely to better weather.

Farmers have warned that the disappearance of bees coulddevastate food crops and the environment because about three-quartersof flowering plants rely on birds, bees and other pollinators to helpthem reproduce.

Beekeeping's geeky image may be changing as the eco-consciousand affluent take up the cause. The British Beekeepers' Associationsays its membership has grown by 20 percent in the last 18 months, toalmost 20,000.

In the United States, a hive was installed earlier this year on the south lawn of the White House.

The British government has set up a National Bee Unit andincreased research funding to try to stop the insects from disappearing- though beekeepers say more must be done, and faster.

"There's no need for panic," said Lovett. "But I think there is need for a little urgency."