By NIV ELIS
JULY 9, 2014 10:55
Billionaire philanthropist David Azrieli
(photo credit: Courtesy)
Advertisement
Billionaire real estate tycoon David Azrieli, best known for the three iconic, geometric Tel Aviv towers bearing his name, died on Wednesday in his country home north of Montreal at the age of 92.His Azrieli Group owns over a dozen shopping malls in Israel, plus office buildings and subsidiaries in the energy, water and environment industries (Sonol, Supergas and GES). It also owns 20 percent of credit card company Leumi Card and 4.8% holdings in Bank Leumi Le-Israel Ltd.Azrieli, whose $2.9 billion net worth placed him No. 520 on Forbes’s billionaires list, had a lifelong affair with the Zionist dream.“David Azrieli was an imaginative entrepreneur, passionate Zionist, and among the builders of Israel,” said Labor Party leader Isaac Herzog, whose father fought alongside Azrieli in the 1948 war.“Despite his business success, he always maintained his modest ways, and that fact is the greatest testament to him.”In a statement, the Azrieli Group said that “David decided to concentrate his entrepreneurship, investment, economic development and building here in Israel for the good of Israel. That is what he promised, and that is how he behaved his whole life.” 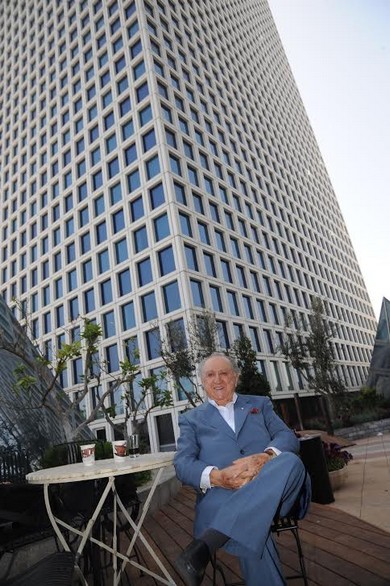 Born in Poland in 1922, Azrieli fled from the Nazis at the age of 17 and slowly made his way east. In the fall of 1942, he joined the Polish “Anders” Army in Bukhara and moved with it into Iran and then to Baghdad, where he met two young Hagana representatives who convinced him to move to Palestine. Their names were Moshe Dayan, the future defense minister, and Enzo Sereni, who would go on to found kibbutz Givat Brenner.Azrieli fought in the Seventh Brigade during the War of Independence.Though he began his studies at the Technion-Israel Institute of Technology in 1942, he completed his degree over a decade later at the Université de Montréal following his 1954 move to Canada. There he married Stephanie Lefcort, who bore their four children, Rafael, Sharon, Naomi and Danna.In Canada, Azrieli started his real estate business Canpro, but he was always drawn to Israel. Two decades later, in 1985, he embarked on plans to build a mall in Ramat Gan: the Ayalon Mall.“What my revolution has done is to provide young people in every corner in Israel the same equality and happiness they would feel by being in a mall in London or New York,” he told The Jerusalem Report last year.From there, he went on to develop malls all over the country, building an empire in the process.Hi daughter Danna, who served as vice chairwoman of the Azrieli Group, took over his role as chairman on Thursday as he ailed.Azrieli was also an ardent philanthropist. The family’s Azrieli Foundation focuses primarily on education, donating large sums to schools and universities, funding Holocaust education, and creating programs for early education and intervention.The family, which gave some $100 million in philanthropic and charitable funds in the past 23 years, recently vowed to disburse the same amount in the coming five years.“Money means nothing to me personally except as a means to build another building,” he said.In addition to his generous giving and the profound impact he had on Israeli commerce, his legacy will always be starkly visible in the form of the circular, triangular and square towers rising up in the heart of Tel Aviv.And even in the future, that legacy will continue to grow: Plans are already under way to build a fourth, oval-shaped tower.
Advertisement
Subscribe for our daily newsletter