GM says new Volt to get 230 mpg in city driving 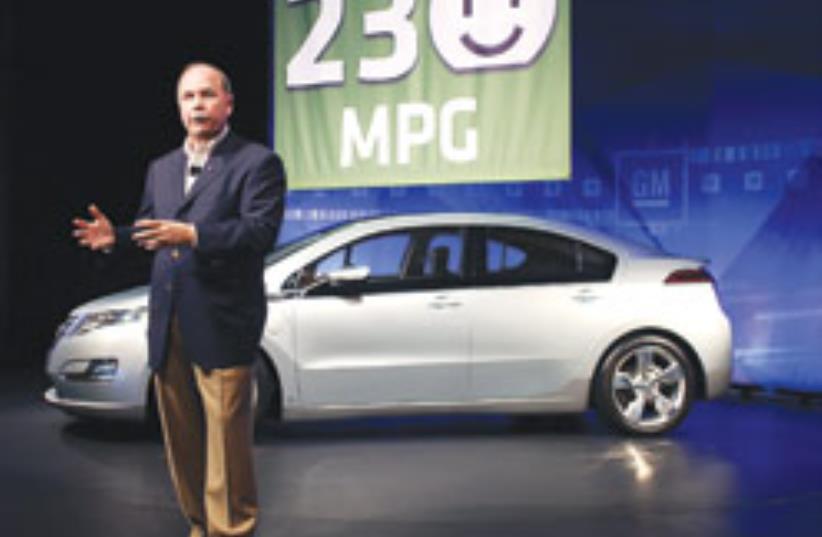 Fritz Henderson, GM's president and CEO, addresses
(photo credit: AP)
Advertisement
General Motors Corp. said Tuesday its Chevrolet Voltrechargeable electric car should get 230 miles per gallon (98kilometers per liter) of gasoline in city driving, more than four timesthe current champion, the Toyota Prius.
The Volt is powered by an electric motor and abattery pack with a 40-mile (65-km.) range. After that, a smallinternal combustion engine kicks in to generate electricity for a totalrange of 300 miles (480 km.). The battery pack can be recharged from astandard home outlet.
GM came up with the 230-mile (370-km.) figure in early testsusing draft guidelines from the US Environmental Protection Agency forcalculating the mileage of extended-range electric vehicles, said TonyPosawatz, GM's vehicle-line director for the Volt.
If the figure is confirmed by the EPA, which does the tests forthe mileage posted on new-car door stickers, the Volt would be thefirst car to exceed triple-digit gas mileage, Posawatz said.
GM has produced about 30 Volts so far and is making10 a week, CEO Fritz Henderson said during a presentation of thevehicle at the company's technical center in the Detroit suburb ofWarren.
Henderson said charging the volt would cost about 40 cents a day.
"The EPA labels can and will be a game-changer for us," he said.
Most automakers are working on similar plug-in designs, but GMcould be the leader with the Volt, which is due in showrooms late in2010.
Toyota's Prius, the most efficient car now sold in the US, gets48 mpg (20 kpl) of gas. It is a gas-electric hybrid that runs on asmall internal-combustion engine assisted by a battery-powered electricmotor to save gasoline.
The first-generation Volt is expected to cost near $40,000,making it cost-prohibitive to many people even if gasoline returns to$4 per gallon. The price is expected to drop with future generations ofthe Volt, but GM has said government tax credits and the savings onfuel could make it cost-effective, especially at 230 mpg (98 kpl).
"We get a little cautious about trying to forecast what fuelprices will do," Posawatz said. "We achieved this number, and if fuelprices go up, it certainly does get more attractive even in thenear-term generation," he said.
Figures for the Volt's highway and combined city/highwaymileage have not yet been calculated, Posawatz said. The combinedmileage will be in the triple digits as well, he said, but bothcombined and highway will be worse than city because the engine runsmore on longer highway trips.
The EPA guidelines, developed with input from automakers,figure that cars like the Volt will travel more on straight electricityin the city than on the highway. If a person drives the Volt less than40 miles (65 km.), in theory they could go without using gasoline.
The mileage figure could vary as the guidelines are refined andthe Volt gets further along in the manufacturing process, Posawatzsaid.
Advertisement
Subscribe for our daily newsletter