‘Anti-Israel comments from Christians must be put in Mideast context’

They are held hostage by the Muslim majority around them, says Nonie Darwish. 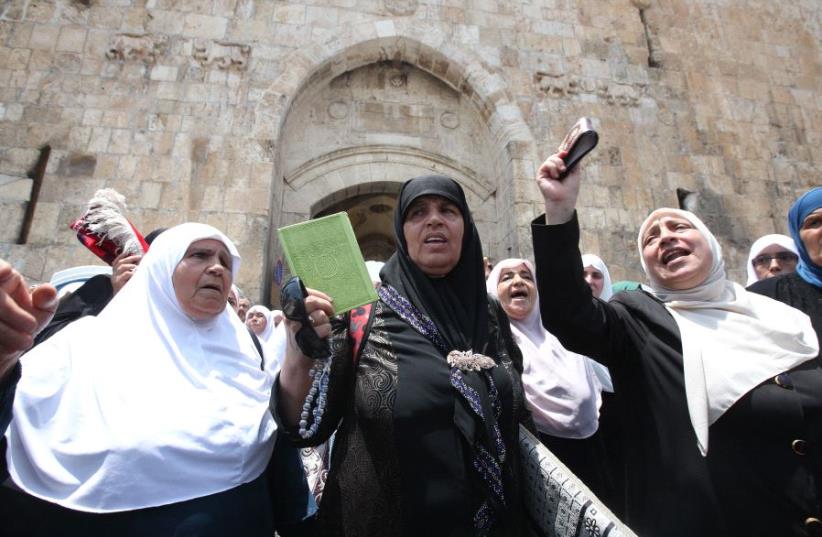 Muslim women at the Lions' Gate, Jerusalem, July 2017
(photo credit: MARC ISRAEL SELLEM/THE JERUSALEM POST)
Advertisement
The West must understand that Middle East Christian leaders’ anti-Israel comments come within the context of a dominating Muslim majority, an Egyptian-American human rights activist said. “It is dangerous for the West to accept Arab antisemitic propaganda voiced by some Christian leaders in the Middle East,” said Nonie Darwish, the author of Wholly Different; Why I chose Biblical Values Over Islamic Values.“They are held hostage by the Muslim majority around them. Since the age of the Internet, even many Arabs have stopped buying Arab propaganda.”Writing for the right-wing think tank Gatestone Institute, Darwish, who was born a Muslim and lived in Egyptian-occupied Gaza Strip, was referring to a statement made on MSNBC by retired American Col. Lawrence Wilkerson during the recent Temple Mount crisis.The former chief of staff to secretary of state Colin Powell said that Jews pose the biggest threat to Christians in the Middle East. He came to this conclusion based on a conversation that he had with a Catholic bishop while in Ramallah 15 years prior on a trip to meet with Palestine Liberation Organization Chairman Yasser Arafat. “It is most unfortunate that a former high-ranking State Department official decided to blame Israel during the recent crisis, in which Jews were the obvious victims,” said Darwish, who moved to the US in 1978 with her husband, later becoming a citizen and converting to Christianity. “It is more than unfortunate that Wilkerson took the bishop’s statement at face value instead of recognizing the complexities of the Middle East, where ‘no’ and ‘yes’ rarely mean ‘no’ and ‘yes.’”The fact that Israel is the only country in the world that has full freedom of religion and allows Christians to practice their faith as they wish, was completely ignored by Wilkerson.Darwish, founder and president of the Arabs for Israel group, said that Wilkerson showed that he was completely disconnected from the reality of Israel and the Middle East. “Despite the glaring truth that there is oppression of Christians in the Middle East, Wilkerson evidently does not know that the flock of the Ramallah bishop lives in an Arab city, speaks and prays in Arabic, and in an era of Arab nationalism, many believed they were Arab first and Christian second,” she said. This is most clearly seen in the education system, where Arab Christians are fed the same propaganda as are Muslim Arabs. The end result of having anti-Israel and antisemitic Christian Arabs should not be surprising then, Darwish said.  “Christian children are fed the same education, filled with hatred of Jews, in Arab schools; they teach lies such as, ‘Jesus was a Palestinian,’ ‘Jerusalem was an Arab city conquered by Jews,’ ‘Jews are behind all the ills of Arab society,” ‘Yasser Arafat was poisoned by Israelis’... and so on; the variations are endless,” she said.“Sadly, Christians in the region, instead of recognizing that Jews are probably their natural allies, have ended up falling into the Middle Eastern trap of trying to appease the Muslim majority around them, and subscribing to its sweeping antisemitism.”Ultimately, the Islam critic said that the onus lies on the West to reveal the truth behind the comments, and not to be satisfied with taking the statements as is. “Even though accusations in the Arab media against Israel are false, the Western media are not interested in exposing them,” she said.
Sign up for our Christian World newsletter >>