"I am thankful she not only gave her own things to another person whom she did not even know, but also gave them with a happy heart." 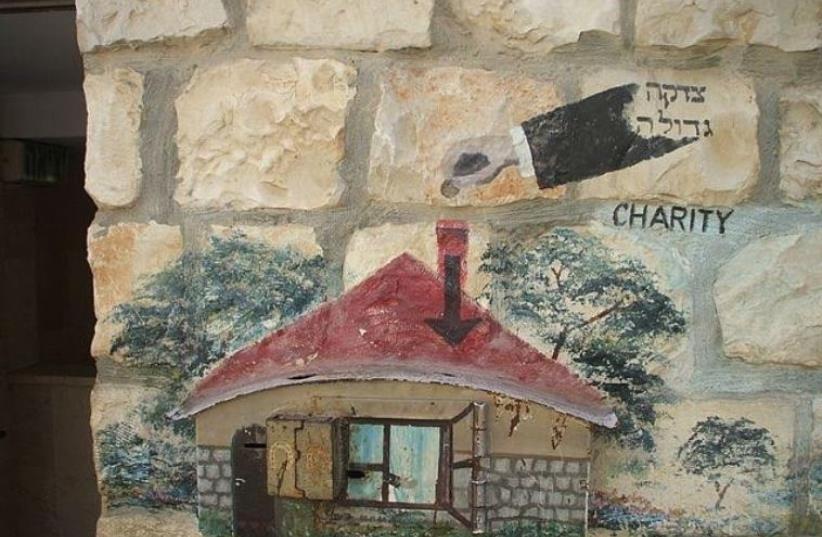 A Charity box in Paris.
(photo credit: SHLOMI MOSHEYOFF/WIKIMEDIA COMMONS)
Advertisement
Christian parents face daunting challenges as they attempt to raise godly children in the modern world.While contemporary culture grows increasingly self-centered and self-serving, biblical values such as charity, compassion and sacrifice seem to decline in general. Even those in the body of Jesus can be subtly influenced by the “selfie” generation and, thus, miss opportunities to teach their children the value and discipline of “self-less” giving.Often we fail to teach charity because we fail to practice charity ourselves.As Christians, it is important for us to give – and we have many reasons to do so. First, and foremost, our eternal life is based on a gift: God gave us the ultimate gift, and provided the pathway to salvation, through His son, Jesus.Think about that for a moment. Could there be a greater gift? Second, we are supposed to be the light of the world (Matthew 5:14), and we accomplish this by cheerfully giving to others so they can see and experience God’s love through us.Finally, most of us have been on the receiving end of such kindness at one point in our lives and, as a result, experienced the renewal of hope and strengthening of faith that flow through charity.As Christian parents, our duty is to help our children better understand God’s word and follow in His ways (Prov. 22:6). When it comes to charity, it’s not enough to simply give – we also need to help our children understand why we give as Christians. And that is because Jesus first gave to us. There is no better way to teach this than by example.I’ll be the first to admit that “charity” often didn’t look much like “biblical charity” in my own home until recently. The typical routine unfolded as follows: feel overwhelmed with the accumulation of “stuff” at home (toys, clothes, games, shoes, etc.), resolve to de-clutter home, sort items to better organize rooms and space, fill bags with unnecessary and outgrown overflow, and, finally, hurriedly drop off “charity” bags at a donation center so I could rush to the next commitment on my busy schedule. Something about this just didn’t seem or feel right.Then, one day, I had an epiphany while collecting random things from around the house. Knowing that I would again just fill up a bag or two of “stuff” and take it to the donation center, it struck me that I should use this as a teaching experience for my daughter.
I explained to her that we have more than we need, and that there are others who have very little or, sometimes, nothing. Instead of simply de-cluttering, we went through her toys and clothes and discussed what she would like to give to other children to wear and enjoy.I asked her, “What do you think another little girl would like?” “A puzzle!” she quickly said. And, with that, we started to sort her toys (and, yes, even toys she still played with) to pick “gifts” we could provide to a girl without a mother or father. The activity became something beyond worldly charity. It transformed into something I did not expect – my daughter was excited to give her treasures to, and share them with, someone else.We contacted a local children’s home and made an appointment to take by what we had chosen to give. The girl who was to receive the gifts was not there at the time, so we dropped them off and went on our way home. I thought maybe my daughter would be a little sad to give her toys away; however, instead of being sad, she told me how much she enjoyed giving and sharing her things with the other girl. Once we returned home, she explained the trip and gifts to her father and, then, could not wait to call her grandmother to tell the story about how she gave with a happy heart to another little girl.This experience transformed me and my daughter both. We went back a few days later to the children’s home to see how else we could help and to learn about the needs of the children there. My daughter is already working on more ways to help, and I would not be surprised at all if she wants to make another donation as soon as she can.I am thankful she not only gave her own things to another person whom she did not even know, but also gave them with a happy heart.As God’s people, we have been blessed by Him, and it’s incumbent on us to help others when we can (Luke 12:48).Involving our children in the process of giving shapes and molds their hearts at a young age and encourages them to follow after Him.
Giving also helps children see how they can live out God’s commandments at any age because, after all, kids can do amazing things too!The writer is the founder of Scarlett Gray Publishing, a Christian publishing company dedicated to producing children’s books centered on God’s word. She is also the author of A to Z with the One True King. She can be reached at Suzanne@ScarlettGrayPublishing.com.sign up to our newsletter