Bishop on stone attack on Catholics: ‘Remedy radicalism and intolerance’ 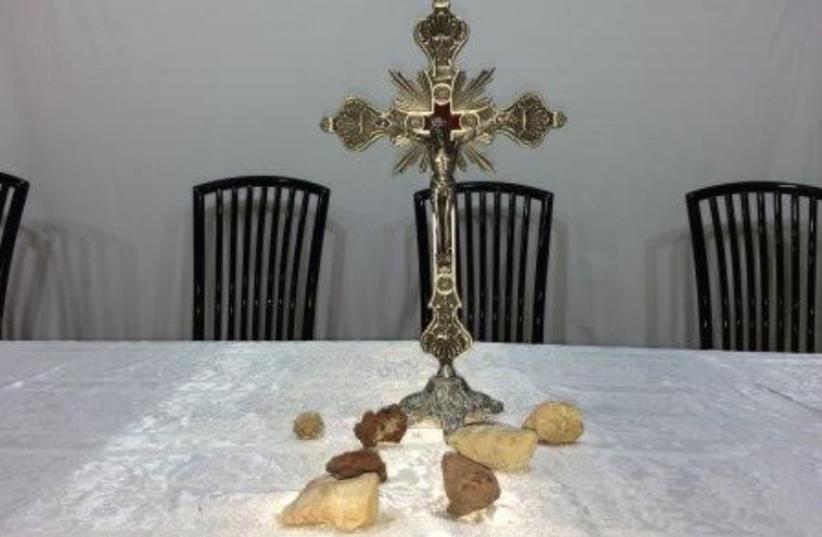 The stones community members collected
(photo credit: VICARIATE FOR HEBREW-SPEAKING CATHOLICS)
Advertisement
The community in Rehovot must “remedy radicalism and intolerance,” the local Catholic leader said after local Jewish youth threw stones at a Mass ceremony. Last Saturday evening, a group of local youth threw stones at those attending Mass in the courtyard of the chapel of the community of St. Therese of Lisieux. The worshipers were celebrating the solemn Mass of the feast of Corpus Christi. The celebration took place outside as the chapel wasn’t big enough to accommodate all those attending.
Bishop William Shomali, patriarchal vicar, said more must be done in order to instill in the youth an education that is based on respect for others and beliefs, no matter what they be.“It is sad that people in prayer, for most part, women working in Rehovot Jewish homes, were the victims of a hail of stones while they were in prayer,” said Shomali on Tuesday, the Latin Patriarchate of Jerusalem reported. “Once again, we draw attention to the culture of contempt for others that exists in some Israeli circles, and the need to find solutions to cure society of radicalism and intolerance. It is true that these are young 14-year-olds. However, adults and teachers take full responsibility.”The Vicariate for Hebrew-speaking Catholics in Israel’s website reported that during the Mass, worshipers saw two young teens, who they have surmised to be about 14-year-old, looking into the courtyard. Shortly after, the celebrants received a barrage of rocks into the courtyard. “Providentially the stones did not do any harm. The community continued its prayers,” the website said. They received another barrage and this time worshipers were hit, “although again thank the Lord no one was seriously hurt,” the vicariate said. The local community also reported that worshipers gathered some of the stones at the end of the service and laid them at the foot of the cross on the altar. Filipino care givers founded the community, and now the community has grown to include other migrant care givers, including those from India, Sri Lanka and African countries. Some of the community’s members also include students at Rehovot’s two institutions of higher learning, the Weizmann Institute and the Faculty of Agriculture of the Hebrew University of Jerusalem.To learn more about Christianity in Israel, check us out at @christian_jpost, on Facebook.com/jpostchristianworld/ and see the best of the Holy Land in The Jerusalem Post - Christian Edition monthly magazine.sign up to our newsletter