By REUTERS, YAAKOV LAPPIN
NOVEMBER 8, 2013 11:27
Border police 370
(photo credit: Yaakov Lappin)
Advertisement
The IDF on Saturday evening uncovered four pipe bombs in the possession of a Palestinian man during a routine check at the Bekaot Crossing, north of Jericho.Army sappers were called to the scene to neutralize the explosives. The suspect was arrested.Separately on Saturday, Palestinians threw rocks at an Israeli vehicle near Tekoa, in Gush Etzion, damaging the car, but failing to injure those inside. Soldiers launched a search of the area.A knife-wielding Palestinian terrorist tried to stab a Border Police officer at a checkpoint near Jerusalem. Security forces shot and killed him, police said.A police spokesman said the Palestinian man had brandished a knife and ignored calls from Border Police officers to stop before he was shot.Palestinian medical officials identified the man as a 23- year-old from Hebron.Early on Friday morning, Palestinian rioters hurled firebombs at an civilian vehicle near Tekoa, lightly injuring two Israelis inside. The civilians escaped from the vehicle, which was completely destroyed. Paramedics evacuated the wounded to hospital.Reuters and Jerusalem Post staff contributed to this report. 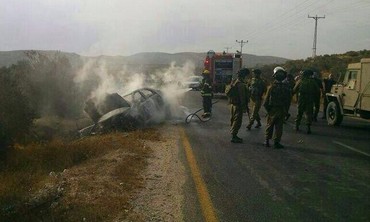 The IDF launched searches for the attackers.Also on Friday, Palestinians in Bani Naim, east of Hebron, told the IDF that two vehicles were set alight and hate graffiti was sprayed on a wall in their village. Security forces are investigating the incident.During the arrest of two security suspects in Hebron on Friday, soldiers from the Givati infantry brigade and the Israel Police uncovered Carl Gustav-type firearms and ammunition. IDF sappers seized the weapons.In an earlier incident on Thursday in another part of the West Bank, soldiers killed a man who fired a flare gun at Israelis at a roadside bus stop, a witness and Israeli authorities said.Reuters and Jerusalem Post staff contributed to this report.
Advertisement
Subscribe for our daily newsletter