By JPOST.COM STAFF
JUNE 23, 2012 18:16
IAF strike in Gaza 370
(photo credit: REUTERS)
Advertisement
Defense Minister Ehud Barak and IDF Chief of General Staff Lt.-Gen. Benny Gantz were scheduled to hold a situational briefing on the sixth day of violence between Israel and the Gaza Strip Saturday evening at the Defense Ministry in Tel Aviv.

Meanwhile, the IAF struck a rocket-launching cell in the northern Gaza Strip making final preparations to launch projectiles into Israel Saturday evening, the IDF Spokesman's Office said. Palestinian reports said one person was killed and ten were injured in the strikeEarlier Saturday, the IAF struck another Palestinian terrorist who was preparing to launch a rocket into Israeli territory from northern Gaza, the IDF stated. Medical officials in Gaza said at least 30 people were injured in IAF strikes Saturday.In the earlier strike, the IDF said it recorded a direct hit and thwarted a rocket launch. A video released by the IDF Spokesman's office showed the targeting and attack of a man it said was an operative of the Popular Resistance Committees.The air strike followed a barrage of rockets fired into southern Israel Saturday morning, injuring one man and causing damage to a school and factory in Sderot. 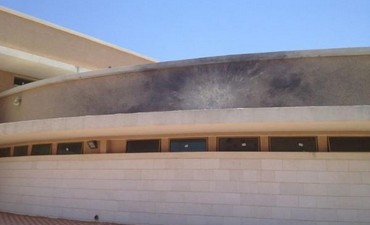 (Photo: IDF Spokesman's Office)The wounded man, approximately 50 years old, suffered moderate-to-severe injuries after being struck by shrapnel in the neck and stomach. He was rushed to Barzilai Medical Center and was fully conscious. Two other residents suffered shock in the Palestinian attack."Israel cannot remain silent in the face of continued rocket fire from the Gaza Strip," Home Front Defense Minister Matan Vilna’i said earlier Saturday during a visit to the afflicted areas of Sderot and the Sha'ar HaNegev Regional Council area.Vilna'i also paid a visit to the IDF's Gaza Division for an operational review of recent events. "We hold Hamas fully responsible for everything that happens in the Gaza [border area]," Vilani said during the visit. "Israel is working, and will continue to work with a heavy hand against those terrorists that want to escalate the situation in the region."The minister stressed that, "the state attaches great importance to protecting the cities that lay within a radius of 4.5 to 7 km. of the Gaza Strip."Hamas's armed wing, the Izzadin Kassam Brigades, released a statement Saturday warning Israel over the recent escalation of violence in Gaza, saying if Israeli airstrikes continue "we are ready to smash [Israel's] arrogance."Israeli attacks, a statement published online by the group said, are a crime which Hamas cannot remain silent about and vowed a "proper" response.Palestinians have fired over twenty rockets from Gaza into southern Israel since midnight on Friday, police said. Fifteen of those landed in the Lachish region, and five in the Negev. One rocket hit and damaged a school in Sderot. No injuries were reported. The Iron Dome rocket defense system intercepted five of the rockets. 11 rockets were fired toward the Ashkelon Coast Regional Council, Channel 10 reported. No group has yet claimed responsibility for the recent round of rockets. Earlier, the IDF denied Palestinian reports that an IAF strike on Gaza had killed a four-year-old-boy and wounded seven others on Saturday. Quoting Gazan Health Ministry spokesman Ashraf al-Qidra, Palestinians news agency Ma'an reported that Israeli fire killed the boy in the Abasan neighborhood east of Khan Younis. The IDF denied any connection to the incident and stated that the IAF had not carried out any further strikes between the early morning and Saturday afternoon.

In light of the recent wave of rockets, the IDF instructed residents in the area to stay within 15 seconds of protected spaces. In a conversation with Army Radio, Sderot Mayor David Buskila called on the government to return quiet to the region. The violence all but erases diplomatic progress made in the form of an informal ceasefire brokered by Egypt on June 20, which brought two days of relative quiet to southern Israel.Early Saturday morning, the IAF struck three Palestinian terror bases in the Gaza Strip in response to continued Palestinians rocket firing into Israel. Palestinian media reported that between 17 and 21 people were wounded in the strike - the third of its kind since Friday, which according to the reports have also resulted in the death of at least one terrorist.Yaakov Lappin contributed to this report
Advertisement
Subscribe for our daily newsletter