By YAAKOV LAPPIN
SEPTEMBER 21, 2012 14:28
IDF patrol in South after 2011 cross border attack 370 (R)
(photo credit: Ronen Zvulun / Reuters)
Advertisement
A terrorist cell opened fire on IDF soldiers overseeing construction of the fence at the Egyptian-Israeli border on Friday afternoon. The soldiers returned fire, and a heavy firefight ensued. Three terrorists were killed in the fighting, the IDF Spokesman said. One of the dead terrorists had a suicide bomb belt around him.IDF Chief of Staff Lt.-Gen. Benny Gantz was due to hold a special evaluation of the situation. "The IDF stopped a very big terrorist attack," IDF spokesman Brig.-Gen. Yoav Mordechai said. "The incident occurred in the Har Harif area... in an area where the [border] fence has not yet been built." 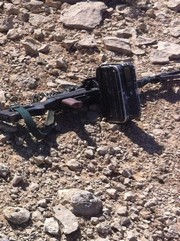 Artillery Corps soldiers were overseeing the construction of the fence in the area. The second ground unit that stormed the terrorists and killed the gunmen came from the Karkal (Wildcat) Battallion. Both male and female combat soldiers serve in the Karkal unit. The terrorists were heavily armed. During the firefight, a suicide bomb belt around one of the terrorists went off."No one has been kidnapped, and there are no terrorists in Israeli territory," Mordechai added.The Sinai Peninsula has become a hornet's nest of jihadi activity, and is also often used by Gaza terror elements to launch attacks on the southern Israeli border.On Wednesday, three Palestinian terrorists were killed in an airstrike in Gaza. They were planning to carry out an imminent terror attack in Israel, and in the past had attempted to smuggle explosives out of Gaza and into Israel through Sinai. The terrorists belonged to the Hamas offshoot group Defenders of Al-Aqsa.Last month, terrorists with explosives in Sinai murdered 16 Egyptian security personnel and tried to burst through the Israeli border with vehicles they hijacked from an Egyptian base. The IDF stemmed the attack and destroyed the hijacked vehicle, killing the terrorists.In 2011, eight Israelis were murdered by a terror cell that crossed into Israel from Egypt's Sinai.
Advertisement
Subscribe for our daily newsletter