Gantz tells commanders to explain to their subordinates that Facebook is not a "command tool."

By YAAKOV LAPPIN
MAY 1, 2014 11:38
Social media IDF protest
(photo credit: FACEBOOK)
Advertisement
Addressing an unprecedented outpouring of online support for an IDF soldier who cocked his firearm while being confronted by Palestinian youths in Hebron this week, IDF Chief of Staff Lt.- Gen. Benny Gantz said Thursday that soldiers should direct concerns to their commanding officers, rather than advertise them on Facebook.The army will investigate the incident in Hebron, as well as the support for the soldier, David Admov, by tens of thousands of other soldiers on social media websites.Many posted photographs of themselves with the sign: “I support David the Nahal [Brigade] soldier.”“It’s important that we remember and tell our subordinates in a clear manner that Facebook is not a command tool. It is here, and that’s a fact, but it is not a replacement or even a parallel channel for dialogue between commanders and their soldiers,” Gantz said. 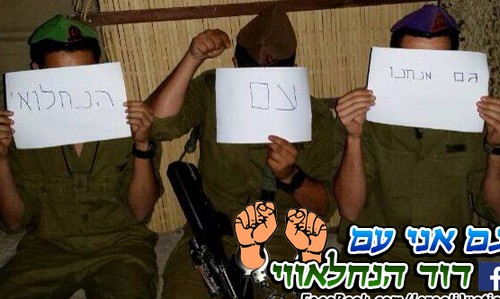 Gantz ordered officers to clarify that point to their soldiers in the coming days.Admov has been ejected from his role as a combat soldier, but not because of the Hebron confrontation, IDF Spokesman Brig.-Gen. Moti Almoz said Wednesday.Rather, Admov was convicted of assaulting one of his officers.The IDF is investigating the Hebron confrontation caught on film, in which Admov is seen cocking a Tavor assault rifle after becoming involved in an altercation with Palestinian youths, some of whom surrounded him, and one of whom had brass knuckles.“The soldier was ejected because of a completely different reason,” Almoz said. “He was convicted of using violence against his commanding officer for the second time. His conduct towards the [Palestinian] suspects is a completely separate incident, and it will be investigated.”This week, many soldiers expressed outrage over social media websites over what they said is a policy of IDF restraint that is preventing them from defending themselves while on duty in the territories.