By YAAKOV KATZ
Map of Hizbullah bunkers in south Lebanon 311
(photo credit: The Washington Post)
Advertisement
The IDF has released an aerial map of Lebanon revealing the location of some 1,000 different military sites and facilities. The map was published on Wednesday in the Washington Post.According to the map, which the newspaper said it obtained from the Israeli military, Hezbollah has around 550 underground bunkers throughout Lebanon, around 300 surveillance sites and another 100 or so additional installations.RELATED:
Will Hizbullah avenge the hit on its terror chief?
Egypt: Hizbullah and Iran want to 'ignite the region'
Nasrallah: Unrest in Egypt will transform Middle EastThe bunkers are likely being used by Hezbollah as command posts as well as storage centers for the large amounts of weaponry Syria and Iran have transferred to Lebanon since the Second Lebanon War in 2006.According to the map, most of the facilities are located in southern Lebanon where Hezbollah stores most of its short and medium-range rockets inside close to 200 different villages. Hezbollah is believed today to have over 40,000 rockets and missiles, including several hundred longrange missiles that can hit targets in Tel Aviv with superior accuracy.The decision to leak the map to the Washington Post comes several months after the IDF divulged classified intelligence information on the southern Lebanese village of El-Khiam in the summer. During a briefing then to the Israeli media, the IDF revealed satellite footage of the village, located north of Metulla, detailing the exact location of Hezbollah arms caches and command posts.While Hezbollah is continuing to build up its arsenal, it is currently believed by the IDF to be deterred from renewing hostilities with Israel.Israel is revealing the information as part of a public diplomacy campaign aimed at preparing the world for the widespread devastation that will likely occur in Lebanon if there should be a new Israeli war with Hezbollah, due to Hezbollah’s decision to station its assets inside populated villages.Below are the two images released by The Washington Post. The first image, labeled "Hizbullah underground infrastructure in south Lebanon," purports to show over 500 bunkers, 300 monitoring sites, and 100 other sites. 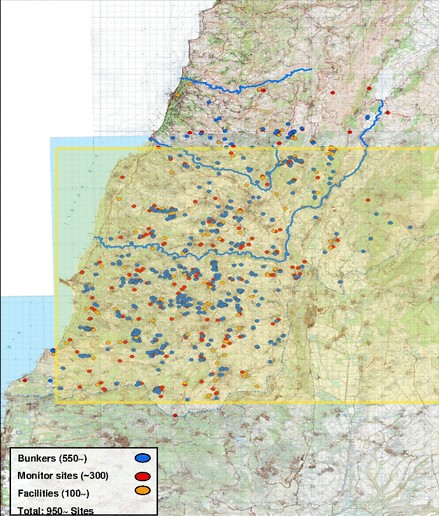 The second map, a close-up of the southern Lebanese village of el Khiam, includes symbols indicating hospitals and homes. The underground sites appear to be situated throughout the populated village. 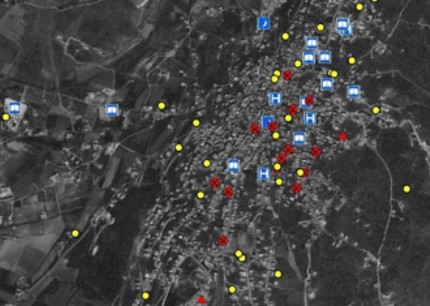