By YAAKOV LAPPIN, KHALED ABU TOAMEH, TOVAH LAZAROF
Palestinian militants in Ramallah 370
(photo credit: REUTERS/Darren Whiteside)
Advertisement
A large scale Palestinian attack against security forces in Kalandiya early Monday in which rioters shot at army jeeps, hurled washing machines and large concrete blocks from the rooftops left three Palestinians dead from Israeli gunfire.Some 20 Palestinians were also injured in the clashes, including a few from gunfire.Kalandiya has a history of serious violence, but the size and scope of the rioting that erupted on Monday is highly unusual, a senior army source said, as he described an operation to arrest a suspected Tanzim terrorist.The incident began when security forces – elite border police officers tasked with making an arrest and soldiers from an Artillery Corps battalion sent to secure them – entered Kalandiya at 5 a.m.Their mission was to arrest a security suspect described by the IDF as a senior terrorist figure who dealt in weapons and organized past disturbances in the Kalandiya refugee camp, located in the West Bank between Ramallah and Jerusalem.
IDF video showing riots at Kalandiya overnight.“This is third time we came to get him,” the senior source said, noting that he had escaped previous attempts to arrest him.The security forces circled a complex of homes. The suspect, who apparently had been out all night, saw the forces and escaped to a rooftop. He jumped from one rooftop to another and entered yet another home.Security forces gave chase, beginning a pursuit that would last for an hour.At the same time, the IDF source said, a riot developed minutes after soldiers and border police entered the area.Some 300 Palestinians circled the soldiers and hurled concrete slabs at them.The IDF attempted to disperse the rioters with nonlethal crowd-control measures.One soldier on a rooftop identified a Palestinian on an adjacent rooftop about to hurl a concrete block on soldiers under him, and shot him in the hand using 0.22 caliber ammunition, the source said. 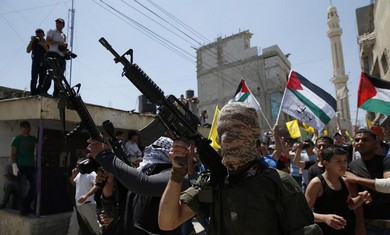 At street level the riot escalated as the mob grew to around 500 people, and the IDF inserted additional soldiers into jeeps to divert the rioters and allow the border police to complete the arrest.At this stage, security forces were being showered with lifethreatening objects from rooftops, including washing machines, bathtubs, refrigerators, blocks and carpets set on fire “that landed on jeeps and could have set them ablaze,” the source continued.“Anything that could be thrown from a rooftop was thrown,” the security source said.Additionally, Palestinian gunfire was directed at the jeeps, and four bullet holes were later discovered in the vehicles, he said.Soldiers opened fire, feeling their lives endangered.Additional soldiers from the battalion were sent to clear an exit path for the security forces, and managed to extract them 25 minutes after the Tanzim suspect was arrested, the source said.He said the soldiers acted properly, proportionally, and in line with the rules of engagement.“This could have ended with many more casualties had the soldiers acted differently,” he said.“When blocks and firebombs are being thrown at you from point-blank range, your life is in danger,” he added. “We had a mission to carry out, and we stood by it. We will complete our mission even if we have to deal with a riot,” he said.
Security forces have been met with violence in the five times they entered Kalandiya in the last five months, the source said.Given the types of objects that were thrown, it was likely that Palestinians had prepared them in advance to attack Israeli security forces the next time they chose to enter the refugee camp, the source said. The IDF is investigating the incident.
The three Palestinians have since been identified as Jihad Aslan, 21, Yunis Jahjuh, 24, and Rubin Zayed, 34.Thousands of residents of the tightly packed camp later carried the three men’s bodies – draped in Palestinian flags with their heads wrapped in traditional black-and-white checkered scarves – in a funeral procession that wound its way through the camp’s narrow alleyways.Later in the day, minor clashes broke out in the West Bank in response to the violence, including at the Kalandiya checkpoint and in Hebron.The Palestinian attack on the IDF was caught on video and posted on the web. In the clips, one can see Palestinians on the rooftop throwing objects at security jeeps as they round a corner.But Palestinians in Kalandiya have reported that not all those shot by the IDF were in the middle of the kind of violent scenes shown in the video.On Monday night the United Nations Relief and Works Agency for Palestine refugees reported that Zayed, one of the three Palestinians who were killed, worked at their offices in Kalandiya. The father of four, it said, was shot in the chest and killed when on his way to work at 7 a.m. and was not engaged in any violence.It reported that a second UNRWA employee, a sanitation laborer, was shot in the leg during the clashes.“UNRWA condemns the killing of its staff member and calls on all sides, at this delicate time, to exercise maximum restraint and to act in accordance with obligations under international law,” it said.According to Hatem Khatib, the IDF entered the camp at 4:30 a.m. and raided his home to arrest his brother Yousef, 24.“After they arrested him, they tied our hands,” he said. The IDF stayed in the house and forced the family to stay with them, he said.“My brother did not resist arrest. We do not understand why they decided to stay,” he said.At around 6 a.m., the streets filled as people left their homes for work and for school, he said.“The soldiers got nervous and started shooting from the window of our home. People started gathering to see what was going on, and there were clashes,” he said.The soldiers shot a cleaner for UNRWA and another man who tried to leave his home, located opposite that of Khatib’s family, he said.The soldiers stayed in his home until 7 a.m., Khatib said.His brother, he said, worked in the Grand Park Hotel in Ramallah. Yousef was arrested when he was 14 and spent nine years in prison, Khatib said.A few days ago, a security officer called him, and Yousef agreed to meet and speak with him, so there was no reason to arrest him, he said.He wondered how his brother could pose a security risk when he had received a permit to enter Israel during the month of Ramadan. He had visited Jerusalem and Jaffa, Khatib said.
Advertisement
Subscribe for our daily newsletter