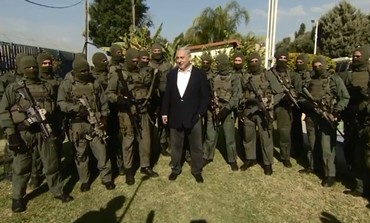 Prime Minister Benjamin Netanyahu visited the headquarters of the elite Israel Police Counter-Terrorism Unit Thursday."We have witnessed a significant decline in the number of those wounded in the south," he said during his visit with the SWAT unit. "In 2012, there were almost 1,000 attempted attacks. In 2013 there were 60. This is the lowest number in over a decade on the Gaza front. The number of those wounded in... Judea and Samaria is also the lowest it has been in a decade; this is despite the fact that the number of attempted attacks there has grown."The premier commended the unit for its work in assisting to lower the number of Israeli injuries from attempted attacks. "In both cases, the decline in the number of those wounded is a result of the welcome activity of the IDF and the security forces including our elite units such as the Counter-Terrorism Unit which I am visiting today. I am proud of them. The people of Israel need to see what they are doing, how they save lives on a daily basis. We will continue to support them so that they may continue guarding our security."