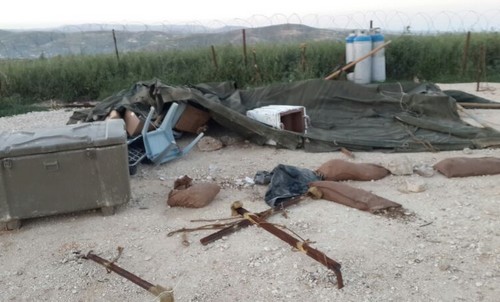 Reserves army post ransacked by settlers at Yitzhar, April 8, Photo: IDF
Reserves army post ransacked by settlers at Yitzhar, April 8, Photo: IDFHundreds of settlers from the Yitzhar settlement in the West Bank rioted and attacked security forces overnight Tuesday after the Border Police destroyed four illegally built structures and seized a caravan.Prime Minister Binyamin Netanyahu, Foreign Minister Avigdor Liberman and Defense Minister Moshe Ya’alon condemned the actions of the settlers.Ya’alon said that such extremist actions only harm the settlement enterprise. He and Netanyahu discussed the matter on Tuesday night. The prime minister asked Ya’alon to act forcibly against such “bullies” and “outlaws.”Security sources said the violence they encountered was extreme, adding that it included rock throwing, tire burning and blocking of roads. Security forces dispersed the rioters with nonlethal crowd control measures.Soon afterwards, a group of 50 to 60 settlers from Yitzhar raided an army post located west of the settlement to defend it from Palestinian terrorist attacks.The settlers destroyed generators, army equipment, heaters and diesel fuel tanks, as six soldiers who manned the position stood on the side and failed to lift a finger to stop them.“They are trained to protect them [the settlers], not to confront them,” a security source said. “The soldiers are not ready to take on a group of 50 to 60 Yitzhar residents, the very people they were sent to defend.”Ya’alon said that while not all Yitzhar residents are violent, Israel is determined to stop radical elements from violating the rule of law.“We won’t allow them to lift a hand against the IDF, the Border Police, the Israel Police and the Civil Administration,” he said. “They will have to obey the law like every Israeli citizen and we will deal with violent activities with full severity, until they stop and understand that one does not lift a hand against the law.”Security sources said that two of the structures destroyed in Yitzhar were inhabited and had to be vacated before the demolition.The IDF did not take part in the demolition, which was carried out by Border Police and police.Six border policemen were lightly wounded in the incident.Four were treated on site, and two others were taken to the hospital.No arrests were made.The razing of the structures took place on Monday, hours after vandals targeted an IDF jeep for the second time in two days in Yitzhar. The jeep’s tires were slashed in what security forces suspect was a far-right attack.On Sunday, the tires of an army jeep, belonging to Samaria Brigade Commander Col. Yoav Yarom, were slashed.“The IDF takes a grave view of any harm caused to army commanders and soldiers, conscripts or reserves, who work day and night to defend the residents of the State of Israel,” the IDF Spokesman Unit said.It condemned the latest incident as “the crossing of a redline.”The Council of Jewish Communities of Judea and Samaria sent a letter to the head of the Samaria Brigade that condemned the violence against the IDF. The settlers’ leaders said they supported harsh actions against the perpetrators of the violence and they spoke of their desire to work with the IDF.But others in the settler movement accused the IDF of exacting revenge for the slashed tires and of exciting a “price tag” attack against the settlement.A Yitzhar spokesman said the demolitions were an act of “collective punishment” against the settlement.It is unacceptable for the government and security forces to destroy the homes of innocent people, the spokesman said. Tovah Lazaroff contributed to this story.