Ukrainian Holocaust Survivor and Refugee Boris Zabarko: “We will stand resolutely for the human dignity of all, embrace life, give hope, fight violence and bless freedom, justice and peace”.

April 28th Poland: Delegation from Germany to travel to Auschwitz to attend March of the Living

On the eve of Yom HaShoah, Israel’s Holocaust Martyrs and Heroes Remembrance Day, March of Life, Germany - in cooperation with the International March of the Living - is organizing a memorial March in Berlin on April 27. In particular, the March organizers noted that a recent study by the World Jewish Congress found that in Germany one in three young people under the age of 25 held antisemitic views.

Under the headline, “From the Heart and on Foot - for Peace, Against Antisemitism", descendants of the victims and descendants of the perpetrators will march side by side, together with politicians from Israel and Germany in a statement of remembrance, reconciliation and against antisemitism. The message of the March has gained added significance in the aftermath of several anti-Israel demonstrations in Berlin during the weekend, where antisemitic slogans where chanted. 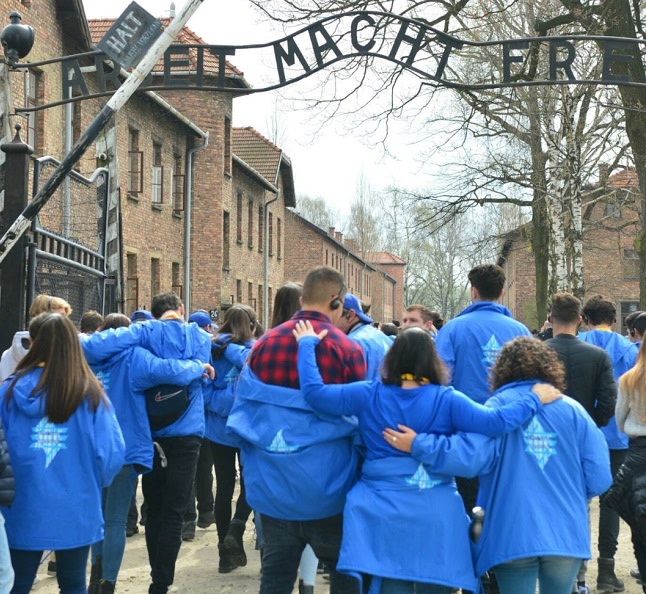 Photo credit - March of the Living

The joint “March of Life” will take place in Berlin on Wednesday the 27th of April 2022 at 17:00 from Anhalter Bahnhof to the Pariser Platz (Brandenburg Gate) for the main ceremony at 18:00.

In addition to Berlin, Marches of Life will take place around Yom HaShoah in nearly 70 locations in 15 nations this year. For the list of venues, see here: https://marchoflife.org/yomhashoah/

Ukrainian Holocaust survivor and refugee, Boris Zabarko, will lead the Berlin march. Boris fled from Kyiv to Germany together with his granddaughter, to escape the war in Ukraine. Marching with him will be Israeli Member of Knesset Ruth Wassermann-Lande; several members of Bundestag; European Director of March of the Living, Michel Gourary, as well as Founder and President of March of Life, Jobst Bittner.

Boris Zabarko commented, “This year's March of Life takes place in a difficult situation, in which humanity is struggling with a global pandemic, and in which the world is shaken by the invasion of Russian troops in the Ukraine, by terrorist attacks in Israel, by crises, disasters, and conflicts. That is why the March of Life is so important and relevant today – knowledge, preservation of memory, a truthful examination of history and its lessons for the whole world. March of Life will demonstrate our commitment both to the souls of the deceased and to ourselves, for the present and the future. We will stand resolutely for human dignity for all, embrace life, give hope, fight violence, and bless freedom, justice and peace.”

March of Life President Jobst Bittner added, “I feel more than ever, an urgency to be active against antisemitism, especially because of the pandemic and the war in Ukraine. I am very grateful that we can stand together with "March of the Living" and other partners, to take to the streets of Berlin on the occasion of Yom HaShoah, from our hearts and on foot against antisemitism and for peace. Education and awareness are important, but only those who allow the truth about the past of their own families or environment to pierce their own hearts and who speak about it personally can bring change and move hearts.”

European Director of March of the Living Michel Gourary added, “The need to preserve the memory of the victims is vital as we are in the final years of having survivors living amongst us. We are working against the clock, and against a constant resurgence of Holocaust denial and distortion. This years’ memorial events – against the background of regional and global turmoil – are of the utmost importance.”

Following the March of Life in Berlin, a delegation will travel on to this year's March of the Living in Auschwitz on April 28, Israel’s Holocaust Remembrance Day. Each year, as part of its flagship event, the leading global Holocaust education program, March of The Living, brings thousands of people to Poland, to march the 3.2km between Auschwitz to Auschwitz-Birkenau in memory of the victims of the Holocaust, as a symbol of the Jewish People’s survival, and to promote awareness and understanding of what can happen when hatred and bigotry are allowed to flourish. After a two-year hiatus due to the Coronavirus pandemic, and against the backdrop of the war in Ukraine 2,500 participants from 25 countries including UK, UAE, Israel, USA, Austria, Germany will participate at the march along with a delegation of refugees from the war in Ukraine.