Victims of Antisemitism at March of the Living: Never Means Never

By INTERNATIONAL MARCH OF THE LIVING

The Jewish Agency for Israel led a global delegation of victims of antisemitism at this year’s International March of the Living. The special delegation was comprised of victims of antisemitism from around the world who conveyed an uplifting message of strength amid rising Jew-hatred. This first-of-its-kind international delegation included individuals who were targeted or lost loved ones in antisemitic attacks in the U.S., U.K., France, Germany, Turkey, India, and Argentina.

The Jewish Agency’s global delegation was headed by the Chairman of the organization’s Board of Trustees Michael Siegal. Accompanied by two members of the delegation, he lit a torch in memory of victims of antisemitism.

“I am privileged and honored to light this torch in solidarity with all the victims of antisemitism around the world,” Siegal said. “As incidents of antisemitism keep increasing globally, The Jewish Agency’s role in championing our shared Jewish story and connecting Jews to each other is more important than ever. May we all continue to keep the memories of Holocaust survivors alive and speak up against antisemitism when and where we see it, to ensure that nothing like the Shoah ever happens again.”

Chairman of The Jewish Agency’s Board of Trustees Michael Siegal (credit: ALONI MOR)

The delegation members participated in a unique three-day program in Poland, which began with a visit to the emergency centers operated by The Jewish Agency in Warsaw, where they met with Jewish refugees who fled the war in Ukraine and are planning to immigrate to Israel. They also visited Nazi labor and extermination camps in Poland.

The members of The Jewish Agency’s delegation included Howard Fienberg, whose mother Joyce Fienberg was killed in the shooting at the Tree of Life Synagogue in Pittsburgh in 2018; Avi Orpaz, whose mother Yocheved was killed in the attack on a Chabad house in Mumbai in 2008; Goldie Horta, daughter of a Mumbai Chabad terror attack victim; Adi Damari, who lost her mother Simcha in a suicide bombing in Turkey in 2016, in which her father was also seriously injured; Miri Ben Zeev Koren, whose husband was killed by a car bomb at the Israeli embassy in Buenos Aires in 1992; Pierre Lasry, whose daughter survived the attack on the Ozar Hatorah school in Toulouse in 2012; and Goldie Horta, daughter of Mumbai Chabad terror attack, Norma Schwarzblatt Rabinovich and Margaryta Paliy from Germany as well as Sarah Taieb Danan from the U.K., who were targeted for wearing Jewish symbols and protesting Nazi symbols.

Members of The Jewish Agency’s delegation at the March of the Living (credit: ALONI MOR)

Pierre Lasry, who was chairman of Ozar Hatorah’s Parents Committee at the time of the attack on the school, said, “When the Jewish Agency invited me to go to March of the Living, I agreed immediately after years of listening to the memories of Jewish survivors, and years of being involved in the Jewish community of Toulouse.”

“Before the trip, I was mentally preparing for something extremely difficult, and although the historical facts were hard in many ways, the gift of the experience is much more encouraging than I expected,” said Goldie Horta. “I met many partners and allies who are working constantly to create a more accepting world that embraces human diversity.”

Margaryta Paliy said what she saw in Poland “is still difficult for me to put into words because there is no explanation for this happening. It was a rollercoaster of emotions, where the fight against evil is fought with love, hope, and togetherness. I was inspired by the strength of everyone who joined our delegation because in my opinion they are true heroes, and they recharge my energy to continue fighting antisemitism and hatred.”

Howard Fienberg added, “United by our loss and our experience facing antisemitism in the modern world, I found support and love in this special Jewish Agency delegation from a group of Jews with diverse backgrounds and ideas. We embraced each other, explored the history of Jews in Poland (from which my grandfather came), felt the despondent terror in Birkenau and Auschwitz, and then countered all the weight of Jewish history and personal history with the March of the Living. It was an unparalleled emotional and intellectual experience. We joined thousands of people eager to recognize and remember the Holocaust, but also to seek a better future for Jews and everyone else in this world. Because we can’t do it alone, having evangelical Christians and an Arab Muslim from the UAE to help lead this year’s march brings me great hope.”

Through the special delegation, The Jewish Agency sought to raise awareness around the fight against antisemitism and to promote efforts to pass on the memory of the Holocaust to future generations. Thousands of Jewish Agency Shlichim (Israeli emissaries) working in Jewish communities around the world are at the forefront of the fight against antisemitism and the commemoration of the Holocaust through their leadership of educational programs. Many of the participants in the delegation of victims of antisemitism have received assistance from The Jewish Agency’s Fund for Victims of Terror, which brings comfort to lives in upheaval by providing emergency assistance and immediate financial aid to survivors of terrorism in Israel and supports Israelis who have been victims of antisemitic attacks abroad. 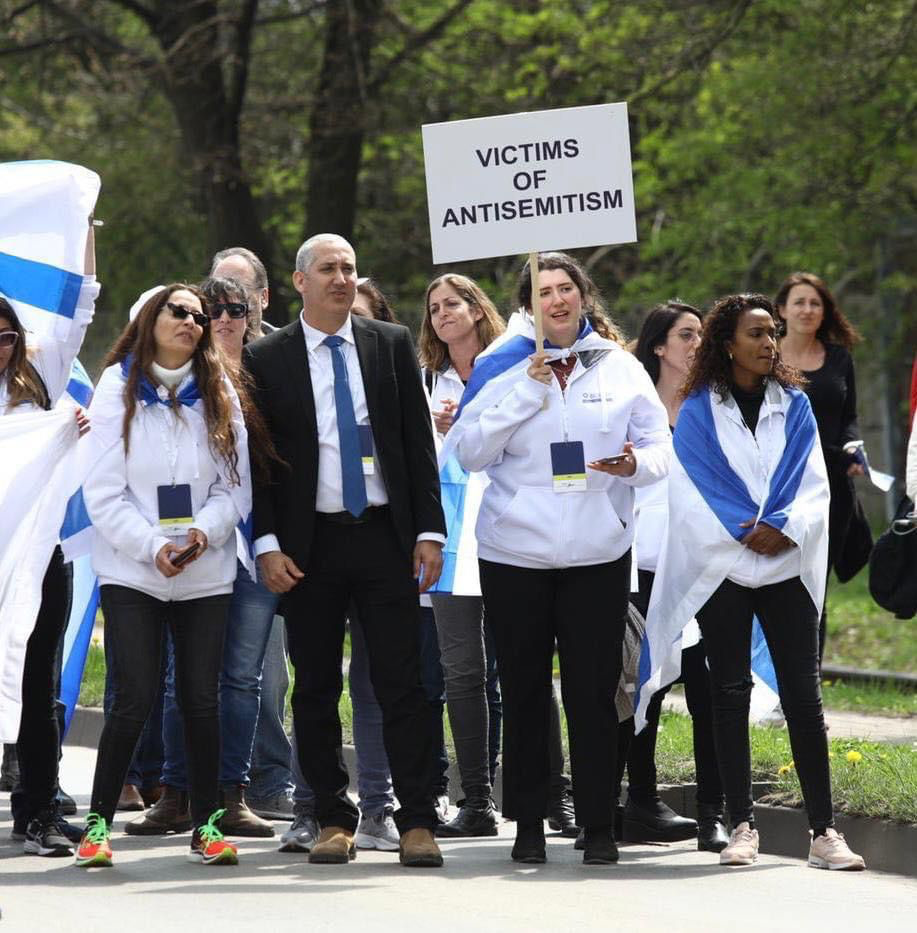 The Jewish Agency’s Chief Operating Officer Yehuda Setton said during the march that he was marching, together with Jewish Agency colleagues and the delegation of victims of antisemitism, at the site where the Nazis “sought to destroy my people and murder my family members. We, the third generation, bear with us the responsibility to pass on the memory of the Holocaust to future generations and at the same time, to wage a decisive and uncompromising struggle against antisemitism.”