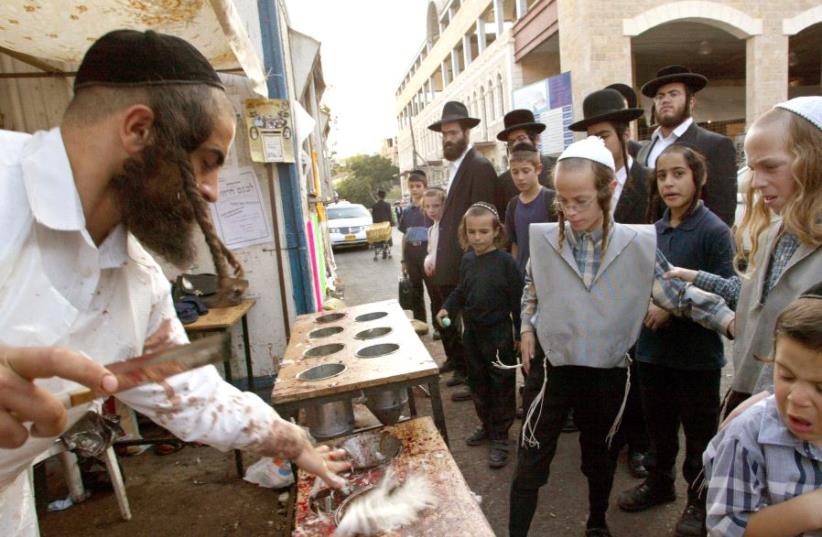 DATE IMPORTED: October 07, 2003 Group of ultra-Orthodox Jews watch a butcher put drain the blood from a slaughtered chickens in the Mea Shearim neighbourhood in Jerusalem October 2 2003
(photo credit: REUTERS/GIL COHEN MAGEN)
Advertisement
European Jewish leaders on Thursday slammed a decision passed by Belgium’s Flanders Region to ban the slaughter of unstunned animals, which thus outlaws shechita according to Jewish law as well as Islamic halal practice.With Wednesday’s decision, the Dutch-speaking Flanders joined the country’s French-speaking Wallonia Region, which passed a similar decision in May. The third region, Brussels, is an officially bilingual enclave within the Flemish Region.Rabbi Pinchas Goldschmidt, president of the Conference of European Rabbis, slammed the development saying: “The news that the Flanders Region of Belgium has joined Wallonia in passing a legislation banning religious slaughter is a clear attack on religious practices and a worrying omen for the future of religious rites across Europe.“We cannot tolerate bans on religious practices,” he said.He called on leaders across Europe to protest against the ban and to work to protect religious freedoms.Both Judaism and Islam require that butchers swiftly slaughter the animal by slitting its throat and draining the blood, but most animal rights campaigners say it is more humane to stun animals electrically before killing them.Brussels Chief Rabbi Avraham Guigui has countered this argument with studies that found shechita to cause less stress to the animals; he charges that activists have chosen to ignore such findings.