Sitruk served as chief rabbi for over 20 years. 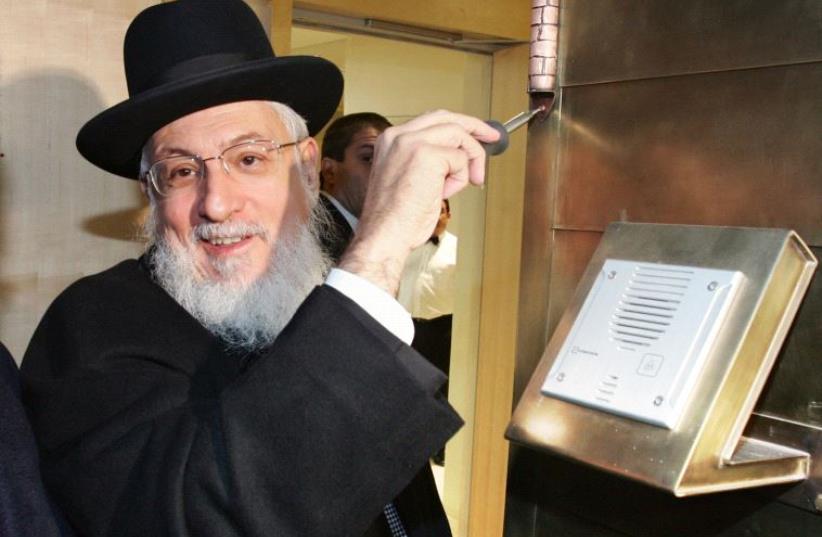 Former chief rabbi of France Joseph Haim Sitruk
(photo credit: JACK GUEZ / AFP)
Advertisement
Former chief rabbi of France Rabbi Joseph Haim Sitruk died Sunday at the age of 71.He died in hospital where he had been for several days.Born in Tunis in 1944, Sitruk moved to France with his family, where he was ordained in 1970 and was appointed rabbi of Strasbourg. He later served as the assistant of then-Chief Rabbi Max Warchawski.Before taking on the top rabbinical role in the country, Sitruk became chief rabbi of Marseille. Sitruk served as France’s chief rabbi from 1987 to 2008, when he was replaced by Rabbi Gilles Bernheim.He also served as the president of the Conference of European Rabbis for 12 years.Incumbent CER President Rabbi Pinchas Goldschmidt said: “Sitruk gained international respect from the entire spectrum of European rabbis and European leadership, which we witnessed when he headed the conference.”Goldschmidt lauded Sitruk for having generated a spiritual renaissance of France’s Jewry, which counterbalanced assimilationist tendencies prevalent in France.“I still remember my first meeting with him when he was rabbi of Strasbourg and later as rabbi of Marseille. He was a young energetic and charismatic leader with integrity and faith,” Goldschmidt said. “These strengths led him later to be elected chief rabbi of France and after the death of Rabbi Lord [Immanuel] Jakobovits, [the Commonwealth’s chief rabbi,] the first non-British president of the CER.”In 2007 Sitruk was appointed commander of the Legion of Honor.The ultra-Orthodox Shas movement praised Sitruk for elevating French Jewry through gentle, graceful work and well-established ties with the authorities in order to promote the needs of France’s Jewish community. Shas also made reference to the warm relationship Sitruk had with Rabbi Ovadia Yosef, the late former chief Sephardi rabbi, with whom he consulted on many issues.A few months ago, Sitruk made waves when he called Tel Aviv’s gay pride parade an “abomination” and “attempt at moral extermination of the People of Israel.”“The Torah determines that homosexuality is an abomination and considers it a human failure. The danger seems to me grave enough for everyone to shout their opposition in the face of such an offense,” Sitruk told Radio J, as reported by Actualité Juive weekly. “I hope the listeners will react in a radical manner to this abomination.”The comments drew condemnation from several French Jewish organizations.But French Chief Rabbi Haim Korsia defended Sitruk to the weekly, saying he would never call for violence.Sitruk is survived by his wife and nine children.JTA contributed to this report.