The nuptials of Jewish nobleman Ivor Montagu and his bride Eileen Hellstern sparked outrage in England in the late 1920s. 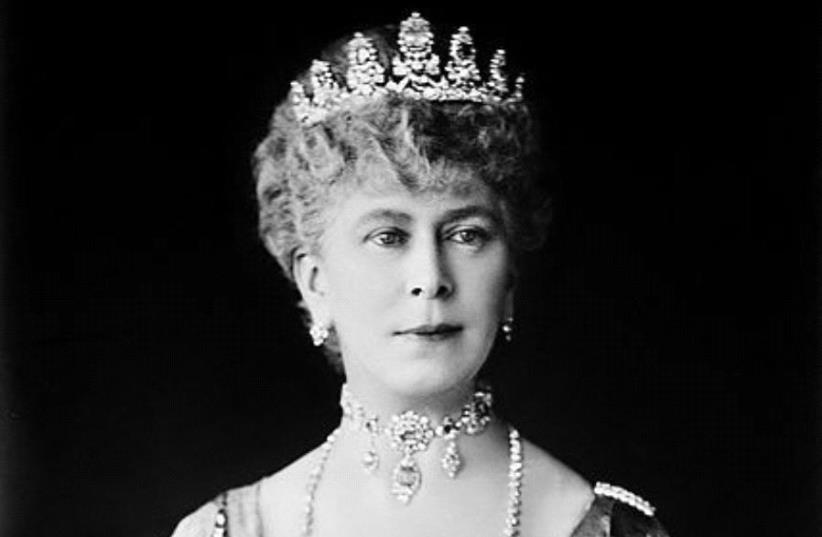 Queen Mary of Teck
(photo credit: WIKIMEDIA COMMONS/BAIN NEWS SERVICE)
Advertisement
Ninety years ago, JTA published a short article detailing the elopement of the son of a British Jewish baron and his new wife, who — gasp! — was the daughter of a shoemaker.The wedding was so scandalous, it turns out, that even the Queen of England sent her condolences to the groom’s mother. The JTA article, published on Feb. 23, 1927, begins this way:

Swaythling’s Son Elopes with Cobbler’s DaughterLondon is agog at the elopement of Ivor Montague [sic], aged 22, the youngest son of Lord Swaythling. The young son of Lord Swaythling was married secretly yesterday at the Registry Office to Miss Eileen Hellstern. Miss Hellstern is a typist and the daughter of a shoemaker.

What was all the outrage about?Ivor Montagu was born in 1904 into a powerful Jewish banking dynasty that was one of the wealthiest families in the country and were members of the British nobility.Ivor’s grandfather, Samuel Montagu, founded the bank Samuel Montagu & Co., and served in the House of Commons. In 1907, King Edward VII made him baron of the Southampton suburb of Swaythling, a hereditary title that he would pass down to Ivor’s father, Louis.Marrying a commoner apparently was not part of the expectations for the Montagus. Louis considered Ivor’s marriage to Eileen — a Jewish divorced mother of one who went by the nickname “Hell” — to be “an irredeemable calamity,” Nicholas Griffin wrote in “Ping-Pong Diplomacy: Ivor Montagu and the Astonishing Story Behind the Game” (more on that shortly).Griffin recounts the dramatic conversation that ensued after Ivor announced that he had married:

His father stared at him. “Who is she?”
“Nobody you’d know,” said Montagu, giving a brief description of his bride.
His father was stunned into silence. After a while, he looked up at Montagu and asked, “Is she a Jewess?” She was indeed. “Why did you have to marry her? Is she going to have a baby?”
To Lord Swaythling, Montagu’s marriage was “an irredeemable calamity.” His mother entered the room in her dressing gown, and Ivor Montagu watcher her stoop to console his father. He walked downstairs and let himself out.

The marriage wasn’t only news for JTA — it ran on the front pages of all the newspapers in London, including The Evening Standard, which proclaimed “Baron’s son weds secretary,” according to Griffin.Ivor’s mother, Gladys, received dozens of condolence notes, including from her close friend, the Queen of England, Mary of Teck.“Gladys I feel for you,” the queen wrote to Ivor’s mother.The second Lord Swaythling, meanwhile, was so furious at his son that he changed his will, reducing Ivor’s inheritance by three-fifths. Though the parents quickly began to warm up to Eileen, Louis died shortly thereafter and did not restore the will.Ivor went on to live an eclectic life, working as a filmmaker, playing and popularizing tournament table tennis and, some say, spying for the Soviets. He and Eileen stayed married until their deaths in 1984, a month apart from each other.In the film industry he was as a producer, director and critic, working with Alfred Hitchcock on a few films, including “The Man Who Knew Too Much,” “The 39 Steps,” “Sabotage” and “Secret Agent,” according to “The Alfred Hitchcock Encyclopedia,” by Stephen Whitty. He also collaborated with the notable Soviet filmmaker Sergei Eisenstein.Ivor and Eileen lived in Hollywood in the late 1920s, where they enjoyed the company of none other than Charlie Chaplin, according to his obituary in The Times.As an athlete, Ivor represented England in table tennis matches around the world, and was one of the founders and the first president of the International Table Tennis Federation, which still functions as the international governing body for the sport.In his leadership role at the federation, Ivor made efforts to connect with the communist People’s Republic of China, which was then isolated from much of the West. In 1951, Ivor invited China to join the group and compete in its world championships, a significant gesture since the country was only a member in two other international sports organizations and would not join the United Nations for another 20 years, according to the “Oxford Handbook of the History of Communism.”In the 1970s, “ping-pong diplomacy” opened up relations between the United States and China.Politically, Ivor was involved in far-left causes, first joining the British Socialist Party and then the Communist Party of Great Britain, according to Griffin.In 1959, the Soviet government awarded him the Lenin Peace Prize.Public opinion, it seems, was the last of Ivor’s worries, whether it came to his marriage or political activities.