Antisemitism is everywhere, he told a meeting of the Israel Council on Foreign Relations (ICFR) on Tuesday, but it is less prevalent than in other parts of Europe. 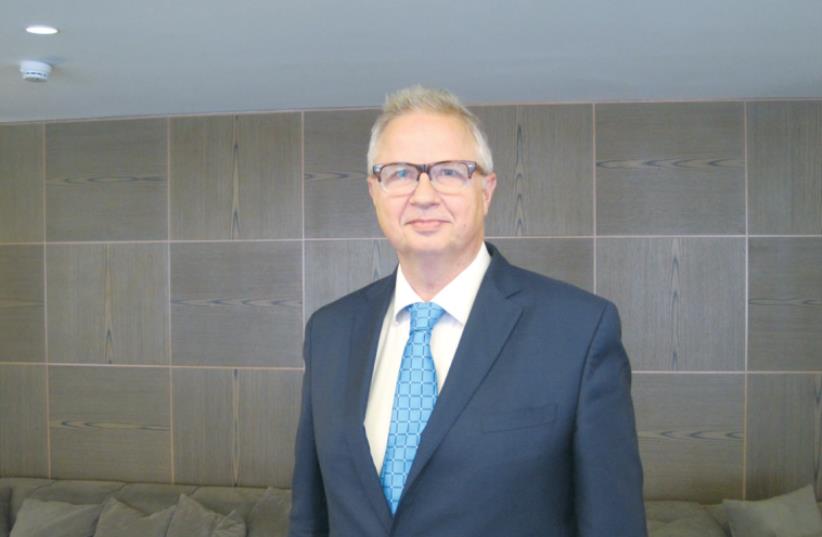 HUNGARIAN JUSTICE MINISTER Laszlo Trocsanyi criticizes the EU’s ‘weakness and lack of pride in Christian-Jewish Europe.’
(photo credit: YONAH JEREMY BOB)
Advertisement
Visiting Hungarian Justice Minister László Trócsányi doesn’t pretend that there is no antisemitism in Hungary.Antisemitism is everywhere, he told a meeting of the Israel Council on Foreign Relations (ICFR) on Tuesday, but it is less prevalent than in other parts of Europe, adding that the Hungarian government does plenty to preserve the memory of the Holocaust.There were some in the audience who were disturbed by Hungary’s legislation on illegal immigration, which has been dubbed the ‘Stop Soros’ law – named for Hungarian-American billionaire George Soros who supports many left-wing causes.Soros is Jewish, and even among Jewish groups who strongly disapprove of him it is felt that there was more than a hint of antisemitism in naming the law after him. Jews also silently protested over Hungary’s recognition of Miklos Horthy as a national hero, who sent thousands of Jews to Auschwitz.Trócsányi, who is in Israel to seek greater cooperation between Israel and Hungary on international legal issues, has already met with Justice Minister Ayelet Shaked whose name he pronounced in his address with a Hungarian emphasis on the vowels, making it sound quite different from how it sounds in Hebrew. Speaking of the bilateral relationship, Trócsányi said that “Israel is a very important country for Hungary.”The lecture at the Van Leer Jerusalem Institute was moderated by ICFR President Dan Meridor, a former justice minister who worked for eight years with Trócsányi in the Venice Commission, a board of the Council of Europe. While Trócsányi is no longer part of that process, Meridor remains. Founded in 1990 after the fall of the Berlin Wall, the Commission of Venice is composed of experts in constitutional law. Trócsányi is a professor of constitutional law; he worked as a barrister for 25 years and then as an ambassador prior to joining the government.Born in 1956 during the Hungarian Revolution, Trócsányi attached some significance to the fact that he spoke in Jerusalem on October 23, the very anniversary of the uprising.With regard to Soros, the minister confirmed that he is a Hungarian citizen and is permitted to enter and leave the country as he pleases. As for Horthy, Trócsányi explained that while the Hungarian government condemns the wrong done against the country’s Jewish population, he was responsible for restoring Hungary’s territorial integrity. Over the centuries, Hungary had been occupied and annexed by a series of foreign powers; Horthy regained parts of conquered territory and restored the country’s identity. TRÓCSÁNYI SPOKE on the same day as Israeli jurists met at the President’s Residence to mark the 70th anniversary of the legal system, where several complained that politicians are attempting to undermine the Supreme Court. Trócsányi noted that there is conflict between the law and politics, since Hungarian politicians are also trying to modify the law.Law is apparently as popular a profession in Hungary as it is in Israel. In the former, there are 600 people working in the justice ministry, 3,000 judges and 10,000 barristers – 6,000 of them in Budapest alone.Similar to the Jewish state, it has problems with NGOs that are funded by foreign sources. Trócsányi said that there are around 60,000 in Hungary that want to “educate” Hungarians how to think and what to do. “The government position is ‘that’s your view not ours,’” which has generated a lot of ideological debate and legislation where all foreign-funded NGOs must report their source of income.Following the Hungarian elections of 2010, which were won by a two-thirds majority – quite rare in Europe – Hungary adopted a new constitution. This provoked a lot of debate in Europe. As a small country surrounded by large countries, “We wanted to emphasize who we are as a nation, a state, a people – and our values,” said Trócsányi. Under the previous constitution, the emphasis had been to protect the legal order; under the new one the emphasis remains protecting citizens and their rights.Looking back at Hungary’s history of being “dominated and occupied” by foreign powers, Trócsányi declared that it is a miracle that Hungary exists at all. “For us, freedom is very important. That’s in our Constitution. But we are members of the EU, so how do we maintain our freedom?”It is difficult for Hungarians to accept the differences between the old and the new Europe, said Trócsányi, who spoke of double standards among some countries that define themselves as independent and democratic, when that is far from true.He pointed out that words like “democracy” have different definitions in different countries, as well as “freedom of the press.” In Hungary, anyone can express their views about anything, but in Belgium for instance, a contract he had made to publish a book was canceled since the publisher didn’t approve of Hungary’s political policies. A similar incident occurred when the minister was due to address a Belgian university. Two days prior to the scheduled date, he was informed that they didn’t want to provide a platform for Hungarians.The country has come under great criticism in Europe for its strong anti-illegal immigration laws. Under the Geneva Convention a refugee seeking asylum should remain in the first safe country that he reaches and not use it to cross into another country, he said.Most refugees are interested in reaching Germany. After a million people crossed the Hungarian border in 2015, Hungary as well as other Schengen-area countries free of mutual border controls decided to build a fence to limit future passage.