Siamak Morsadegh discusses the status of Jews in Iran and the prospects of an Iranian-Israeli war. 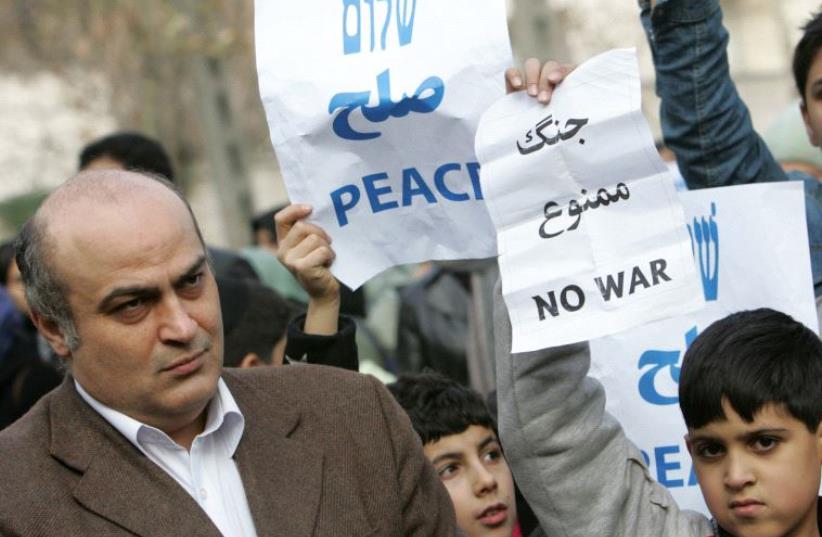 Siamak Morsadegh
(photo credit: BEHROUZ MEHRI / AFP)
Advertisement
Some dubbed him “Rouhani’s Jew” and before that “Ahmedinejad’s Jew,” but Siamak Morsadegh (Moreh Tzadek, “righteous teacher” in Hebrew) is much more than this: He’s “the No. 1 Jew” in Iran.Morsadegh was recently sent to Paris as part of a delegation led by the chairman of the Iranian Parliament’s Foreign Policy and National Security Committee, Alaeddin Boroujerdi, who introduced him during his speech to the Diplomatic Academy in Paris as Iran’s only Jewish member of Parliament, emphasizing how honored he was by his presence.This is Morsadegh’s third term as an Iranian MP, totaling nine years. Last year he was reelected with 70% of the Jewish population’s vote, which he says numbers some 25,000 people. Like other religious groups in Iran, the Jewish community has a reserved seat in parliament.He was born in Shiraz to a family that produced many of the Jewish community’s leaders. As a medical student, he was active in the socialist youth movement that supported the revolution and served for a long while as the editor in chief of a Jewish newspaper. Later he served as a medical professor and was appointed the head of Jewish Committee of Tehran and the director of the Jewish hospital, Sapir. “I am a Jew and an Iranian,” he says of himself.“I pray in Hebrew but think in Farsi. I am religious and observe the Sabbath like most of Iran’s Jews.”In 2013, when he accompanied Iranian President Hassan Rouhani during his first trip to the UN General Assembly, his presence was a sensation.The media quoted his harsh condemnations of Israel, as well as what seemed like exaggerated praise for the ideal conditions for Jews in Iran.Today, with Iran being welcomed back by the family of nations and in his first conversation with an Israeli journalist, his comments seem far from the clichés attributed to him.“Iran is much safer for Jews than France and there is no need for security at synagogues,” Morsadegh said. The small difference is, of course, in freedom of expression and in fear of the watchful eye of the government.“In the history of Iran, Jews have never been forbidden from being in any city, not even in the holiest,” he said.“We have no problem with religious freedoms. We have a synagogue, school, kosher butcher, kosher restaurants.There are many Jewish organizations which deal with preserving the Jewish cultural legacy, cemeteries and special sites for ceremonies. However, we are a minority in a religious Muslim state, and that creates a few problems.“As a Jew in Iran, the highest position that can be attained is member of Parliament, and there is only one such position. A Jew cannot be president, a minister or deputy minister and cannot have an official role in the army. In order to hold these positions, you must be Muslim.But you can, for example, get the highest degree possible from the university and teach. Many Jews learn at the university, and there are some Jews who lecture there,” Morsadegh said.

Do tensions between Iran and Israel influence the treatment of the Jewish community? “Always, even before the revolution, the Iranian government distinguished between Jews and Zionists. And to be a Jews does not mean that you agree with everything Israel does. When there is criticism of Israel, it does not constitute a problem for us. True, there may be people who start to ask questions about Jews during a bad crisis with Israel, but in our daily life we see Judaism and Zionism as separate entities.”

There were serious allegations of spying against Jews in Shiraz.“There were all kinds of affairs, but now the situation is better, and I think that it will continue to improve everyday. There are a few more legal problems. Up until a few years ago there was a difference between compensation payments for the death of Muslims and non-Muslims, but following a fatwa from the Ayatollah Khamenei, today they are the same.Or, for example, inheritance law, which favors Muslims or Muslim converts. If the other beneficiaries belong to another religion, they will be disinherited.It is a law from one hundred years ago and we are making efforts to change it.”Holocaust denial exists in Iran today. How do you in the Jewish community deal with this? “The Holocaust is reality. I am a Jew, and I believe that everyone knows that the Holocaust is a real historic event. Anybody who wants to deny the Holocaust – it’s as if they are denying life, denying that the sun exists.We protested. We sent a letter to Ahmedinejad in which we said that this was unacceptable behavior. Holocaust denial is not a national interest of the Iranian people.Holocaust denial will only serve to help, for example, the extreme Right in Israel.”From the Holocaust, we move to Israel’s diplomatic situation, an area in which Morsadegh shows great knowledge. He doesn’t necessarily sympathize with every position formally supported by Iran.“I think that all of the Jews and all of the Muslims can live in complete peace if the extremism ends,” he said.“For example, if Israel would have reached a good agreement with the PLO during the time of the Rabin government, it would not be facing Hamas today. Whenever you fail to negotiate with a moderate enemy, you have to deal with an extremist enemy.The extremists on each side need each other. The Muslim extremists in the world need Netanyahu, and Netanyahu needs them. They are supposedly against one another, but in my opinion they help each other in their election campaigns and in sustaining the balance of power.”At the same time as I’m speaking with Morsadegh, next door, chairman Boroujerdi declares that Iran will continue to develop its missile capabilities, because “this is the only way to defend against the 200 nuclear bombs in the hands of the Zionists.” I ask Morsadegh if despite such aggressive declarations there is, in his estimation, a chance for a future understanding between Iran and Israel.Morsadegh is optimistic: “Politically speaking, anything is possible, but clearly, until all of the peoples of the Middle East have their full rights respected by the government of Israel, it will not be ready for peace. I think that a two-state solution, or any solution that ensures Middle East peace, will be supported by all nations. It has already been stated many times that Iran is not interested in starting a war with Israel because it knows that anyone starting a war in the Middle East is committing an act of suicide. It is a crowded part of the world and anyone starting a war here is ending his life. I think that Iran’s leaders are sane enough and smart enough to prevent a war with Israel. I admit that a few years ago, I was suspicious of Netanyahu and I thought that he was crazy enough to start a war. Today I think that the situation has improved somewhat after the nuclear deal, and a war between Israel and Iran is an unacceptable possibility.”