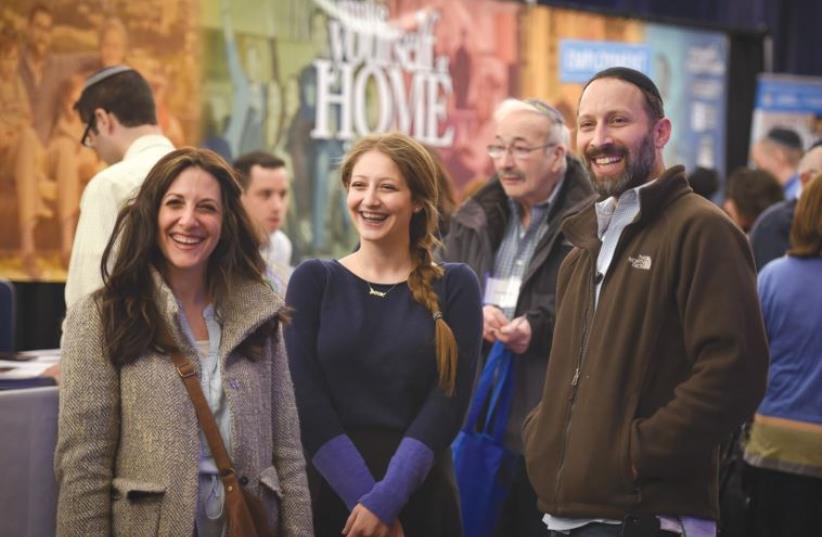 RACHEL (LEFT), ABBY and Bentzion Raice attend the aliya fair in New York Sunday
(photo credit: SHAHAR AZRAN)
Advertisement
NEW YORK – A record number of 1,300 people registered to attend this year’s Nefesh B’Nefesh New York City aliya fair this Sunday, according to NBN Executive Vice President Zev Gershinsky.“We ended 2015 with nearly 3,800 olim,” he told The Jerusalem Post at the event. “We are aiming to pass our 4,000 people goal this year and the registration for this event indicates we are on the right track. It was the highest ever and we see great interest in moving this year.”The fair, held at a Times Square hotel, was part of Nefesh B’Nefesh’s “Come Home to Israel” tour, which will take place in eight cities across North America this month including Los Angeles, Montreal, Toronto, Baltimore, Washington, Chicago and Fort Lauderdale.The aliya fairs are all co-hosted by NBN, the Immigration and Absorption Ministry, the Jewish Agency, Keren Kayemeth LeIsrael-Jewish National Fund and JNF-USA.In each city, NBN aims to provide potential olim with critical information about the immigration process with vendors and programs represented in the different booths in order to give potential olim a chance to inquire about the logistics and long-term implications of making aliya.Gershinsky told the Post that the main concern for olim in general is usually finding employment in Israel but also learning Hebrew and navigating Israeli bureaucracy.“I think our motto here is ‘One step forward,’” he explained. “Not giant leaps, not a huge move but ‘One step forward,’ which means ‘Come and explore.’ “Aliya is something we encourage, we want to help you feel confident it’s something you can do and be successful at,” he continued.“This event gives you the empowerment and confidence you need to make that one step forward.”Aliya from North America, Gershinsky also explained, is “aliya by choice,” whereas aliya from countries like France or states of the former Soviet Union can sometimes be a way to escape anti-Semitism.“We know that people making aliya from the United States or Canada are choosing Israel because they believe it is the right place for them to be,” he told the Post. “That’s how we view it and how we treat the olim.”Among the attendees at the fair were Rachel and Bentzion Raice and their 15-year old daughter Abby.“I’ve always wanted to live there, and then you get caught up in America and the kids are young and then at some point you stop and think, ‘Hang on, I’m still here. Why am I still here?’” he told the Post.“I follow what’s going on in Israel, I’m always following the news and my heart is there,” he added. “We know it’s gonna be a challenge, we know it’s gonna be tough and we’re happy Nefesh B’Nefesh helps us because without it I don’t think we’d be doing this at all.”Bentzion’s wife, Rachel, admits that the idea of moving took “a little more warming up” for her but she now feels more ready than ever before to take the leap. The couple’s oldest son already lives in Israel and has been pushing for them to move.Abby Raice, one of four siblings, told the Post she is excited about the idea of moving to Israel and feels a “pull toward the land.”“You know, Americans have America, the French have France and the Jews have Israel,” she said.“My biggest worry is that I’ll go and I’ll hate it or I won’t be able to adjust properly,” Abby admitted. “It’s a hard process, it’s a lot of emotional energy, it’s scary as a teenager but I think that overall when you know you’re doing something that’s right it doesn’t really matter what it takes to get there.”Moshe Greene who also attended the event, said the situation for Jews in America could constitute a reason to move to Israel.“You see Europe being taken over by the Muslims, and you see slowly but surely Canada, America, Australia; these places are also affected. You can’t escape it,” he said.“I won’t call Israel safe, but I’d rather be fighting with a country that is definitely there for our security,” Green added.Since it was founded in 2002, Nefesh B’Nefesh has organized more than 50 aliya flights from North America and is approaching the 50,000 olim mark.