No fanfare for Venezuelan arrivals in Israel

Case of Conservative converts source of dispute between religious leaders and Interior Ministry. 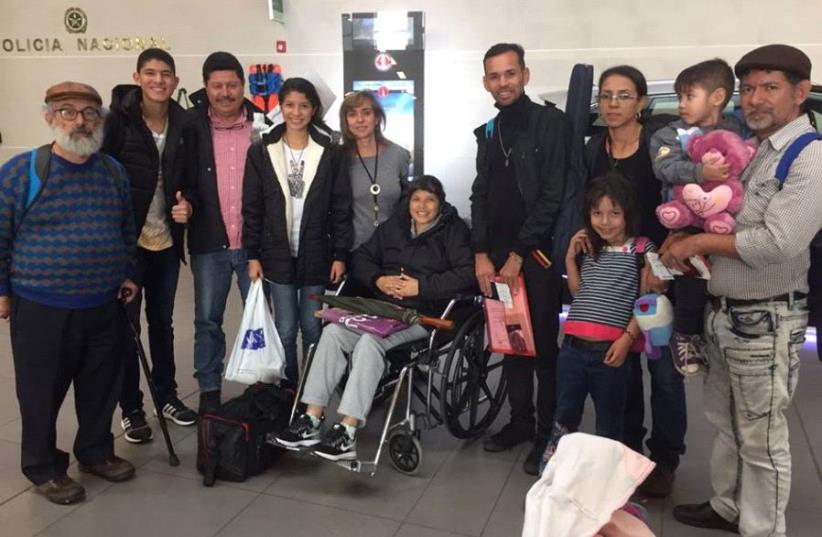 Venezuelan converts in the Bogota airport on their way to Israel.
(photo credit: FACEBOOK)
Advertisement
While many olim are greeting by ceremonious events put on by the Jewish Agency and the Immigrant Absorption Ministry, nine Conservative converts from Venezuela are expected to slip into Israel inconspicuously on Thursday morning.The story of the three families from the rural town of Maracay garnered international headlines and caused a dispute between the Interior Ministry, the Jewish Agency and the Conservative movement as the former rejected their aliya applications, stating that they did not meet the requirements for converts to make aliya due to a lack of affiliation with a recognized Jewish community prior to their conversions.In January, a solution was reached in the Knesset that the group, which had gone through Conservative conversions, would be converted again immediately by a Conservative rabbi and be allowed to come straight to Israel on A5 visas. They would be entitled to receive the social benefits granted to olim, and after being affiliated with a recognized Jewish community for at least nine months following their second conversion, should qualify for citizenship.The affair, however, appears to have left a bad taste in the mouths of all parties concerned; leaders of the Conservative movement were insulted by the obligation to convert the group again, while the Jewish Agency has accused the former of attempting to bend rules that they themselves agreed upon.Speaking with The Jerusalem Post on Tuesday, Jewish Agency Chairman Natan Sharansky described an agreement on the subject of aliya for converts, reached in 2013 between the Interior Ministry and the Reform and Conservative movements, as one of the biggest achievements for relations between those bodies.“So what to celebrate? That they tried to undermine the same rules it was so difficult to make?” Sharansky asked. “One of the conditions is that they live for nine months in a recognized Jewish community. It was agreed, there were many corrections brought by the movement that were included and it was agreed.“There was a huge international campaign, and only after that they came to me,” Sharansky said of the case of the Venezuelans. “I told them they are nullifying their biggest achievement.“They went through conversion without living one day in a recognized Jewish community... so, the Interior Ministry cannot give you citizenship. Conversion is not passing an exam in history or math... it’s a way of life,” he said, emphasizing the importance of that clause.
Synagogue in Venezuela vandalized in 2009 , antisemtic motives (credit: REUTERS)
Conservative leaders and MKs who supported the Venezuelans’ case argued that they must be brought to Israel immediately based on humanitarian concerns over the dangerous situation in their home country. Venezuela has seen an escalation of crime, murder and poverty in recent years since plummeting into economic crisis, and at least two of the converts had been robbed and physically threatened, one at gunpoint.Leading Conservative Rabbi Andy Sacks described the criteria as a “catch-22” for the Venezuelans, maintaining that in Latin America converts are not accepted in recognized communities.The rabbi who oversaw their conversions, Oklahoma- based Rabbi Juan Mejia also raised a need to address the situation of “emergent communities” springing up in places where there either is no established Jewish community or, if there is, they might not be welcome in it.Mejia and Sacks both pointed to the Bnei Menashe brought to Israel by Shavei Israel, as an example of converts who make aliya with no problem and are allowed to complete their conversions in Israel. But Sharansky said their situation is different because of their historical connection to the Jewish people.Sharansky also refuted claims by Conservative leaders that had the applicants been Orthodox converts they would have been treated differently.“There were three cases in the last years where Orthodox converts didn’t have recognized communities and they were not approved by the Interior Ministry and the state would not give them citizenship,” he said.Sharansky did, however, acknowledge that since converting, the Venezuelans had been members of an organized Jewish community in Valencia for more than a year, which allowed for the compromise deal that lets them to move to Israel immediately.“It had to be solved and I’m glad I helped solve it...but not to try to turn it into a game without rules,” Sharansky said, clarifying that he is not opposed to celebrating the arrival of the Venezuelans per se, but opines that the Conservative movement should not be highlighting this case specifically, which he views as “problematic.”